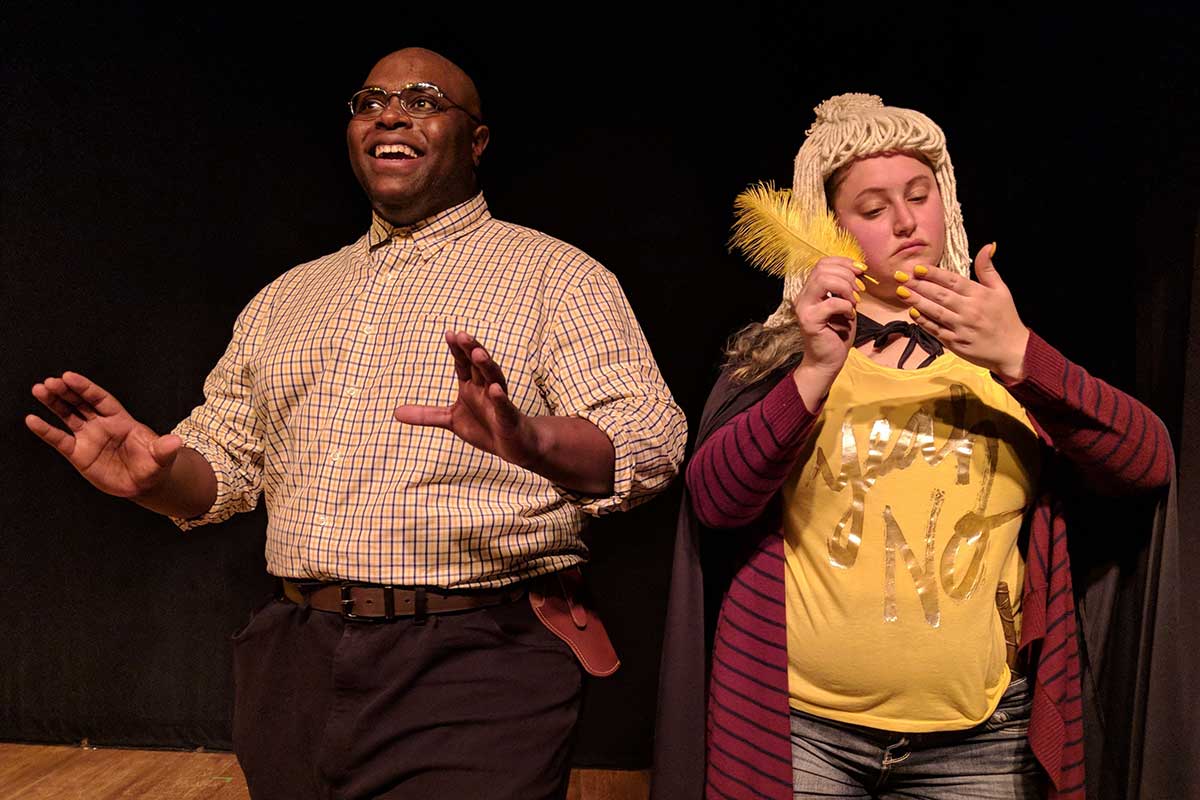 The local premiere of Matt Cox’s off-Broadway smash Puffs marks a generational departure for executive director Dan Tursi’s 14-year-old Rarely Done Productions. Although the company has been dark for a few months, its core audience is still robust, as was seen in the well-attended 50th anniversary production of Mart Crowley’s The Boys in the Band last winter.

For this outing (running through Saturday, May 11, at Jazz Central) Tursi has turned over the reins to Krystal Wadsworth with a cast of 11 mostly new faces in as many 30 roles. Then again, as Rarely Done has always favored the paradigm-busting and the irreverent, Puffs fits well in the company aesthetic, but at an angle.

Opening in New York in January 2016, Puffs did turn-away business and is still running, making it a rarity for any local company to produce. The full title is Puffs, or Seven Increasingly Eventful Years at a Certain School of Magic and Magic. It’s a parody of one of the greatest English-language literary and cinematic sensations of the past 22 years. Well, that and more. A disclaimer on the Puffs website says the show’s efforts are not supported by Warner Brothers, the makers of Free Willy and the Rocky franchise, Sylvester Stallone or AOL Instant Messenger. The targets are wide-ranging and, ahem, sensitive.

Wadsworth, who is Puffs’ designer as well as director, gives us a look and an ambiance that communicate as much as playwright Cox’s words do. Costumes might be thrift-shop discards. There is no set, and some props malfunction consistently, like lightning wands that blink off. A handful of performers, such as frequent leading man Daryl Acevedo, might easily be cast in a conventional play, but most have the look of character hires from central casting. That’s because they see themselves as supporting players in somebody else’s story.

As the subtitle reminds us, action is supposed to be unfolding over seven years in the two hours of the performance. Once the frenzied opening settles down, we focus on Wayne Hopkins (T.J. Cravens) from New Mexico, neither brave nor intelligent. Cravens, last seen in Central New York Playhouse’s Mamma Mia!, is conspicuously bald with protruding corpulence swathed in a Super Mario T-shirt. Like the other entering students he is 11 and will look pretty much the same at age 18 for the final curtain. Hey, it’s a willing suspension of disbelief.

Not friendless, he soon bonds with two others to make a trio that does not aspire to save the universe. One is the alleged math whiz who cannot spell, Oliver Rivers (Donovan Stanfield), and the other is the frequently scowling Megan Jones (Jackie Bleich).

Stanfield, a large physical presence, has made lasting impressions in previous small roles, including Garrett Heater’s Cabaret (July 2016). Bleich has been in a number of Central New York Playhouse productions such as 1984 (August 2017). Although Bleich is almost petite when linked to the two guys, their frequent on-stage triad-embraces make for formidable monument of shimmering human flesh, a snickering tease of the two-guy-one-girl trio seen pictured over the last two decades.

The anfractuous story line, such as it is, requires attention to follow. Aiding us is a helpful Narrator (Jonathan Fleischman) who doesn’t shrink from stepping into one of those fleeting roles. As the passing school years are announced we perceive that the fifth year (age 16) ranks high in anxiety, whereas the sixth year signals an awakened sexuality. There is also a shift in tone after the intermission.

Meanwhile, the volume of allusions is so dense that future audiences are going to need Cliff’s Notes to keep track. The eager near-to-capacity opening-night audience at Jazz Central appears to have been drawn from Puffs’ reputation as a hard-to-get ticket. Laughs should have been coming about one-a-minute, however, but they were unevenly distributed across the crowd.

On more than one occasion Daryl Acevedo is seen with a strip of masking tape flattening his nose, an evocation of Ralph Fiennes playing a character we cannot name in a film that must remain anonymous. Multiply that by 20.

Some brief segments stand on their own without context. Klaxon-voiced Danny Monroe, who gets more than his share of laughter throughout, storms in as a profanity-spouting athletic coach in one short sequence. The character’s function is not to shape up the team but rather to humiliate and eject those student losers, or Puffs, who don’t measure up. His show-stopping moment just about provoked its own ovation.

Director Wadsworth has a long association with Simply New Productions. Under her earlier name Krystal Scott, she was one of the hottest cheerleaders in the landmark production Debbie Does Dallas (June 2007). Her pacing here is fevered. Lines are shouted and proclaimed and never whispered. She assumed that’s the mode to follow for Puffs, especially when the name of the object of satire dares not have its name spoken.