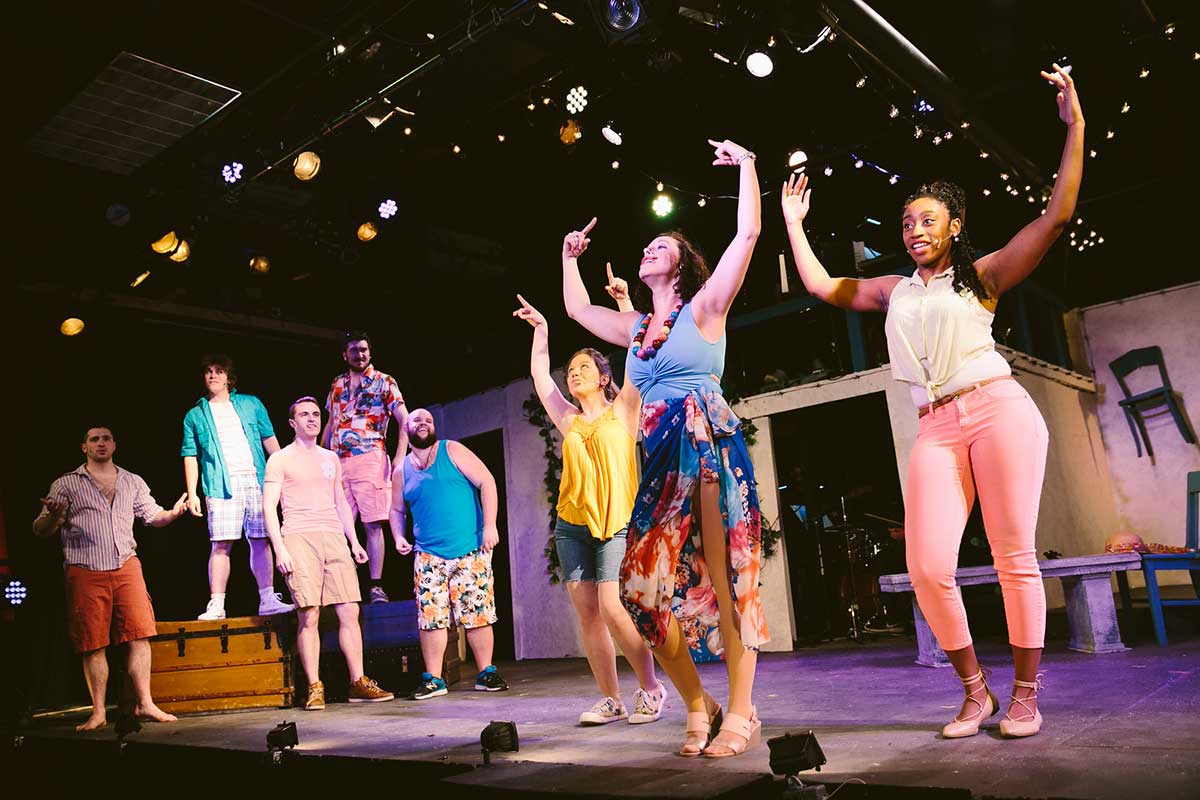 “Mamma Mia!” could be one of Central New York Playhouse’s biggest stage hits of the last seven years.

Central New York Playhouse’s nearly sold-out run of Mamma Mia! (through March 2) is the first of what looks like a flood of productions to come. Rights to the much-loved jukebox musical, based on materials from Benny Andersson and Bjorn Ulvaeus’ pop group ABBA, have become available only recently, and artistic director Dustin Czarny’s Central New York Playhouse was the first to grab the prize.

Director-choreographer Stephfond Brunson and music director Abel Searor have set themselves out to make Mamma Mia! the production for the other companies to beat. And getting such a megamusical to fit inside the troupe’s intimate space is this mounting’s first achievement.

Applause for scenic designer Christopher James Lupia’s clever use of space management. He evokes the Greek islands with only a bright blue stairway and a door at stage left, flanked with white stucco. More importantly, he places the ensemble in a Mediterranean tavern at right in the middle, where all the musicians sit, including a specialist with the dulcet-sounding hammerkat.

The stage also removes more than 50 percent of the dance space, but Brunson gets up to 20 people moving at a time, in one number with flippers. They never look cramped, although high kicks are limited.

As Donna, the mother who juggled three boyfriends 21 years before the beginning of the action, Becky Bottrill makes what could be billed as a return engagement. Known for characters of imposing presence like Miss Mona of The Best Little Whorehouse in Texas, as well as virtually owning the title role of Always. . . Patsy Cline for many years, Bottrill had not been singing much recently. Here she does a lot of the heavy lifting, starting with “Money, Money, Money,” but she must also be a campy comic when she appears in oh-so-dated glam rock outfits, designed by Donnie Williams.

Looking to be in her early 20s, pencil-thin, angel-faced Hali Greenhouse has been working her way through a series of noticeable supporting roles. She was one of Cinderella’s unusually gorgeous ugly stepsisters in last year’s Into the Woods. Greenhouse plays Sophie, the daughter who wants to have her real father — one of three possibilities — attend her wedding on an unnamed Greek island.

Greenhouse sets the tone for the production with the emotiveness of her first two numbers, the yearning “I Have a Dream” and the celebratory “Honey, Honey” with sidekicks Ali (Martikah Williams) and Lisa (Chelsea Lembo). Dramatically, Greenhouse is earnest and convincing, as if the dialogue had been written by Tennessee Williams.

Unlike the plot of a conventional musical, Mamma Mia! has 12 characters with speaking and singing roles, partially as a way to accommodate all the ABBA numbers that cannot be assigned to the principals. Having the most fun are Donna’s gal-pals Tanya and Rosie, who performed with her before Sophie was conceived. Their reunion in now-dated laughable costumes, along with the three potential fathers, is the premise of the familiar photo that often represents the show, either on stage or screen.

The taller pal is wise-cracking Tanya (Stephanie Straub), the Christine Baranski part in the movie. After giving reliable, second-banana support in several numbers, including the most celebrated “Dancing Queen,” she takes a star turn with the naughty “Does Your Mother Know?” while flirting with one of the younger generation guys, Pepper (T.J. Cravens). According to her program note, Straub has just ended a 17-year hiatus from performance and appears to have been building up energy for this return. Mark her appearance here as a “discovery.”

Along with Tanya is the less-aggressive Rosie (Shannon Tompkins), who actually appears at the head of the trio in the first iteration of “Dancing Queen.” The winner of multiple Syracuse New Times Syracuse Area Live Theater (SALT) awards, Tompkins is one of the best-known performers in town. Recently she has labored to create characters far from her native persona, like the sulfurously angry daughter in August, Osage County. Here she unabashedly plays a coquettish sweetie, as she dominates the show-stopping duet “Take a Chance on Me” with travel writer Bill (Garrett Robinson), the wittiest of the potential fathers. (Alas, Tompkins suffered an injury last Sunday and is unable to continue in the role; Krystal Scott Wadsworth will play Rosie for the rest of the run.)

Considering the other possible dads, company veteran Robert G. Searle’s excellent tubes aid his Sam character in the second-act solo, “Knowing Me, Knowing You.” And Matt Green, who has sung with Syracuse Opera, shines just as brightly as Harry during his duet with Donna, “Our Last Summer.”

Mamma Mia! will be favorably compared with Central New York Playhouse’s biggest hits since moving to Shoppingtown seven years ago, Spamalot (2013) and Chicago (2017), and may exceed both of them.