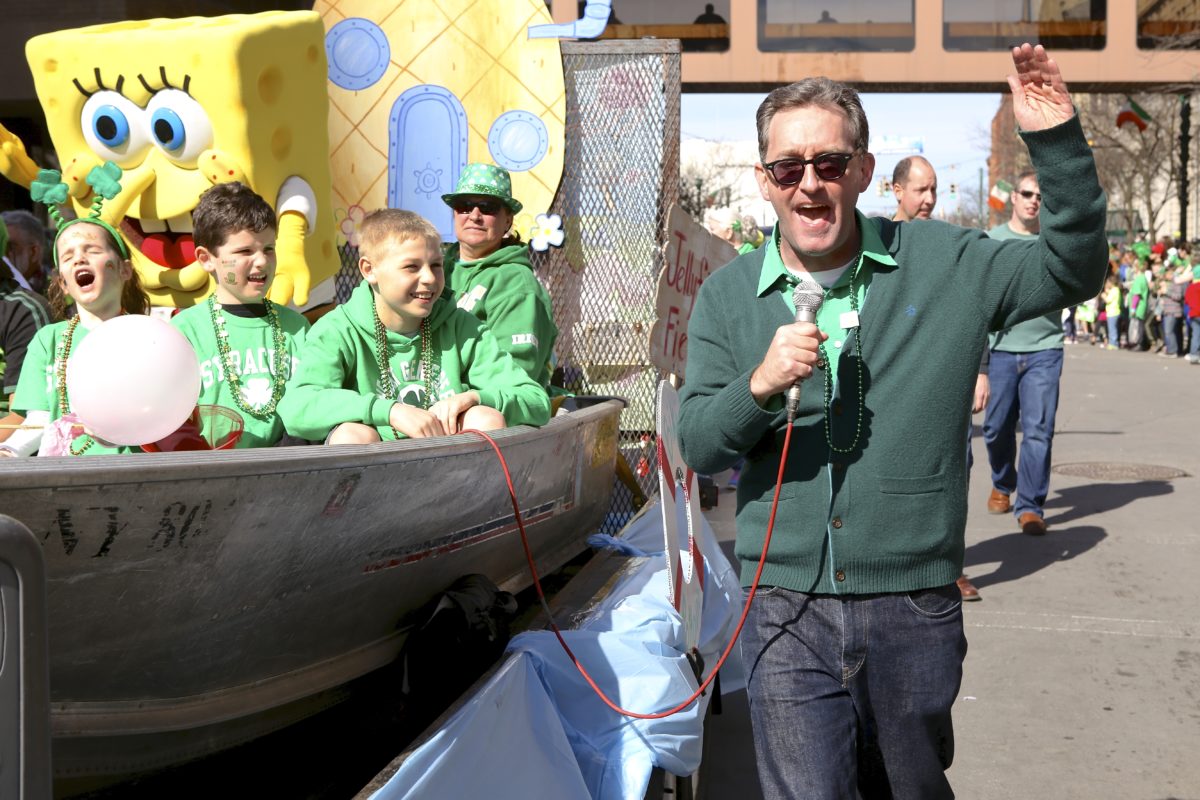 Cable’s Nickelodeon channel will celebrate 20 years of its flagship cartoon series SpongeBob SquarePants with an hour-long special slated for July 12. And cartoon voice specialist Tom Kenny, who has supplied the character’s childlike sound for two decades, is pretty excited about it.

SpongeBob’s Big Birthday Blowout features a live-action segment in which the animated characters meet their human voiceover partners, with Kenny working on the grill at the Trusty Slab restaurant. More about that later.

But first, Kenny extended his sympathies regarding the passing of the Syracuse New Times after its 50-year run. “I know the alternative weeklies are struggling big time,” Kenny noted. “LA Weekly is much smaller in terms of its format and page count than it was. I picked one up yesterday and I said, ‘This feels more like a brochure; it doesn’t feel like a newspaper anymore.’”

Kenny, 57, was certainly a longtime SNT reader: An Idle Chatter item in the Dec. 3, 1978, issue of the Syracuse New Times asked local would-be comedians to call Barry “Bear” Crimmins to perform during comedy nights at Under the Stone, located beneath the Old Stone Mill in Skaneateles. which lured then-Bishop Grimes High School student cutups Bobcat Goldthwait and Kenny to enlist in the comical cause. “My 16-year-old self meeting Barry Crimmins probably changed the course of my whole life,” Kenny commented last year.

Kenny’s life was also considerably changed by his association with Stephen Hillenburg, the series creator of SpongeBob SquarePants. Hillenburg passed away last Thanksgiving from complications with amyotrophic lateral sclerosis (ALS), so the birthday episode is part of an ongoing salute to the creator’s legacy. And that tribute will continue with the big-screen release of The SpongeBob Movie: It’s a Wonderful Sponge, slated to reach multiplexes on May 22, 2020.

Tell me about the upcoming birthday show.

After 20 years of voicing this character that’s still in production and still doing new episodes– over one-third of my life has been voicing SpongeBob– when you do the math it’s pretty surprising because you don’t notice time is passing that much because you’re still having this job that’s multi-fun.

Keeping yourself afloat as a freelance guy in show business is always a bit of a challenge, so we did this big birthday special hot on the heels of Stephen Hillenburg passing away last Thanksgiving. And it’s definitely a lot of sweet to go with the bitter because the captain is not at the helm anymore. And that’s strange, it’s hard, so were celebrating with a big smile on our faces.

It’s a good episode, with a little meta sequence where the characters spy on their live-action voiceover counterparts. They come up above the water and happen upon a diner that’s very much like the Krusty Krab, except it’s people instead of fish, and every character has his human simulacrum. And there’s a spazzy, four-eyed frycook that looks like Tom Kenny and he’s flipping burgers and SpongeBob is smitten with his technique, so it’s really fun and weird.

The episode also has good celebrity cameos such as David Hasselhoff for the first time since The SpongeBob SquarePants Movie (2004). He and I spent a day on the beach together clowning around, with me in full Patchy the Pirate regalia riding a tricycle over his foot. Hasselhoff is always either coming back from a triumphant gig in Germany or on his way to a triumphant gig in Germany where he is a rock’n’roll god. He’s totally got that William Shatner thing where he’s 100 percent aware of who he is and what his persona is, and he’s just workin’ it. He is ultra-super-comfortable in his own skin in a way that I completely envy. 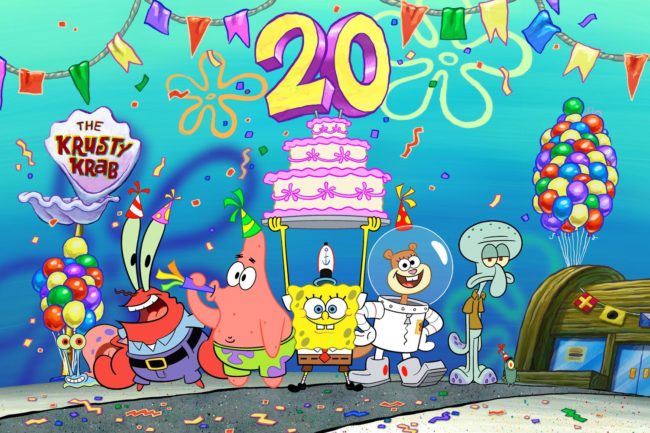 How is the movie progressing?

We’ve been recording sessions on it and those things always move slower than the breakneck pace of the TV shows, and you record for much smaller increments for much longer periods of the calendar, so it’s eking along. We’re doing that animated feature thing where you record a page and a half at a time, whereas I’m used to knocking out an 11-minute episode in a four-hour session. And I’ve been the voice director for the last few seasons, so I’m the guy that’s gotta crack the whip for these sessions.

Can you recall the first cartoon voice imitation you did as a youth?

You know, I really didn’t do too much of that. I liked the voices but I wasn’t that guy who worked on them and dazzled people with it; that wasn’t my thing. I wish I had done more like that because you can do really good for yourself when you inherit those franchise characters: “I should have worked more on my Tasmanian Devil. Who knew?” I realize that (old-school cartoon voice) Daws Butler was always in my wheelhouse pretty good; I could always do a passable Elroy Jetson. And Don Messick, too; I could always do a good Boo Boo Bear.

What was it like being part of the Tony Award-winning production of SpongeBob SquarePants: The Broadway Musical?

Again, it goes back to Hillenburg, and because of him I got to be a Broadway songwriter. And just last week me and Bill Fagerbakke (voice of Patrick Star on the series) were in Monaco at the Royal Palace with Prince Albert and his two 4-year-old kids because they like SpongeBob. It was really surreal: He’s asking questions like “How long does it take you guys to record an episode?” and “What’s it like being SpongeBob?” and I’m like, “What’s it like being a prince (in a country with no taxes)?”

The reason that whole thing happened is because Hillenburg had been very involved with the Princess Grace Foundation that funds grants to artists and they were very helpful to him when he was completing his thesis film. And that’s how SpongeBob had a relationship with the Royal Family.

Because Hillenburg picked us to do these voices, he gave us all these crazy ongoing experiences. There’s a hundred things I could list of the oddball adventures and tributaries that the river takes you into. Most jobs after 20 years are like Dunder Mifflin in The Office, but there is always bizarre new wrinkles to this job that keep on coming, and every so often it hits me that this is an amazing job.

Can you recall the events of working on the SpongeBob pilot episode?

I had met Fagerbakke before on the very short-lived Dumb and Dumber Saturday-morning show that Hanna-Barbera did. When we came in to do the pilot, he didn’t 100 percent get the concept; he just thought it was a baby show for little kids, whereas I knew Hillenburg and I watched him pitch it to Nickelodeon (executives). I was amazed by how great the voice casting was for those characters, and I had a ton of fun doing it– and still do.

I had no idea how popular it would become. Now 20 years later, time has never really stopped; we never took a Luke Skywalker-Mark Hamill break. SpongeBob has always been a presence in my life; not like a Jimmy Stewart-Harvey thing where I think he’s real. But he’s always been a constant companion for 20 years, and his personality is always living inside mine, and I’m sure the other actors feel the same way about their characters.

I am SpongeBob to a certain degree in terms of life, attitude and outlook, and it amazes me that Hillenburg intuited all of that. His instincts were incredible: He had a vision and he would not be dissuaded from that vision. He left a big square-shaped footprint that I’m lucky enough to be a little part of.[snt]