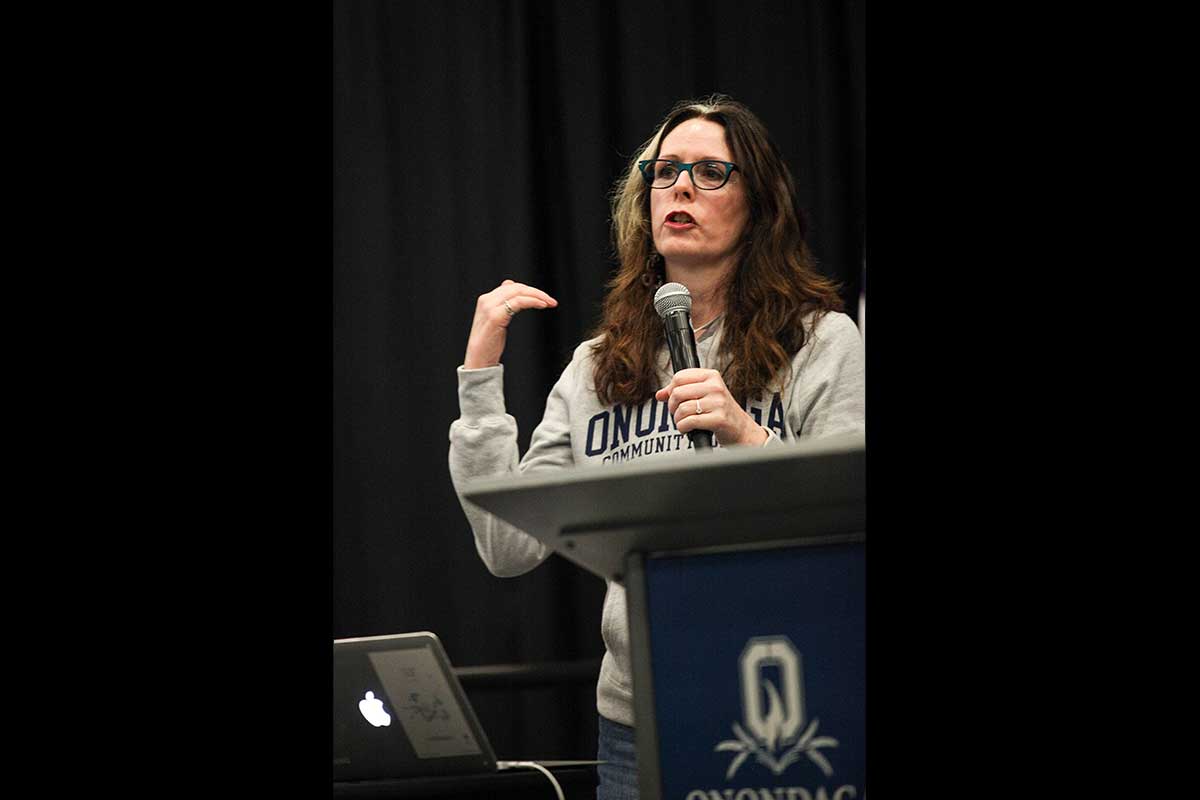 Last weekend, Laurie Halse Anderson attended the American Library Association’s annual meeting, where she spoke at the Freedom to Read Foundation’s 50th anniversary celebration. “Censorship is the child of fear and the father of ignorance” and “the poison of democracy,” she said at the Washington, D.C., event, according to tweets by the American Libraries Association Magazine. It’s a topic she’s addressed since her debut young adult novel, Speak, came out 20 years ago.

loans-cash.netSpeak tells the story of Melinda, who was raped at a party the summer before she starts high school. The book stands at No. 60 on the ALA’s Top 100 Banned/Challenged Books: 2000-2009. In 2010, a Missouri State University professor urged schools to ban the book, calling it “soft-pornography” and criticizing it for “(glorifying) drinking, cursing and premarital sex.”

Anderson’s Wintergirls (2009) also has been banned, criticized as glamorizing anorexia and self-harm. Her 2007 book Twisted has been banned because it features sex, child abuse, suicide and drug abuse.

Anderson, a 1979 Fayetteville-Manlius High School graduate and 1981 Onondaga Community College grad, has no patience for those who seek to shut off discussion about the topics relevant to young people. “Censorship has everything to do with protecting adults who don’t know how to have these conversations with kids,” she said in an interview before speaking to about 900 local middle and high school students at OCC’s SRC Arena.

Her Friday, April 26, talk followed the March 12 publication of Shout, a memoir that reflects on her own rape at age 13, which she tells through poetry. The book addresses growing up in “a house on fire,” including her father’s PTSD from his experiences serving at Dachau at the end of World War II, alcoholism and family dysfunction.

“With Speak, Anderson opened the door for more novels exploring the deeply felt and deeply personal aftermath of sexual violence,” The New York Times Book Review wrote in March. “Shout serves as both a testament to the life-altering, lifesaving impact of these types of stories — and as an urgent and brutal reminder of their ongoing necessity.”

Speak made The New York Times’ bestseller list for seven weeks and has earned critical praise. In a starred review, Booklist called it, “A captivating, powerful read about clawing your way out of trauma, reclaiming your body, and undoing lifetimes of lessons in order to use your voice as the weapon it is.”

In another starred review, School Library Journal said, “More than a gifted writer, Anderson is an advocate for anyone who feels alienated,” adding, “Her sensitive, incisive book is essential for all young people.”

Her new book emerged amid the anger and reckoning of the #MeToo movement, which started around 2006 and exploded after the 2017 sexual- abuse allegations against movie mogul Harvey Weinstein. “I’ve been waiting a long time for this movement to take place,” Anderson said. “It’s a pretty simple message: You don’t touch other people without consent. We have to talk about sex with our kids so they talk about sex with their partners.”

In a talk accompanied by family photos and memes, Anderson spoke with students from nine districts about writing, the challenges of high school and the importance of consent in sexual relationships. “Nobody who knew me when I was a kid had any hopes to do anything interesting at all,” she said. “Anybody who knew me when I was a little kid never thought that I would be a writer because I hated school. I had a hard time learning how to read.”

Once she did learn, she “turned into that kid that was reading all the time.”

“History was the one subject I paid attention to,” she said. “History is the academic subject that comes closest to our favorite pastime as human beings, which is gossip. ‘He did what? With whom? Did he get caught? Then what happened?’”

She was born in Potsdam; her family moved to Syracuse when she was in first grade. Her father, a United Methodist minister, served as a chaplain at Syracuse University’s Hendricks Chapel. Anderson earned a bachelor’s degree from Georgetown University.

Her OCC appearance came during an 18-city book tour. In addition to her popular YA novels, Anderson has written historical novels, a children’s series set in an animal emergency room and several children’s picture books. She recently wrote a graphic novel about Wonder Woman for DC Comics that will be published in 2020.

She sympathized with students living with someone struggling with substance abuse “Because that’s really, really hard.” A lot of teenagers “sort of take on too many burdens.”

While sharing a black-and-white photo of herself writing poetry, she matter-of-factly said, “I was sexually assaulted by a boy who I thought was my friend.” She feared her father “would hunt the boy down. I didn’t tell anybody for 23 years.”

Reading “was the source of sanctuary for me,” she said. “I had a lot to be escaping from. The depression and the PTSD that I developed after my attack is something that dogged me for years.”

Her books address “who I was when I was a kid and a teenager,” she said. “One of the things I can remember is our inability to talk about things that were hard. I know that you guys are facing so many hard things because, frankly, this culture does not respect teenagers.”

Her books take on “dark topics” in an attempt to bring readers to the light, she said.

“I apologize on behalf of all the idiot adults in the world that we’re handing this world to you,” she said. “But you guys give me a lot of confidence that we’re finally going to be able to get this right. What I know is that books are a really good way to start those conversations.”