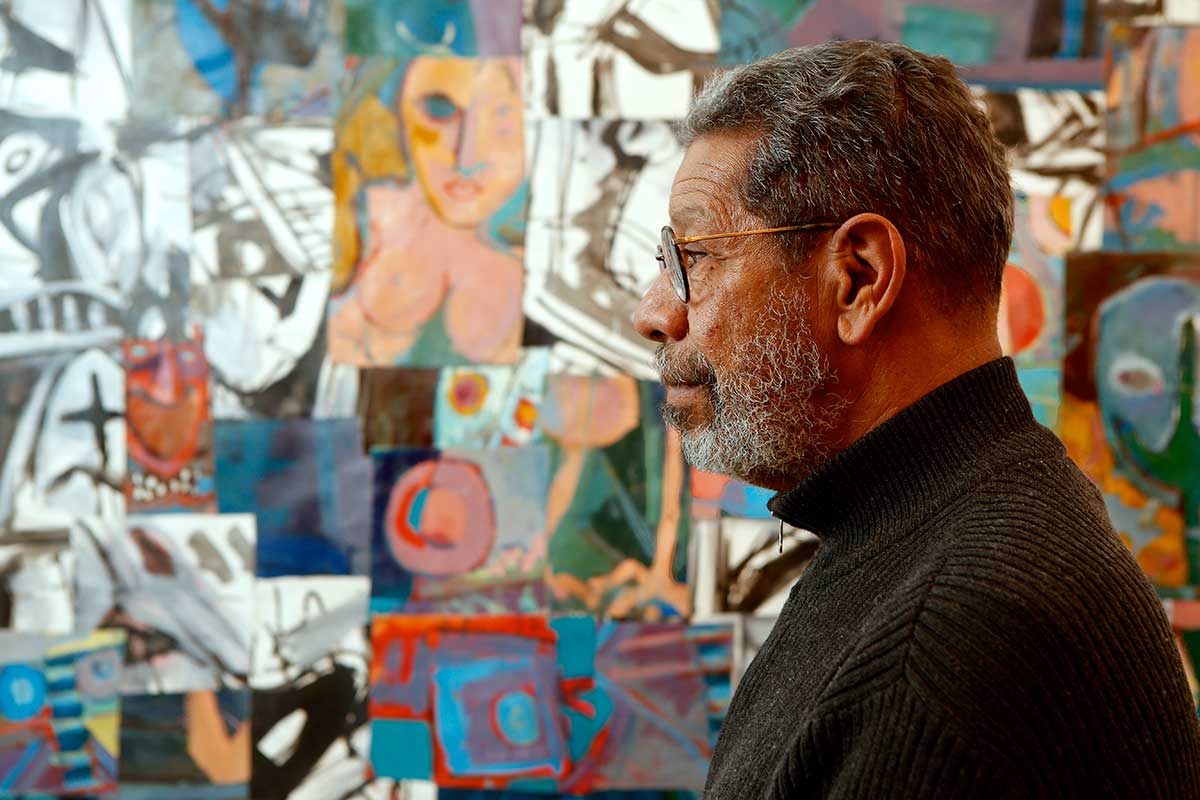 The large exhibition Juan Cruz: A Retrospective occupies two galleries in the Everson Museum of Art, fully exploring an artistic career that’s roughly 50 years old. The show documents Cruz’s multiple creative roles: painter, sculptor and muralist, with a timeline running from a drawing of abolitionist Harriet Tubman, completed in 1974, to a painting finished last year. And it details Cruz’s evolution as an artist.

вэббанкирMost importantly, the retrospective addresses the complexity of the artworks. They are morose and exuberant, reflective and free-flowing. They reference the human condition, the impact of colonization on the Caribbean region, and Cruz’s own experiences.

Cruz was born in Puerto Rico in 1941, then moved with his family to New York City at age 5. He has lived on Syracuse’s Near West Side for most of the last four decades.

The show displays a variety of work including wood sculptures, portraits and ink-on-paper pieces, but its primary energy comes from Cruz’s signature paintings. They merge bold colors, a predominantly abstract style, and a willingness to challenge viewers.

An oil, “Nothing Changes (Nada Cambia),” refers to conformity, as it evokes a crowd. Faint figures are packed together; no one speaks out, no one communicates.

For “In the Kingdom I (El Reino # 1),” there’s a sense of disconnection. Legs and any body parts are split off from any human being. This oil painting was done in vivid red color.

A third painting, “Black Wings (Alas Negras),” has multiple elements: red, orange and black colors, partial views of faces, a tiny image of a pyramid from Mexico, a sense that the painting is set in a chamber. It’s a site of violent conflict, perhaps an interrogation.

And “The Spirits of My Night (Los Espiritus de la Noche)” stands out as one of the best pieces in the exhibition. Done in green and white colors, it features a dog, masks, eyes and other elements, creating an illusion that they are floating on canvas.

“Stains (Manchas)” is full of orange and green patterns that run up, down and into each other. It alludes to violence in the form of a massacre or battle. This is one of several works in which Cruz has discussed the fate of the Taino, an indigenous people that lived on Puerto Rico, Cuba and other islands. During colonization, they were decimated by disease, starvation and slavery.

As important as such pieces are within the exhibit’s framework, they don’t dominate. There’s also the large painting “Let’s Celebrate (Celebremos),” whose gold colors communicate joy.

In addition, an oil pastel on wove strikes a different note. It depicts a Venus flytrap in lush colors, conveying a scene in a tropical climate.

Look for an untitled painting portraying a solitary individual set against a searing-orange background. He’s alone, alienated, out of time. “Games People Play (Los Juegitos Comeleones),” a collage, demonstrates how the artist sometimes recycles his own work. Using scissors, he cut up several paintings and then reassembled the pieces.

While most of the show takes place in the upstairs galleries, there’s also a mural on a lower level. Created by Cruz and members of the Everson Teen Arts Council, it’s both worthy in itself and as a connector to the artist’s interest in community-art projects. Over the years, he’s painted several murals on the Near West Side and instructed teenagers and young children. For example, he’s taught mask-making and other forms of art to children at the Las Casita Cultural Center.

That’s one more aspect of a substantial career. To expand the conversation about Cruz’s artworks, the Everson has scheduled a gallery walk with Cruz on Thursday, June 27, 6:30 p.m.