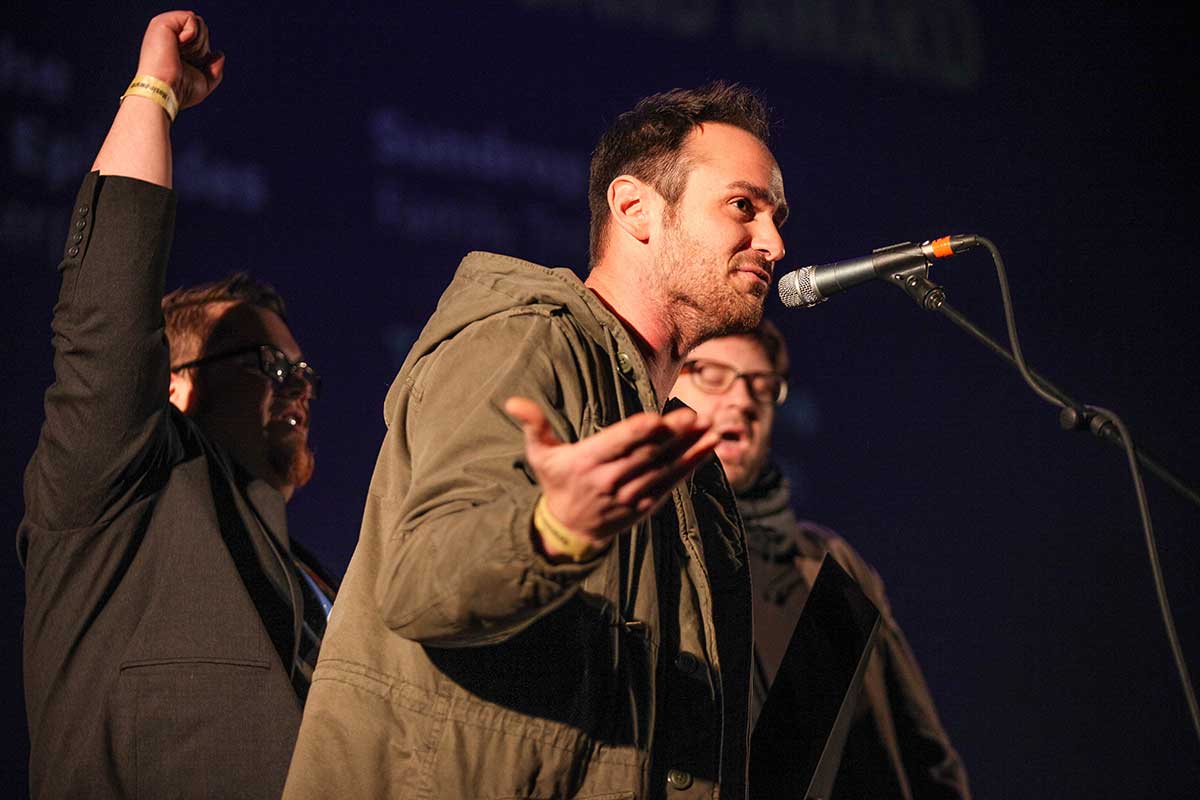 Each of the three compact discs reviewed here were deservedly nominated for 2019 Syracuse Area Music Awards (Sammys) in three different categories. Only one took home a trophy this year, attesting to the overall high quality of Sammys’ submissions.

Scan the names of the top 20 finalists every year at Nashville’s Grand Master Fiddler Championship and you’ll rarely see a contestant from our own Empire State. Most of those fiery fiddlers hail from Kentucky, Missouri, North Carolina, Texas, Tennessee and West Virginia.

Regardless, Central New York is home to a downright dynamic fiddler working in the Irish tradition, and Golden Rule shows him to be a master in his own right. He is fully capable of lighting a fire under the best step-dancers in the world with all manner of arpeggios, rolls, trebles, cuts and bow slurs.

Having honed his chops playing bluegrass for the Delaney Brothers, Irish rock with Ceili Rain and Irish pub tunes with the Flyin’ Column, Joe Davoli now stands at the peak of his game. He may not yet be an official Grand Master, but in 2017 he was inducted into the North American Fiddlers’ Hall of Fame. On Golden Rule, his second solo disc following 2009’s Game Plan, Davoli channels the Emerald Isle from O’Carolan to “Danny Boy,” from jigs to reels, from waltzes to planxties.

Along the way, Diamond Joe puts aside the violin to pick mandolin and tenor banjo and bow a little chin cello. He even delivers a couple sparkling vocals on “Spread a Little Love Around,” embellished by his own whistling, and “Still Got a Crush on You” by Nashville cats Paul Overstreet and Dean Dillon.

While most of the CD’s 12 tracks were cut at Bradley Brook Studios in Eaton, those two sung songs were waxed at Syracuse’s HooliHut and engineered by Ceili Rain bandleader Bob Halligan Jr., who pumps up both tunes with his electric bass lines and backing vocals. In fact, Halligan’s all over the Davoli disc!

To make Golden Rule truly rule, the fiddler collaborated with a half-dozen of the top musicians in town. Halligan co-produced along with Davoli, played plenty of tasty piano and electric bass and sang his heart out as usual. First-call drummer Josh Dekaney, who plays an array of percussion from Roland pad to rub board, propels the opening medley of jigs, while multi-instrumentalist Nick Piccininni picks a lovely dobro to kick off “Sourgrass and Granite” by Toronto tunesmith Brian Pickell.

Two top tunes from separate ethnic backgrounds, “How Great Thou Art” and “Itzikel,” round out Golden Rule, and both benefit from Morton’s big-bottom sensitivity. “How Great Thou Art” is based on a traditional Swedish melody, while “Itzikel” is a klezmer number although Davoli transforms it into a hornpipe. The dance tune was introduced to the Irish tradition by British fiddler Kevin Burke, now living in Oregon. Morton opens “Itzikel” with a slyly dissonant bass intro, and the Russian freilach turns into a “happy tune” indeed due to Davoli’s arrangement and Mitchell’s fluent Irish flute.

The beloved standard, “Danny Boy,” appears here as “Derry Aire,” one of the names of the ancient Irish melody on which the popular song was based. Davoli’s instrumental version is aptly reverent and deliciously unrushed as he tremolo-picks his mandolin over Halligan’s complementary piano comping.

Golden Rule was nominated for a 2019 Sammy in the Americana category. To contact Joe Davoli, visit joedavoli.com.

If the composer credits on Into the Blue are any indication, they should consider changing the group’s name to the Spencer-Gibson Band. As a singer, Mark Gibson knows how to structure songs, so his compositional skills lay an exceptionally strong foundation for the band on this steel-edged, swingin’ blues set. Gibson’s songs include the catchy opener “Closer to the Bone,” along with “(I’m Doin’) Ah-right,” “Callin’ to Me” and “Fine, Fine Woman.”

Guitarist Rockin’ Ron Spencer and Gibson, his bald-headed blues belter, co-wrote “Addicted to You,” “So Wrong for Each Other” and “Cold Outside,” my nomination for the 2020 Syracuse Winterfest theme song. Gibson also collaborated with bassist Bob Purdy on “It’s Time,” and Bob’s booming bass authoritatively rocks that timely tune.

Into the Blue was nominated for a 2019 Sammy in the Blues category. The Ron Spencer Band will perform Friday, June 21, at CC’s on the Green in Elbridge and July 22 at Johnson Park in Liverpool. Visit ronspencerband.com for information.

The disc’s standout number, “That Ol’ Slimmerin’ Sauce,” is three minutes and 18 seconds of instrumental joy as fiddle, keyboard and cascading guitar all improvise on a riveting repeated riff.

“Human Family” is built on reggae-like rhythms as Fisher’s scratchy chording and reverbed vocal coalesce over Walts’ relentless, pulsating bassline. With its wild wah-wah intro, “Mister Blister” is an all-out psychedelic jam, an uplifting instrumental with a harmonious, high-powered bridge all played over an incessantly chugging rhythm.

Fisher’s vocal on “Bee’s Honey” is somewhat obscured, but the stoptime arrangement catches the ear, as does Fisher’s single-note flurry on lead guitar. Buzzing bees are suggested by a clever array of electronics including a tube plugin on the voice, Dubaneiwicz’s flutes that sound whirling bee-ish and the guitar embellished with phase-shifter, overdrive, reverb and a Leslie cabinet plugin.

The disc climaxes with “A Little Dab Will Do Ya,” a slow, dreamy and loud instrumental in which Fisher’s guitar plays a lively call-and-response pattern over Walts’ buzzing bass bottom.