So much of music comes from personal experience. The messages artists share are those grown from their own life lessons, victories and failures. But sometimes an album comes along that does more than that and shakes the very foundations for which everything else stands. Jazz trombonist, songwriter and vocalist Melissa Gardiner’s Empowered is that kind of album.

Songs and interludes don’t just scrape the surface of conversations about domestic abuse, sexism and the expectations of being a female: They slap them in the face. Gardiner doesn’t tiptoe around anything. She is anxious to dive further into the meanings behind the songs that already are screaming their intentions. “The album is my story,” she admits.

Although Central New Yorkers know Gardiner as a powerhouse talent who has shared stages with artists like Aretha Franklin and Vulfpeck, far fewer know how she ascended to those stages and how she returned home to Syracuse.

Gardiner has a master’s degree in jazz performance from the Juilliard School and graduated with a bachelor’s degree from the University of Michigan. She is the trombone instructor at Le Moyne College and Cornell University and has won several awards, including the Lifetime Educator of the Year Hall of Fame Award from the 2019 Syracuse Area Music Awards (Sammys). She leads several award-winning bands and has also initiated several arts programs in her community, including a longstanding weekly jazz jam, neighborhood drum circles, the Unity Street Band, and the SALTspace performing arts center.

But her road from Juilliard grad to Empowered was more of a fight than a stroll. “The intro track ‘911’ is the actual 911 call from an incident in New York City,” she says. “My ex strangled me. I thought I was going to die.”

Next comes “Rain Reprise,” a rerecorded version of a song from her 2011 debut album Transitions. “I wanted to redo the song,” she explains. “It addresses the story of what happened, but in a metaphorical way. The rain doesn’t stop until you go away, until you stop trying to change the person and leave.”

“Slowly” is a smooth song about recovery and moving slowly forward one step at a time. “It’s about feeling invisible, where people are looking at you, but not seeing you. They’re only seeing your physical body.”

Part of the reason Gardiner moved back to Syracuse was to be closer to her family when she gave birth to her son Julien. The song “Bump” pays tribute to the baby bump she had when she was pregnant, marking the significant changes she had to make in her life, including the move and the need to give up drinking when she became pregnant. “That was the beginning of the rest of my story,” she says.

Many songs on the album feature special guests including notable female jazz musicians Ingrid Jensen and Tia Fuller. “It’s a dream come true,” Gardiner says. “I feel honored to have them as part of my story. They’ve been incredibly supportive of me.”

While Jensen and Fuller provide their musical talents on trumpet and saxophone, respectively, they also lend their voices during various interludes. “Smile” and “We’ve Been Conditioned” directly capture honest discussions about being the only person on stage told to smile. Or wondering why women are so willing to put another’s comfort and needs before their own. Is it personality? Or is it conditioning?

“Mask” is about first impressions and the encouragement women get to keep their thoughts and feelings hidden, while “Brass Ceiling” talks about more than the obvious reference to breaking the glass ceiling. Gardiner initially thought the phrase was a clever play on words, yet it took on more significance after her experience auditioning for a military jazz band.

“Brass ceiling also refers to a ceiling in the military and police,” she says. “I got really far in the audition process for a top jazz band in the military. I wanted it because there are very few professional opportunities in jazz big bands. It was full time with benefits and usually you can’t get into those bands without it being about who you know. It limits your opportunities, especially if you’re marginalized. I wanted a stable performing career as a single mom. But I was told I couldn’t do it because I had sole custody of my child. I had to give up custody or get married. I was shocked that it was a barrier.” 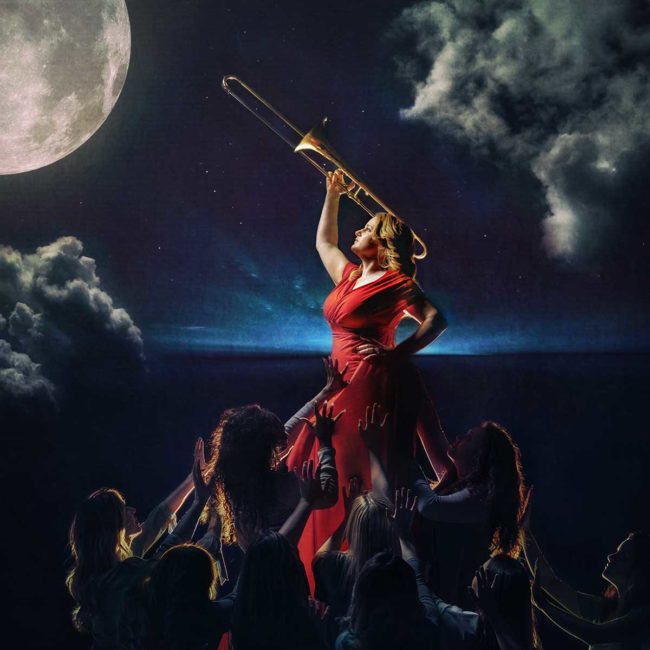 And that’s only one story. Gardiner also opened up about her dream of joining the Jazz at Lincoln Center Orchestra. But when she asked members why there were no females in the band, they said it would be too distracting. “It messes with our vibe,” they told her.

In another instance, Gardiner was trying to network with a musician she respected and he invited her to talk professionally over coffee. But after no response to the original invitation, Gardiner found out his fiancée had banned him from speaking to her — because she was a female and felt the interaction, although professional, was inappropriate.

“I’m sick of those responses,” she says. “Now I have a point to prove. I’m a fighter. This is not OK. I’m still sharing these stories today and hoping things are shifting. Women are coming forward and they’re empowering me to come forward.”

These themes and issues will come to the forefront during Gardiner’s CD release party on Friday, June 21, at SALTspace, 103 Wyoming St. The event begins with a VIP cocktail reception at 8 p.m. followed by a 9 p.m. show. Tickets are $20 each or $50 for VIP and available through Eventbrite. VIP tables are also available for $300 and seat up to eight people. Those getting a VIP table can write the check directly to the Near Westside Initiative and donate to Gardiner’s SALTspace scholarship fund to support low-income students for performing arts programs being offered at the venue.

Several participants on the album will perform at the party, including Byron Cage (drums), Anthony Saturno (guitar), Brieanna Hunt (vocals), Andrew Carroll (organ) and more. Additional performers will include Nick Fields (trumpet) and Melody Rose (vocals), while Jeremy Johnston, who recorded much of the album with his mobile studio, will engineer the show.

Empowered ends with two important tracks. One is titled “Home,” which is a reference to Syracuse and Julien. “I didn’t find my center, my peace, my support system until I moved back to Syracuse,” Gardiner says. “He enabled me to be who I am today. Empowered by women in music, by men. All the voices and people around me.” T

hat idea also comes through in the powerful album art directed by photographer Robyn Stockdale. The images depict Gardiner climbing a ladder with other women helping her up.

“It feels good to finally set roots,” Gardiner says. “I’ve never lived in one place so long (as eight years in Syracuse). People tell musicians you need to go to New York City or LA to do anything. I’m glad I went, but I’m happy I get to do what I do from Syracuse. Living in New York was just a step.”

The final track is an intimate moment between Gardiner and Julien as they sing to each other and exchange “I love yous,” which feels like a comforting close to an album that stirs up so many questions.

“When I was attacked by my ex, people just threw it under the rug,” Gardiner says. “People told me to drop the charges. That boys’ club culture. It’s something we need to address as a society. I want people to wake up. We need to stop hiding the bad things and face them head on so people can get the help to change. So victims can get help. I want people to connect and not feel alone. These are the main things that have stuck with me and I’m ready to scream them to the world now.”