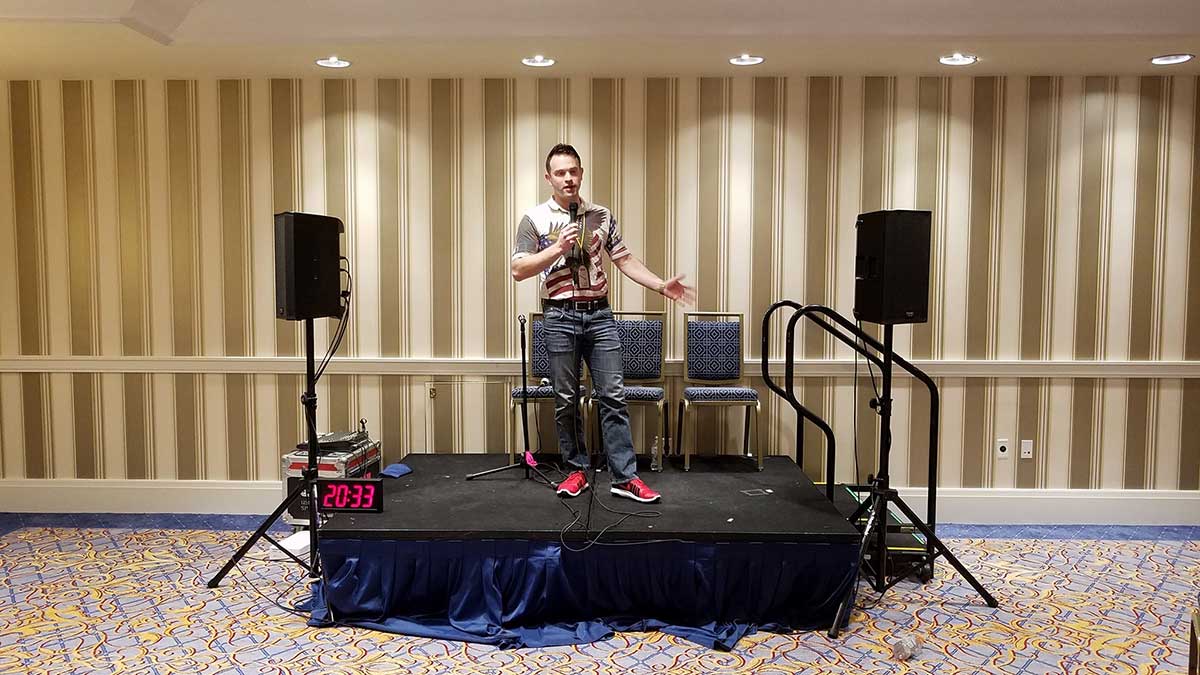 Since he was 15, Christopher Getman dreamed of composing music for the video games that he loved. In 2018 he achieved that goal by creating the soundtrack for the game MazeQuest 2. “I had an itch,” he says. “I wanted to get composing video game music under my belt.”

Getting there for Getman wasn’t easy, however. He obtained his bachelor’s degree in music from SUNY Purchase in 2001, then began writing scores for low-budget films in Los Angeles, which mostly consisted of remixing other composers’ work.

“The editors would fall in love with a(n outside) track and say, ‘Write something like this!’” Getman explains. “It took all the joy out of it.”

So Getman moved back to Central New York and started a career in web development; he currently works as senior manager-digital innovation for EarQ. Yet his interest in video game music never subsided, and his need to work within the genre has been a constant in his life.

“If I’m not writing, I feel like something’s empty,” he says. For that reason, he became known as Mazedude in the online video game music world and began remixing other composers’ work. In 2017 he released a five-year passion project called American Pixels, which featured remixed video game music from American composers. The album won a Syracuse Area Music Award (Sammy) for Best Electronica in 2018, while also gaining significant online attention.

In early 2018, Getman reached out to his contacts in the gaming world and eventually connected with OMB Media, which was creating the game MazeQuest 2. Right off the bat, Getman felt a connection with the name: MazeQuest meets Mazedude.

The creators had an original MazeQuest game but were looking for a new composer, and Getman fit the bill. The RPG (role-playing game) needed a score that they had already mapped out, which gave Getman descriptions of how the music should make the player feel.

“It was right up my alley,” he says. “It was a game with flexibility where I could use orchestral sounds, but weave in other sounds and create a fusion-based genre.”

He drafted ideas for themes in 8-bit and later refined the songs. Both versions can now be found on the complete 50-track album, which also features bonus tracks of unused material.

From February through May, Getman worked on the project during mornings, weekends and nights between obligations with work and family, while also communicating with game developers in California and Guatemala. The resulting tracks feature instrumental sounds spanning sitar, Tibetan bells, Alpen horn, apache shaker, steel drums, hammered dulcimer and more.

“I got to use ethnic sounds, and it was so much fun,” Getman says. “It was such an interesting palate to blend together.”

Part of the reasoning for the variety was that most songs used for video games are only one to two minutes long and set on a loop. “It’s something you’re going to hear over and over and over again,” Getman says. “It’s impressive and challenging to develop something that you won’t get tired of. It locks me in a box so that I can’t develop something for four to five minutes, but doing so would also take much longer.

Getman was also one of the testers for the game, which was released online in October. “Game developers often show games in progress for fans to play and then give feedback,” he says. “But often they don’t respond well to fan feedback. I give big kudos to this company for making sure fans and players were happy. It’s polished and they involved the community throughout the process.”

Getman has other musical plans in the hopper, but he’s not involved with video game composing at the moment, although he’d be open to discussions about potential projects.

And for those who want to follow in his footsteps, Getman offers some simple advice. “Just keep trying and reaching out,” he says. “There are lots of Facebook groups for indie game developers. Also, develop a portfolio to show off your work. I’ve seen people draft soundtracks to games that didn’t exist just to show what they could do. You can show that you have skills to get their attention.”

MazeQuest 2 is currently available on various online platforms including iTunes, while the album is available in iTunes, Amazon and Spotify. For information, visit mazedude.com.