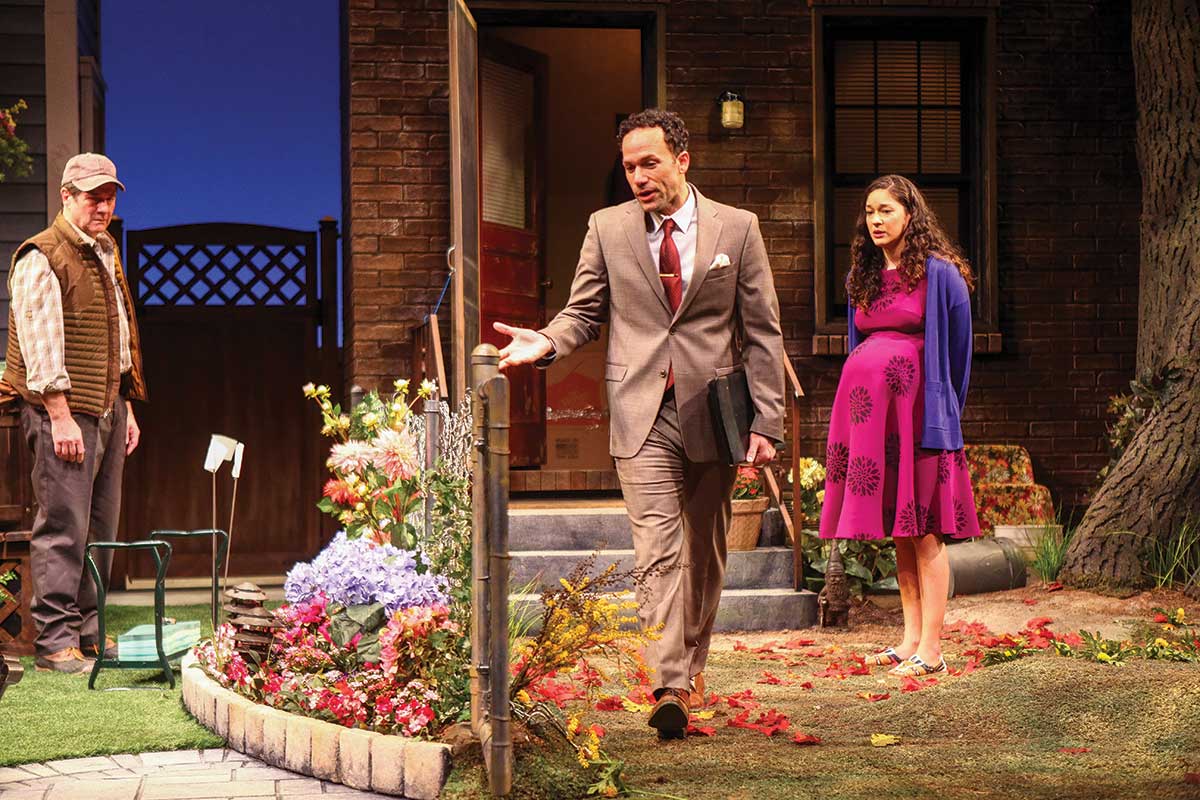 More than in most productions, Shoko Kambara’s articulate set design contributes mightily to the action in Native Gardens, running through March 3 at Syracuse Stage. Playwright Karen Zacarías anticipated that many theaters no longer raise curtains to begin the show, and that audiences would be sizing up the set while looking for a seat and zipping through the program.

Kambara has us see on the left a brightly restored façade behind an obsessively manicured garden filled with flowering plants in full bloom. Maybe a little conservative for Martha Stewart, but she would approve. As our eyes go right we see a grimy brick wall behind a backyard of weeds and dying grass. As Kambara says in a witty program note, no stage catalog sells stuff like that: You have to make it on the spot.

We’re in Washington, D.C., a city of cosmopolitan influx where your neighbor might actually wield power of some kind. The first characters we meet live in the weedy backyard, and they’re Hispanic: Pablo Del Valle (Erick González) and his very pregnant wife Tania (Monica Rae Summers González). No, these are not the invaders President Trump has been cautioning against. Even though Pablo is indeed an immigrant, he is a lawyer who has just joined a powerful law firm, and Tania speaks of finishing her dissertation.

In the spiffy yard live the WASPy Butleys. Frank (Paul DeBoy) is a bureaucrat of some kind who actually tends the garden, and Virginia (Anne-Marie Cusson) works for defense contractor Lockheed Martin.

The first act has playwright Zacarías revealing that most of the signals she has been sending, primed to play on common prejudices, are red herrings. Tania, although of an underprivileged background, was born in New Mexico and the only Spanish she knows are curses. Pablo is Chilean, from possibly the whitest of all Latin countries, and grew up in affluence. Even the seemingly patrician Virginia turns out to have been born blue-collar Polish in Buffalo.

Kambara’s set, however, implies more tensions than ethnicity and class. The Del Valle place may look down-market because it had recently been a rental property, but Tania wants the backyard to look the way it is, with an aged oak sprinkling gobs of acorns. In this context she introduces the term “native garden”; the yard is “native” because it focuses on flora from the region, roughly Chesapeake Bay, and it encourages benign insects. Linking to the immigration theme, Tania disparages the Butleys’ garden because it is filled with vegetation from distant places and encouraged to bloom with harsh chemical fertilizers and insecticides.

Three plot devices rev up the tension. The Butley garden has been a prize-winner, and the inspection for the competition is imminent. Pablo has invited most of the office for dinner the following Saturday. And Pablo has determined that the designation of the property line is in error, and the fence the Butleys erected must come out. Great swaths of the Butley blossoms are flush against the fence.

Karen Zacarías, who was playwright in residence at Washington’s Area Stage, where Native Gardens appeared in 2017, knows both Washington geography and these characters very well. Although born in Mexico, she is the granddaughter of leading pre-World War II movie director Miguel Zacarias, and she received a degree in creative writing from Stanford. She was recently named “Washingtonian of the Year” and can socialize with the power elite.

New York–based director Melissa Crespo, who has helmed other Zacarías projects as well as Hispanic items (Pedro Pan), does not encourage the same confidence. We sense trouble coming in her staging of Erick González’s Pablo, who Tania tells us was born with the biggest imaginable silver spoon in his mouth. He’s just been hired at a selective, powerhouse law firm, with no insinuations about affirmative action. But with the animated body language and outright mugging Crespo asks of his performance, he could be Ricky Ricardo without the accent.

The Butleys are also nudged toward the island of lost sitcoms. Zacarías created them on a groundswell of sympathy and awarded them more than their share of sparkling gags. Paul DeBoy displays the right timing, as when his Frank laments about what was once revered that has now gone out of fashion, like “white rice (two-beat pause), Cat Stevens.” In the high comedy realm of Philip Barry, Garson Kanin and Anthony Shaffer, to which Zacarías appears to have aspired, one can deliver comic lines without becoming a comic type. The Butleys may have displayed some wince-making faux pas, but they are dignified creatures of status and should break against type when saying something droll.

Meanwhile, Monica Rae Summers González’s Tania, a character who unmistakably speaks for the playwright, seems always contained, even when popping off in anger. She has many passionate lines but barely a gag.

Dramatic action turns away from perceptions of class and ethnicity and flares up over territory. Will Frank’s garden be ready for the inspection? Can the law partners come for the afternoon? When will the pregnant Tania’s water break? Somehow the frequent laughter of the earlier action begins to peter out at what should be the maximum tension.

Notable in this production is the original music by Elisheba Ittoop, a sound designer and composer with golden national credits, including the Kennedy Center, Steppenwolf Theatre and the Oregon Shakespeare Festival. There are no echoes of Latin America or the steely Washington of House of Cards but instead witty heavy beats evocative of comic conflict.