You might not know it, but if you live in Central New York, Scott Allyn may have changed your life.

The curly-headed scion of the Skaneateles Welch-Allyn medical-equipment empire may have treated your family during his two decades as a family physician. If not, you might have attended stage shows and concerts at the Redhouse, the arts center which he and his then-wife, actress Laura Austin, established in 2004 on the outskirts of Armory Square.

“We just thought that downtown Syracuse needed a good theater,” he says now. He continues to serve on the Redhouse’s board of directors, although his ex-wife was let go from her position as artistic director last year shortly after the facility moved into its new location on South Salina Street.

And if you haven’t taken in the Redhouse’s entertainment schedule, maybe you have heard music produced at SubCat Studios, which was born 18 years ago in the basement of Allyn’s medical practice.

“That was the first time I was able to record my music on something other than a cassette tape,” Allyn quipped. “But it wasn’t easy because it flooded so often.”

That DIY operation has blossomed into a world-class recording studio owned by drummer-engineer Ron Keck. It’s now located at 219 S. West St., in the same building where the Redhouse was founded.

In fact, Doyle — Central New York’s most versatile and experienced record producer — had collaborated with Allyn at SubCat for a couple decades. They waxed two albums of Allyn’s songs as performed by Laura Austin, I could be anyone (circa 2000) and BitterSweetHeart (2008). 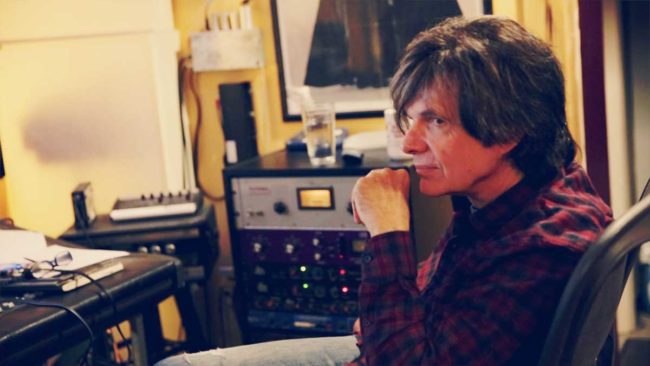 Mark Doyle during the making of “Forgottensong.” (Provided photo)

“Before Scott and Laura and their kids moved to England for a year, we had worked on seven more songs in hopes that we would make a third album when they returned,” Doyle recalled. The unstated plan called for Allyn to clear his mind abroad and continue writing so that the record could be completed when the family returned.

“Instead a very odd thing happened,” Doyle said. “He totally lost his connection to music.”

Fast-forward to 2016: “Out of the blue I heard from Scott who told me that, sadly, he and Laura had split up a few years before and that he was living in Barcelona,” Doyle recalled. “The welcome news was that he was writing again. He said it was like the floodgates had opened.”

Allyn had an epiphany. “I think I finally realize who I am,” he told Doyle. “I’m a songwriter.”

Doyle had been willing to travel to Spain to record the material in Barcelona and using Spanish musicians if necessary. “But Scott asked how it would work if we did it here at home,” he said. “I suggested that since the songs were so eclectic, maybe we could look at it like the Alan Parsons Project, where we could cast different singers for each of the songs. I could make demos of the arrangements based on the rough sketches he sent me and bring in musicians and singers to see how it works.”

Related: See the nominees, honorees for the 2019 Sammy Award

Starting in November 2016, Doyle, Allyn and their hired hands spent the next 14 months making masters of all 18 songs using three different studios: Doyle’s own Near Miss for most of the bass, keyboards, guitars and half the vocals; SubCat for strings, horns and grand piano; and all the rest — including mixing and mastering — at Jocko Randall’s More Sound Recording Studio.

“Scott trusted me to do all the hiring,” Doyle said. “It generated a lot of work for a lot of people. Everyone got paid, even if their parts ended up being replaced. It went on for a long time, and Scott said from the beginning that there was no budget, it just needed to be right.”

Forgottensong Vol. 1 kicks off with one of those seven original forgotten songs, “One Clear Moment,” a slow-marching rocker uplifted by an exuberant bridge and Phil Broikos’ emotive recitation. Doyle and Maureen Henesey share vocal duties on “This Is the Day that the Lord Hath Made,” where a jubilant sax solo by Joe Carello soars over drummer Frank DeFonda’s steady beat.

As Broikos croons noncommittal lyrics like “My girlfriend keeps me hanging by one loose end/ There’s no reason to pretend” on “My Girlfriend,” Josh DeKaney propels the reggae beat with Doyle on bass, Joe Davoli on violin and Mark Nanni on accordion.

“I’m Comin’ Home” spotlights Doyle’s heavily affected vocal as strings repeat an ostinato over which Davoli’s fiddle flies. DeFonda is clocklike, ticking down the seconds to the happy homecoming.

The string section soars again on “Vertigo,” an oddly structured tune mirroring the dizziness of the title ailment. Broikos’ intentionally unsteady singing completes the picture, immediately admitting, “The air is thin up here.”

Over the course of his half-century career, Mark Doyle has deservedly become well known for his inventive and exhilarating electric guitar work often showcased on instrumental-only albums such as Guitar Noir and Out of the Past. But on Forgottensong, he applies that same imaginative approach to lead vocals. 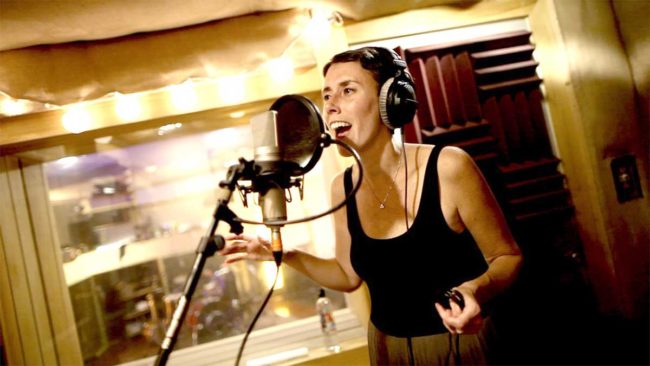 Maureen Henesey in the studio during the creation of “Forgottensong.” (Provided photo)

On “Big People” Doyle sings the blues anthem a la John Lennon or Bob Dylan, decrying the rich and powerful. Terry Quill’s guitar and harmonica support culminates in a guitar duel with Doyle before spirited gang vocals take it home. Add in Todd Shuffler’s big-bottom bass and “Big People” becomes one of the best tracks on the double disc.

On Vol. 2, Doyle belts out a few more including “American Beauty,” the memorable set-closer. It’s an easy shuffle co-written by Allyn and Doyle, who enhances the glamour with some winsome wah-wah guitar and plays all the music except DeKaney’s declarative drums.

Three more of the inspirational seven form the backbone of Vol. 2. On “Bulletproof,” Broikos sings over looped drumbeats, and the story of misspent youth fascinates as its inner-rhymed lyrics resonate: “He lives to the click-track of finding a six-pack/ And knocking them all back for something to do.” Or “Dressed like a hooker, the girl was a looker/ And no one would mistake her for a Mouseketeer.”

Lyrics are one of Allyn’s most trustworthy talents. It’s got to be a joy for a vocalist to sing lines like “They float like confetti through mayhem and beer.” “Bulletproof” also contains one of the greatest slant-rhymes ever written: “Hyundai” and “Sunday.”

“Quien Bien te Quiere to Hará Llorar” (which means “the one who loves you will make you cry”) is another slow one for Broikos. He sings “these feet of clay are fixed in tar” backed by Mo Henesey over Doyle’s sensuous string arrangements punctuated by Jeff Stockham’s forceful French horn.

“Easy to Talk that Way” finds Broikos in an insistently upbeat mood. Allyn’s song, which features Fab Cats Gary Frenay and Arty Lenin on backup vox, is Beatle-esque but bitter.

One of the newer tunes, “Eye to Eye,” may have been inspired by Allyn’s marriage breakup. It boasts an unusual instrumentation as Doyle hammers a xylophone, Jillian Honn blows oboe and cellist Kate LaVerne and violinists Shelby Dems and Davoli enthusiastically bow Doyle’s charts as Broikos bemoans, “I’m watching us go down slow.”

Allyn may have watched his relationship with Laura Austin “go down slow,” but now he’s happily remarried to a native Catalonian, Sara, whom he thanks in the Forgottensong liner notes for putting “the muse back in music.”

Yes, Renaissance man Scott Allyn is now a man of the world with hopes of bringing needed medical services to developing nations such as those in Sri Lanka and Kenya. While the good doctor’s hacking his way through the red tape in those distant outposts, he has recommitted himself to music.

“My next record’s going to be much more rootsy, more country” he said. “And for the first time, I’ll be doing the singing.”