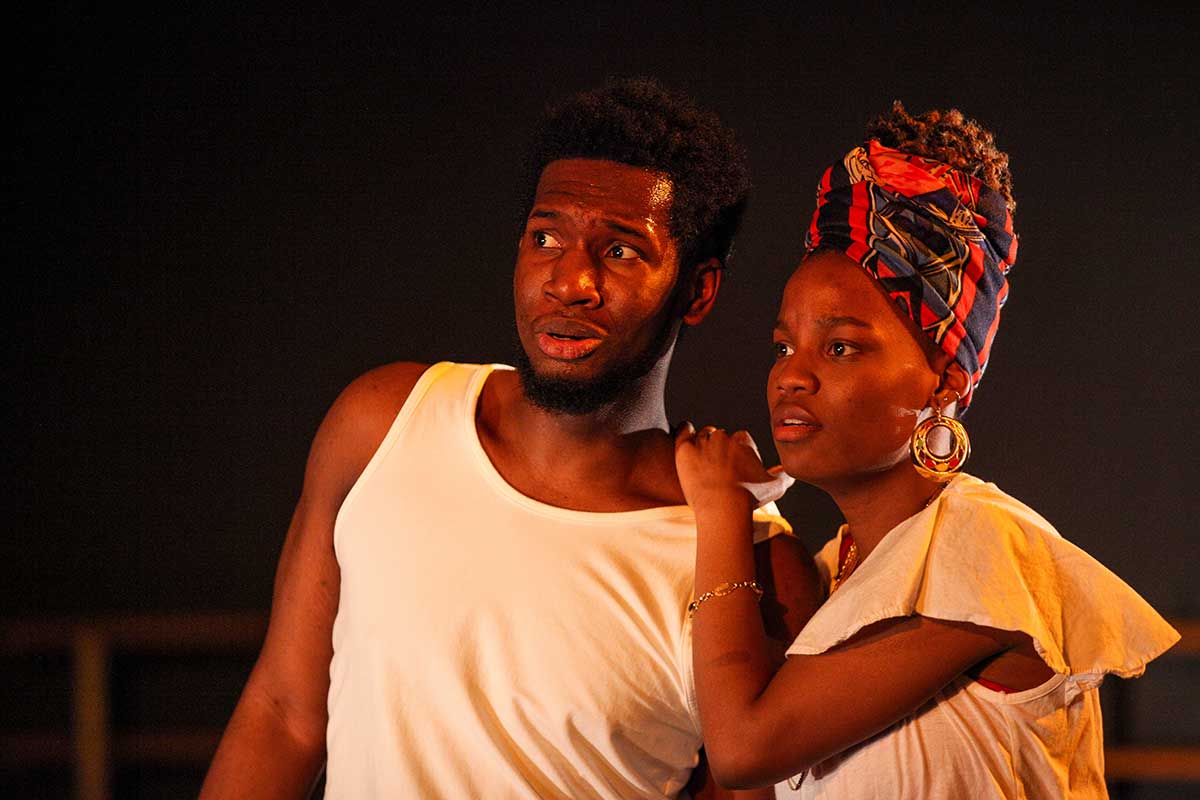 From a distance, Jackie Sibblies Drury’s 2012 play with the 27-word title, a Syracuse University Drama Department production running through Sunday, March 3, appears to be a drama about the horrors of imperialism. White colonial invaders slaughtered up to 80 percent of the Hereros tribe — thousands of people, more or less for the hell of it — as the first genocide of the 20th century. The playwright examines some artistic and philosophical questions: What are the ethics of making theater out of the most vicious cruelty? And can metatheater, or more broadly post-modernism, break out its distancing irony and deliver hot passion?

In the name of accuracy, the full title is We Are Proud to Present a Presentation about the Herero of Namibia, Formerly Known as South West Africa, From the German Südwestafrika, Between the Years 1884-1915. Drury should be advised that ungainly titles discourage new productions. Arthur Kopit’s excellent black comedy, Oh Dad, Poor Dad, Mama’s Hung You in the Closet and I’m Feeling So Sad, has been pretty much ignored for more than 50 years.

At the beginning of the action, six actors troop in from a far corner door of the barest of stages. Three performers are white, three black, and everyone gets along swimmingly, with snacking on junk food and conspicuous hugs implying shared affection. From the group emerges a spokesperson, cited in the program as Actor 6 (Brittany Adebumola), wearing an African-style turban of colorful scarves. She has to begin with a lecture.

Many audience members might not be able to find Namibia on a map and are unaware that Germany once had a colonial empire. Too much exposition is generally deadly in drama, and so Drury, enhanced by director Gilbert McCauley, a newcomer specializing in black theater imported for this occasion, tries to lighten things up. This might require players to mime the outlines of neighboring countries, like Zimbabwe and South Africa. We are heading for heavy dramatic material, and this gratuitous facetiousness grows wearisome as well as needlessly diverting us.

The Germans, knowing little of the vast land they were occupying, initially favored the Herero over the rival Nama, much as the Belgians had once favored the Tutsi over the Hutu in Rwanda. Things went smash after the financial losses from the failure to build a railway to the interior. The colonists began seizing land from both tribes, and when the Herero objected an “extermination order” went out. Some tribesmen were forced into indentured labor while others were filled with bullets.

A substantial photographic record survives, but when it comes to words about these years we have only the letters sent home by German soldiers. None of the Herero or Nama can speak, a common fate of the colonized in imperialism. Many of these are love letters addressed to Sarah (Amanda McCormick), standing for all the girls at home. This prompts black players Isaiah Brooks and Gabriel Cano-Garraway to ask in their own voices, “Are we just going to sit here and watch some white people fall in love all day?” and “Where are all the Africans?” The lighter-skinned Cano-Garraway, with spiky braids, is usually the more aggressive, while the darker Brooks is more reflective.

Drury is confronting one of the conundrums of post-modernism: How much can we measure reality beyond the text? The soldiers were not reporters nor were they subverting Germany’s colonial claims. And bland or even insipid as the letters might appear, when given a close reading they do reveal telling matters in the nooks and crannies.

The concept of treating the play as an artifice and having actors comment of how they feel about playing it goes back at least to Luigi Pirandello 90 years ago. Namibia, however, seems closer to Annie Baker’s well-received Circle Mirror Transformation (2009), as the out-of-text conflicts between actors rival those of the characters in the play. A continuing question is how much performers can bring from their own experiences into the building of dramatic characters. After all, none of the players are German, and how many of us have been to Namibia? Drury’s Namibia is a drama, not a history lecture. When we don’t know, we have to project.

Some of this breaking-through-the-walls effect can be amusing, even though it not may be related to our comprehending the slaughter of the Herero. A delicate little German tune gains heavier rhythm from stomping feet, which leads to an African beat and finally morphs into a rap lyric.

A German soldier (Weston Barnwell) begins to pluck a banjo and another (Alex Giganti) starts to speak in an accent from one of the former states in the Confederacy. Barnwell’s white guys often speak expansively, while the round-faced Giganti gets the hotheads. Drury also has characters compare the slaughter of the Herero to the Holocaust. From this point Namibia merges with the Jim Crow South. During the time of the German colony, Americans lynched between 300 and 350 black men every year, often in a kind of celebration with families attending. Amid throbbing music, a black actor has a mask put over his face, and we prepare for an onstage execution.

It’s a theatrically thrilling experience, providing substance that the perception of Namibia was not so far away, and that the United States was equally vile. But it’s not the catharsis 100 minutes of lively action led us to expect.