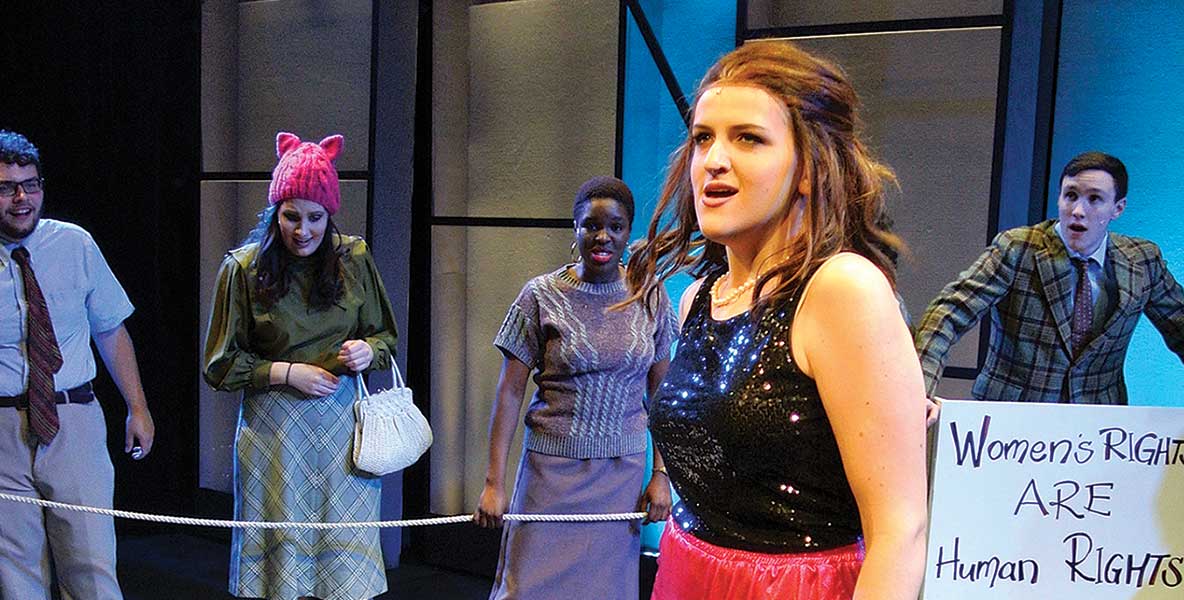 The acting students at Le Moyne College tackle a rare challenge: a musical, which hasn’t been the standard fare at the college’s Coyne Center for the Performing Arts. Dolly Parton’s bouncy 9 to 5: The Musical runs through Saturday, March 2.

Under artistic director Matt Chiorini, the drama department was once characterized more by modernist masterworks like Garcia Lorca’s Blood Wedding. But given the ubiquitousness of the musical, training students in that vibrant form seems like a prudent academic idea, plus it’s also fun.

To take everybody in a new direction Le Moyne has imported a New York City-based rising star, Scott Scaffidi, who has also appeared at SUNY Geneseo, to run the thing. If he thought working at Le Moyne would add luster to his resume, he has come to the right place.

Parton’s 9 to 5 was less than a smash when it opened in 2009, and is based on a 1980 movie with three female leads and a male villain. But Parton, like her character Doralee, is easily underestimated. She has mastered the whole range of musical repertory, punching out rhythms and idioms we did not know she had in her. At most there are two numbers that might be classed as country. Otherwise her heart is on Broadway, not in Nashville.

The book by Patricia Resnick, who also wrote most of the original movie script, has enlarged the action so the four principals are now part of a crowd, with a male and female chorus who fill the several production numbers. These are fabulously choreographed by Scaffidi, taking full advantage of the Coyne stage, including a second level above the rest of the action. Among the most arresting is the opening title song, with workers getting dressed and ready to go. The initial theme is work itself, not just women’s roles in it.

By being time-specific, back when keyboarding meant a Smith-Corona typewriter and Mad Men–style male chauvinism was unchallenged, the staging also reminds us how uncannily prescient the original movie was. The overbearing boss, Franklin Hart Jr. (Tino Laterza with splendid smarm), may fall short of contemporary predators like Harvey Weinstein or Roger Ailes, but his aggressions are more readily staged. His petty piggery fosters his leering and condescension, like knocking a cup of pencils off his desk so that his “girl” has to get down on her hands and knees to pick them up.

The musical follows the trajectory of the movie, except that characters here may seem fuller when singing their hearts out. Into the bustling offices of Consolidated Industries stumbles the shy, awkward divorcee Judy Bernly (Morgan Smith), easily flummoxed by a Xerox machine. She is taken in charge by the self-assured Violet Newstead (Megan Lees), who explains how things work in the duet, “Around Here.” Violet warns Judy against associating with the buxom blonde Doralee (Danie Merrill), thought wrongly to be sleeping with the boss.

At one glance any of the three might be considered the lead, starting with Doralee and her two big production numbers, “Backwoods Barbie” and “Cowgirl’s Revenge.” Merrill’s physical evocation of Dolly, and even more the hot-trotting insouciance, will probably be the aspect of the show audiences remember most conspicuously. But Resnick and Parton did not write it that way. In a display of uncommon artistic generosity, Parton has written even bigger numbers for the other two women as well as for the traitor to her gender, Roz Keith, the office suck-up to power.

Roz (Samantha Overton) would eagerly snitch on any office worker disloyal to Hart. Her first-act declaration of lust, “Heart to Hart,” done in gospel style with choir, is a show-stopper that ranks with the most hilarious moments of 9 to 5, of which there are many. Dangerous as she may be, any crumb of attention from the man in charge can mollify her.

The role of the top woman in the office, Violet Newstead, originally belonged to Lily Tomlin but was tailored for the take-charge Allison Janney on Broadway. Taking charge is what she does with the second act’s opener, “One of the Boys,” which also pulls in the entire ensemble. Director Scaffidi adds hilarious glitz to Violet with Lindsey Quay Voorhees’ Disneyesque costumes for “Potion Notion,” a fantasy involving disposing Hart with poisons from the Brothers Grimm.

In the film the naïve newcomer Judy was played by Jane Fonda, cast wildly against type. Here Judy traverses the largest arc, from mouse to tigress, and takes over the show. As Judy, tall Morgan Smith is a graduating senior and the most experienced member of the cast. She provides variety never asked of Fonda, such as in the Warner Brothers movie spoof “Dance of Death.” She concludes the show with the most trenchant feminist declaration, “Get Out and Stay Out.”

The Coyne Center may be one of most protean venues in the area, but before 9 to 5 it has never had to accommodate a pit orchestra. Music director Greg Giovanni has assembled 12 players, including two trumpets and a trombone, and has placed them behind the double-decker set. Credit sound designer Joel McKissick with preventing the invisible band from being muffled.