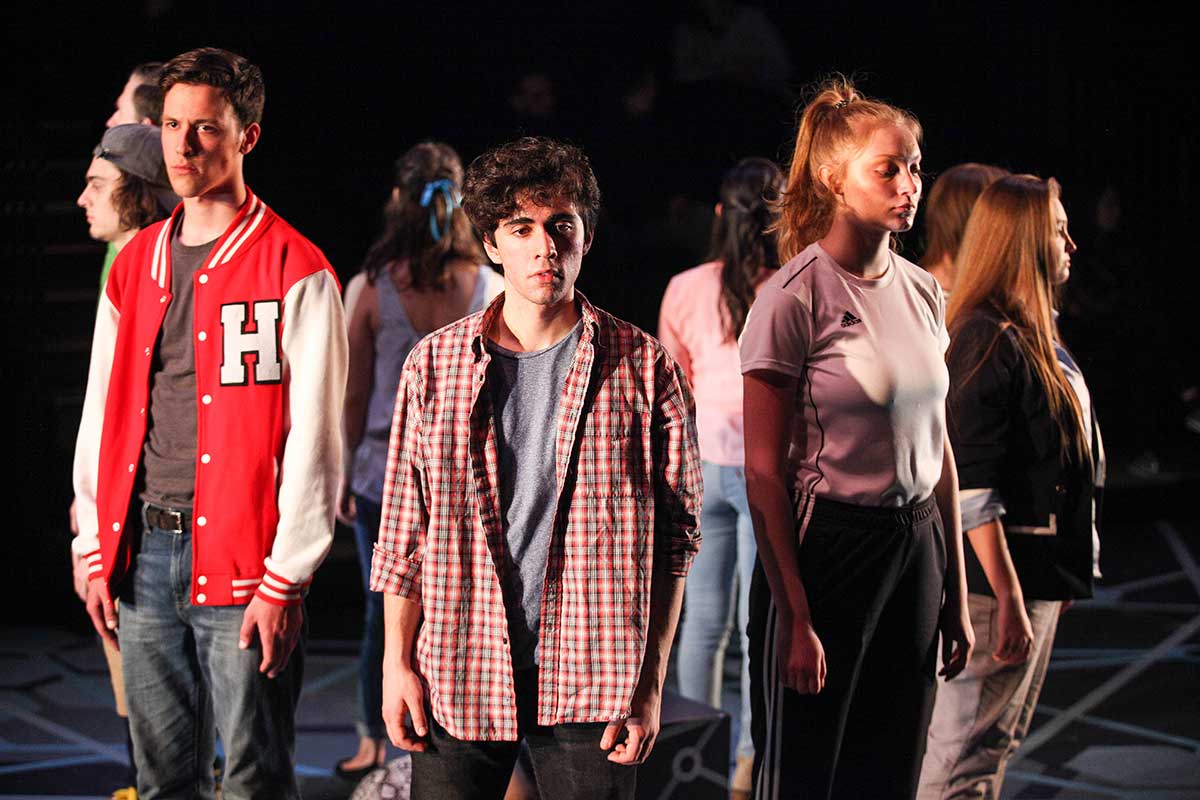 Rape, forced intercourse, was first a moral question: a sin. Subsequently it became a legal question: a crime. More recently it has become a political question.

When we hear about a posse of high school football players repeatedly raping an intoxicated girl and posting their deed on social media, many in the audience will have their minds made up before the action of Naomi Iizuka’s Good Kids begins. If the story were as simple as our preconceptions, Good Kids could not so readily rivet our attention for an uninterrupted 100 minutes. The season finale from the Syracuse University Drama Department runs through Saturday, May 11.

On the night of Aug. 11, 2012, star players at Hoover High School in football-obsessed Steubenville, Ohio, did indeed commit rape. Previously best-known as the hometown of Dean Martin, Steubenville is a river town right across from West Virginia with sharp senses of class differences. Originally commissioned by the Big Ten Theatre Consortium’s New Play Initiative in 2014, it has been performed on a number of college campuses but not in commercial theaters. It is designed to provoke discussion.

Neither is it a polemic, even though the consortium has favored women playwrights providing roles for female players. Once we get into it, Good Kids feels a bit like Moises Kaufman’s The Laramie Project in which diverse townies take contrasting views of the murder of Matthew Shepard. The difference is that the speakers in Laramie were tape-recorded, whereas the 12 characters in Good Kids appear to be fictional composites.

At other times her play seems to borrow from movie director Akira Kurosawa’s Rashomon, which also happens to be about rape. In certain critical scenes, Iizuka portrays characters speaking one way, and then reruns the action with some of the same words, giving strikingly different implications.

Iizuka’s text provides for two critical points of view of the action. Perched high above the action at stage left, with her laptop before her, is the narrator Deirdre (Carey Cox), filling us in on details and commenting on what she feels might be our perceptions. Do we think that males are the more aggressive gender? Well, it’s not that simple.

Cox is a disabled performer with professional credits. Director Holly Thuma, a longtime voice and dialect coach, has invited her for this role. Cox’s canes and limited mobility add resonance to her final speech.

On the other end is the Goth Skyler (Gaelyn Smith), excluded by the ruling cliques as a kind of freak who doesn’t belong. Like Deirdre she also follows events on her laptop and knows all the characters firsthand.

Action begins among the girls, with the familiar game of who’s in and who’s out. The parents of cool girl Amber (Maddie Allen) are out of town, providing a venue for a party. Amber judges that the new girl Kylie (Catie Kobland) passes muster and does not refuse Kylie’s cousin Chloe (Valeria I. Berdecía Martinez) when she begs to be invited, even though she’s from the wrong high school. But Chloe’s best friend Daphne (Claire St. Marie) is abruptly rejected as too talkative and freakish, told to keep her mouth shut and get lost.

The entrance of the four players from the hometown team, the Mustangs, stops the show. Choreographer Michele Dunleavy has designed a foot-stomping fertility dance that could have been lifted from the files of National Geographic. We quickly discern that tall Connor (Zachary Pearson) is the alpha male of the tribe, Ty (Justin Slepicoff) and Landon (Anthony James Hernandez) are stalwart cohorts, while thick curly-haired Tanner (Logan Shiller) is a reluctant follow-along.

The Mustang players, with the exception of Tanner, take a different view of Chloe’s sartorial choices. Additionally, Chloe welcomes inhibition-smashing booze. And as Deirdre reminds us from her perch, the whole party is alive with throbbing, Dionysian music.

In a play written by a woman and directed by a woman, we will not see women exploited on stage. But there, lumped under a blanket with her bare feet extended, lies the violated Chloe. She asks for all her clothes, from her panties outward, which she proceeds to wriggle into while still under the blanket.

Like most teenagers since the introduction of the smartphone, the partygoers have put the string of events online. Assuredly, a call went out to 911. In a futile desperation, all the perpetrators try to delete all messages. Blackboards, however, disappeared a generation ago, and electronic communication is there forever.

There is no onstage trial, only a cacophony of voices, when the actors playing the Mustangs assume the personae of fathers and friends. Audiences will recognize defenses from other cases in the last five years, like the lacrosse player at Stanford. The boys are good kids, and why should they have their budding careers ruined for this? We also hear the icy, blame-the-victim cliché recently uttered by Rep. Steve King of Iowa: “If she’d only kept her legs together this would not have happened.”

Good Kids is an ensemble work written for a college company that can be expected to have a surplus of female talent. Director Thuma and choreographer Dunleavy fill every corner of the stage with action. Each performance is flawless. And Gaelyn Smith, as the excluded Skyler, brings such presence that she cannot be ignored.