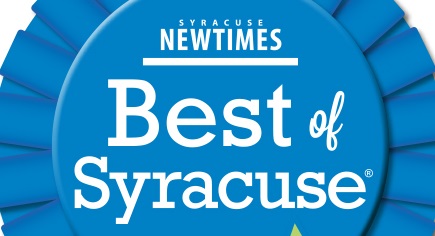 The Syracuse New Times prides itself on being a creative, alternative weekly that brings you – our readers – the best in events and goings-on throughout Central New York. Part of this is our annual “Best of Syracuse” contest, which invites people from across the area to vote to see which businesses and local personalities are the best of the best, from best sushi restaurant to best florist.

This normally happens once per year in the fall, but what if it happened more often? After hearing complaints from some readers that the voting survey is too long and has too many categories to go through at once, we thought maybe breaking it up seasonally would be better. This would cut down on the number of categories, would expedite the voting process and would be more relevant for certain businesses (for example, it’d be better to know who has the best golf course heading into spring instead of heading into winter).

But we also worry that this could diminish the magic of the event, which normally turns into a month-long “Best of Syracuse season” hype fest of businesses and fans urging friends and family members to get out and vote, culminated in a large “congratulation” party hosted by us. On top of that, media outlets are churning out new surveys all the time to figure out who has the best X or Y, so do we really want to put more on our readers by splitting it up?

So, we thought we’d ask you! What would you like to see happen with the contest? Share your thoughts.

Here are the results of last week’s poll, which asked if you agreed with President Trump’s “zero tolerance” policy: