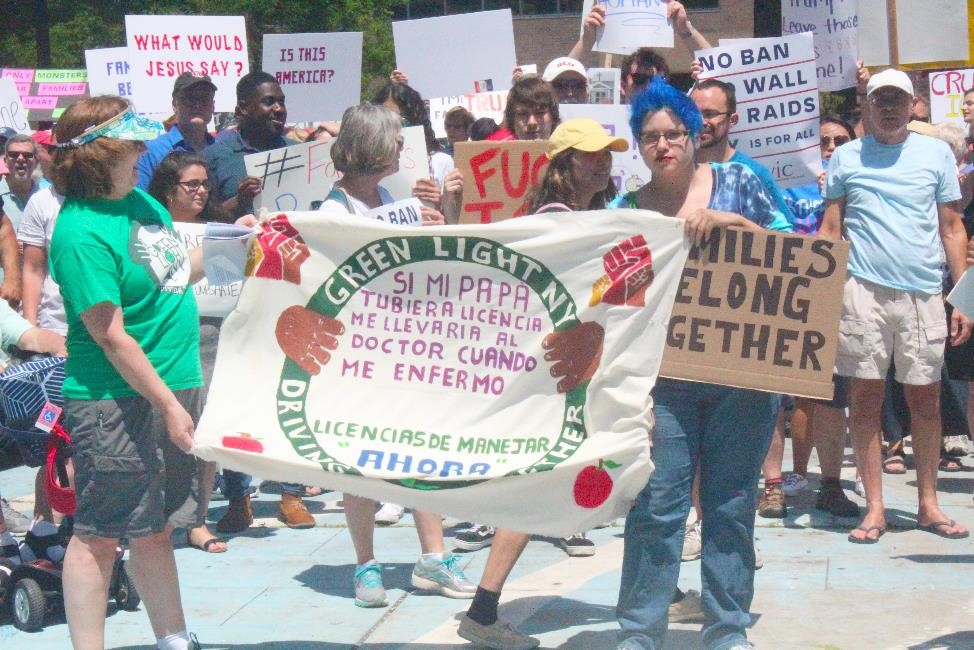 Sarah Hudson, a family doctor in Rochester, carried her 1-year-old son on her back; she tucked a sign reading “Babies Need Mommies” into the wrap that held her baby. Nearby, her older sons, 3-year-old Isaac and 5-year-old Gus, hoisted signs that read “Don’t Cage Kids.”

“As a parent I cannot believe what our country is doing to families,” Hudson said. “As a physician, I am appalled by what is happening.” Family separations that result from the Trump administration’s zero-tolerance immigration policies reflect a “warped sense of justice,” she said.

The Hudsons joined about 500 people Saturday, June 30, at Syracuse’s Families Belong Together rally at Perseverance Park on South Salina Street. Plans for about 700 events in 50 states emerged as anger and horror greeted recent revelations that more than 2,300 children separated from their migrant parents at the U.S. border are living in makeshift shelters and foster homes. 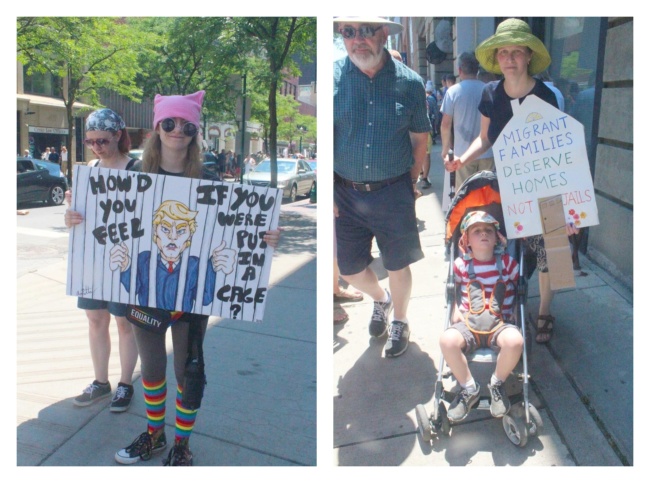 Hudson’s mother, Karen Grimm of LaFayette, made the family’s signs. “What’s happening is appalling,” said Grimm, who volunteers for InterFaith Works, one of two Syracuse agencies that assists refugees. “I understand the issues of the vulnerable and how marginalized people have so few resources,” she added. “Even though we are imprisoning them when they come to this country, it still looks better than where they were living.”

Many at the rally — even those who had never before attended a political protest — said pictures and recordings of sobbing migrant children calling for their parents propelled them to denounce family separation. “Abolish ICE,” the crowd chanted, referring to the Immigration and Customs Enforcement agency.

The nationwide marches drew hundreds of thousands of people, according to news reports. They came two days after hundreds of protesters took over a U.S. Senate office building to call for the abolition of ICE and the end of family separation and detention. About 575 women were arrested during that event.

On Friday, June 29, Sen. Kirsten Gillibrand (D-N.Y.) called for an end to ICE, saying in a tweet, “It has become a deportation force.” A Quinnipiac University poll released June 18 found that 66 percent of voters disapprove of separating children from parents who cross the U.S. border illegaly, planning to request asylum.

The Syracuse rally attracted a predominantly white crowd. Protesters included many young parents, several of whom became tearful describing their thoughts about losing their babies, some of whom they were still breastfeeding.

“I never thought we’d be in this place as a country,” said Meagan Weatherby, who lives in Syracuse with her husband, Thom Dellwo, and their 22-month-old son. “For anyone who has a family, this issue has a visceral effect,” she added through tears.

Signs included references to Nazis, fascism and the Gestapo. Some targeted Melania Trump: “Melania was a refugee” and “Yes, we care,” the latter a reference to the jacket she wore when visiting the border recently. Other signs criticized John Katko, Republican representing the 24th Congressional District. His Democratic opponent, Dana Balter, attended the rally but did not speak publicly. 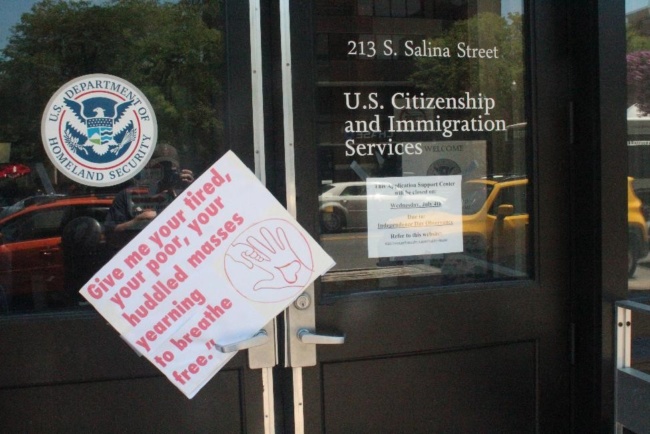 This sign quotes the words engraved on the Statue of Liberty. (Bill DeLapp/Syracuse New Times)

“Just because we don’t have driver’s licenses, the police stop us and sometimes that is because of the color of our skin,” Crispin Hernandez said, according to a translation of his Spanish. “Sometimes they call ICE and deport us.”

After listening to several speakers, most of the protesters marched three blocks, chanting all the way, to 401 S. Salina St. The building houses Café Kubal, several apartments and an unmarked ICE office. Protesters hung a sign reading “ICE Kidnaps Migrants Here. Abolish ICE” on the front of the building.

Paramount Realty owns the building. Robert Doucette, one of Paramount’s partners, did not respond to a phone call or email seeking comment.

As the protest broke up, a few people left signs, flowers and stuffed toys outside the glass doors. “Families Belong Together,” read one sign, resting behind a stuffed cat and a toy truck.

Should the Best of Syracuse contest be multiple times a year? (poll)
Teens flock to Syracuse to provide home improvement during workcamp
To Top