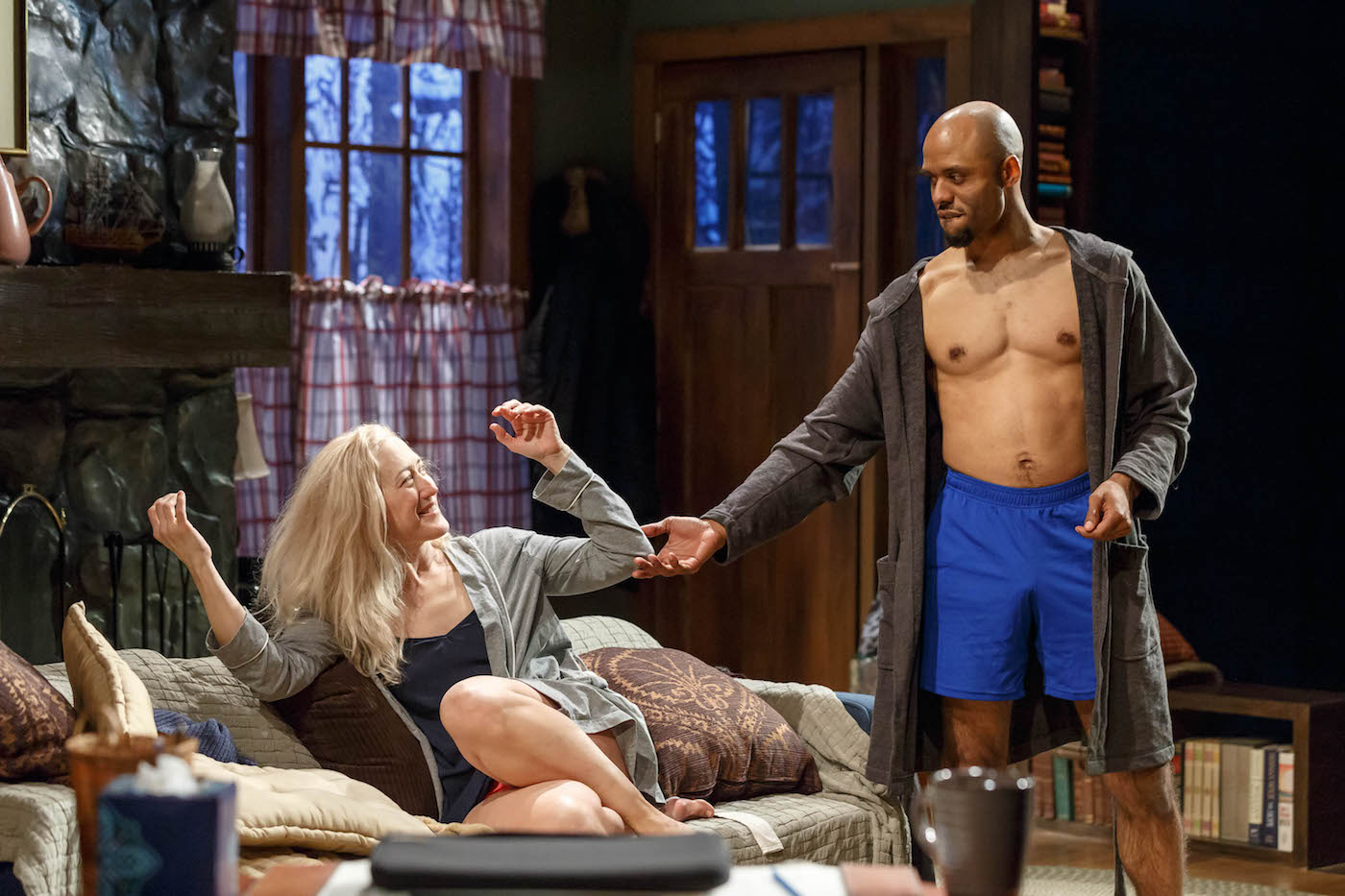 Kitchen Theater’s “Sex With Strangers” is more than what its title suggests.

The title is click bait: We know that going in. Yet Sex With Strangers comes festooned with other allures, as demonstrated by the new production running through April 2 at Ithaca’s Kitchen Theatre Company.

Opening in 2014, Sex With Strangers has been a boffo stage success for top television writer Laura Eason (House of Cards, gags for Jon Stewart on The Daily Show). In the last year it has become one of the most produced new plays in regional theaters across North America. Along with delivering on many of its promises, including the one in the title, it has new things to say about the centuries-old battle of the sexes and the ways we shape each other.

The 30-ish, refined Olivia (LeeAnne Hutchison) and the younger, streetwise Ethan (Darian Dauchan) are indeed strangers when fate throws them together in the same cabin at a snowbound, Yaddo-like writers’ retreat in northern Michigan. Differences emerge immediately. Ethan thrusts his smartphone in different directions, hoping to connect with Wi-Fi and curses when he comes up short. Olivia purrs that it is a freedom to break from the world, to be alone and quiet, and to contemplate. This is solid Playwriting 101, because the internet, and how it has changed writing and changed us, is a major theme of Sex With Strangers.

Once past that, things warm up quickly. Laura has published a novel, evidently a disappointment; amazingly, Ethan has read it and has nothing but praise for it. He’s also been publishing and admits, almost in passing, that he’s been on the New York Times’ bestseller list.

The words “Sex With Strangers,” it turns out, are also in Ethan’s tell-all blog, in which he salaciously details the ease with which he can have sexual intercourse with women he has just met. In earlier times men who talked this way were called cads, but Ethan has turned it into a fortune. The blogs are turned into hardcovers and e-books that bring in hefty cash rewards. Clear-eyed, Ethan knows he is not producing “literature.” He quotes an agent as saying that his blogs are one step above catalogs and fortune cookies.

Yes, what he does is outrageous, and it’s worse when he admits to lying. To which he answers, “It doesn’t matter: It’s the internet.”

As should be expected, his blogs and books generate a furious response. He is also thunderously trashed on Twitter, and websites are devoted to ripping his guts out. But women are still lining up to sleep with him and a shot at internet fame. Deep down, however, he yearns to be accepted as a literary novelist, just as Olivia does.

We often hear Ethan through Olivia’s ears. His praise for her first novel might have buoyed her, but we gradually come to learn that the general response was crushing to her vanity. Despite their sexual intimacy, she feels that his reading of her work in progress, a ragged paper manuscript, would be a violation of her person. When the Wi-Fi is restored, Ethan has 839 emails, Olivia, seven. We wince for her needfulfulness, even when we can’t ignore her ambition.

The second act switches to Olivia’s apartment in Chicago, which has the same proportion as the writers’ colony cabin and is framed by set designer David L. Arsenault’s book-filled proscenium. Five scenes here stretch over a year and a half, including the passing of Olivia’s dreaded 40th birthday. In some ways it’s the second semester of novelist training, on making it. There is much chic name-dropping: Jonathan Lethem, Jonathan Franzen and Zadie Smith. Eason expects you to know that the pinnacle of literary publishing is F.S.G.: Farrar, Straus and Giroux.

We also realize at the end Sex With Stranger is a variation of the Pygmalion story, only the guttersnipe has schooled the aesthete with better pronunciation.

Darian Dauchan, a company favorite (The Brothers Size, 2013; Death Boogie, 2016), bats out about one laugh for every 50 words all through the first act. Newcomer LeeAnne Hutchison, with a somewhat Streep-esque bearing, has the expressive body of a skilled dancer.

This is also the final assignment for retiring artistic director Rachel Lampert. She builds on her strengths, highlighting the sparkling wit of the dialogue while never downplaying the electric eroticism. With director Lampert at the helm, Kitchen Theatre’s Sex With Strangers lives up to the acclaim.

Layover Lark Flies Up, Up and Away
Touring Productions Visit Three College Campuses
To Top