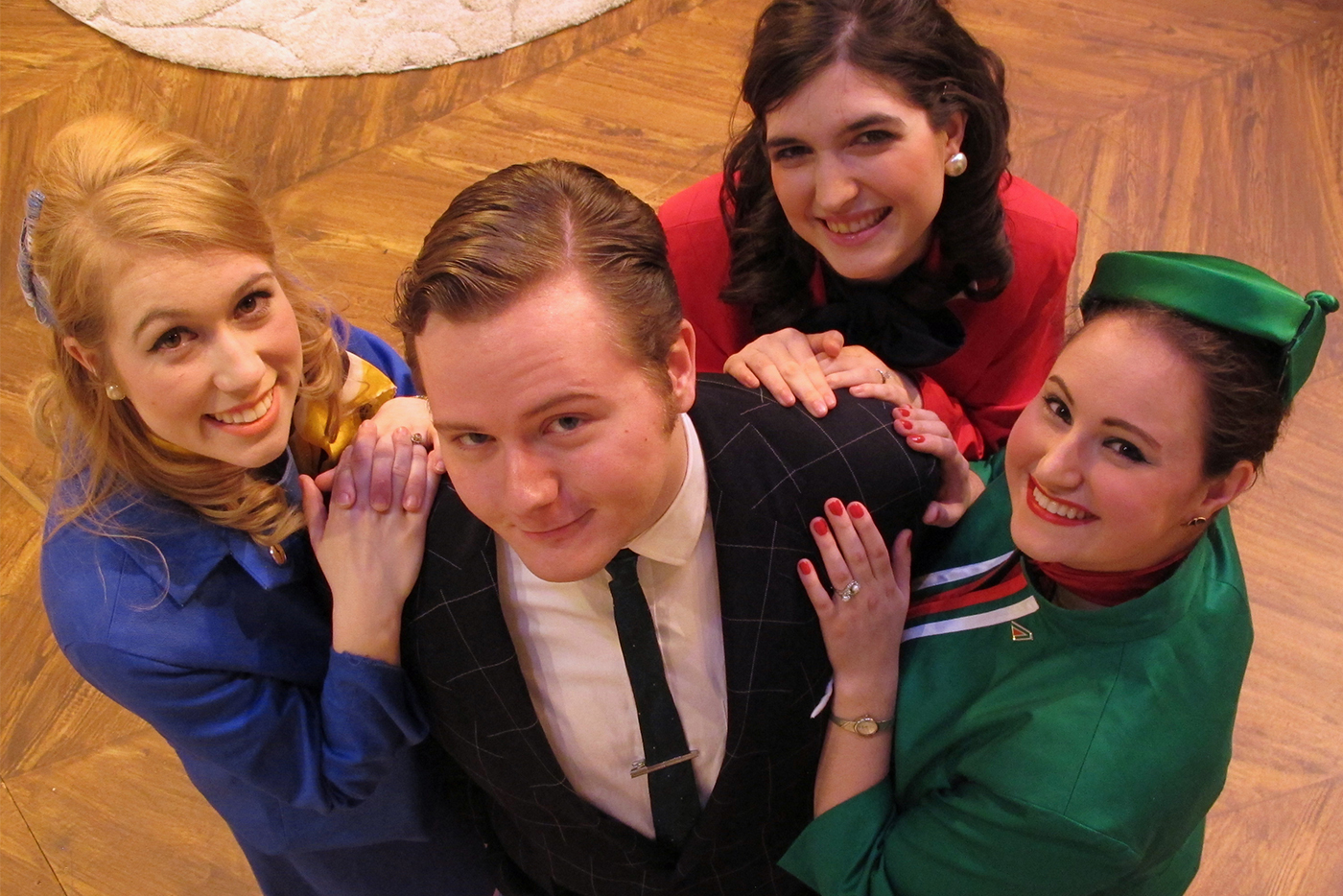 The most widely performed French play worldwide is not La Cage aux Folles, Les Miserables or even Tartuffe. No, it is a quintessential farce featuring seven slamming doors: Boeing, Boeing by a Frenchman with an Italian name, Marc Camoletti. A fun revival serves as the Boot and Buskin Theatre Club’s season finale, running through Saturday, March 25, at Le Moyne College’s Coyne Center for the Performing Arts.

Boeing, Boeing opened in Paris, 1960, and ran for 19 years. An adroit English translation by Beverly Cross (husband of Maggie Smith) and Francis Evans opened in London in 1962 and ran for seven years. A Broadway run lasted only 23 performances in 1965, however, while the American view of the play has been further sullied by the 1965 Jerry Lewis-Tony Curtis film version.

Yet Boeing, Boeing’s luster was restored when Mark Rylance took on the role of the hapless pal Robert in the prize-winning 2008 Broadway revival. Rylance, the noted Shakespearean who won an Academy Award for Steven Spielberg’s Bridge of Spies, said that Camoletti wrote roles demanding the utmost from a performer.

Boeing, Boeing is as securely fixed in 1960 as the farces of Georges Feydeau are in le belle epoque. To remind us of the era, set designer Karel Blakeley has come up with a kidney-shaped coffee table and wrought-iron legs, Danish modern furniture and a beanbag chair. Costume designer Katie Stomps delivers the kind of uniforms that stewardesses (not flight attendants) wore when the airlines made them retire at age 26. And that’s when people traveled with hard-edged, inflexible luggage in bright colors.

The notion of a “Jet Set” of sophisticated travelers was new, and rapid transportation hither and yon opened doors to subterfuge. More importantly, communication technology lagged behind. How could one be sure if a flight were on time? How soon could one know if a plane were turned back by a storm at sea? Set Boeing, Boeing in the present, and one smartphone call could annihilate the whole enchilada.

In 1960 playboy entrepreneur Bernard (Fred Pienkoski) needed only a bound paper ledger, literally a “little black book,” to keep track of the ladies in his life. They are each stewardesses for different airlines. Tall, lithe Gloria (Rachel Crumley) is in red for TWA. Bosomy Gabriella (Marisa Valent), wearing green, flies with Alitalia. And feisty blonde Gretchen (Kelsey Rich) in blue tends passengers on Lufthansa. Jet flights to distant venues, like San Francisco or Caracas, can keep two stewardesses occupied to allow Bernard to enjoy whichever third lady happens to be in town.

Bernard embodies the Hugh Hefner style of male sexual exploitation, also popular in 1960, with a flattering portrait of himself on display in his living room. He professes the deepest love to each one of them, offering gold engagement rings three times. His reward, of course, is only one thing.

Nervous parents should not be concerned about a bedroom farce produced by a Catholic college, however. As French critic Roland Barthes observed, the bedroom farce not only serves up scant eroticism, it is fundamentally a sternly moralistic genre. Transgressors are humiliated for their sins. That’s one reason why we laugh.

A greater reason is what farce demands of performers. Boeing, Boeing is an unusual choice for a college production for two reasons. The cast is small, and not so generous in providing roles like last month’s Heathers: The Musical. More importantly, the cast must meet professional-level performance standards in breath-stopping timing and balletic clowning.

Although every cast member knocks out a good share of laughs, a disproportionate share goes to two characters: the skeptical, independent-minded house maid Berthe (Samantha Overton) and the guileless schnook-pal Robert (Tom Vazquez), who dropped in at the wrong time. These were roles taken by Christine Baranski and Mark Rylance in the New York City revival. Director Matt Chiorini is asking two students to pretty much meet their standards.

Irreverence is the key to Overton’s Berthe. She’s totally unimpressed with Bernard’s self-infatuation and is completely on to his not-so-clever, really shabby scam. So we love her sharp barbs and share her horrified amazement at what he can get away with. Overton knows how to be cutting, and her wide face serves up a kaleidoscope of emotions.

Vazquez, on the other hand, has to knock us dead with every comic demand: the slow burn, the double take, the pun, the gag, the wiggling ambiguity, and physical comedy employing every part of his body starting with the pratfall and the Buster Keaton-ish fall on his face. An early bravura piece has him struggle to carry up a flight of stairs some hard-edged luggage, a constantly opening umbrella and a golf bag filled with clubs. Everything goes wrong on cue.

This Boeing, Boeing reminds us that humor is a solid, comedy is a liquid, but farce is a gas.