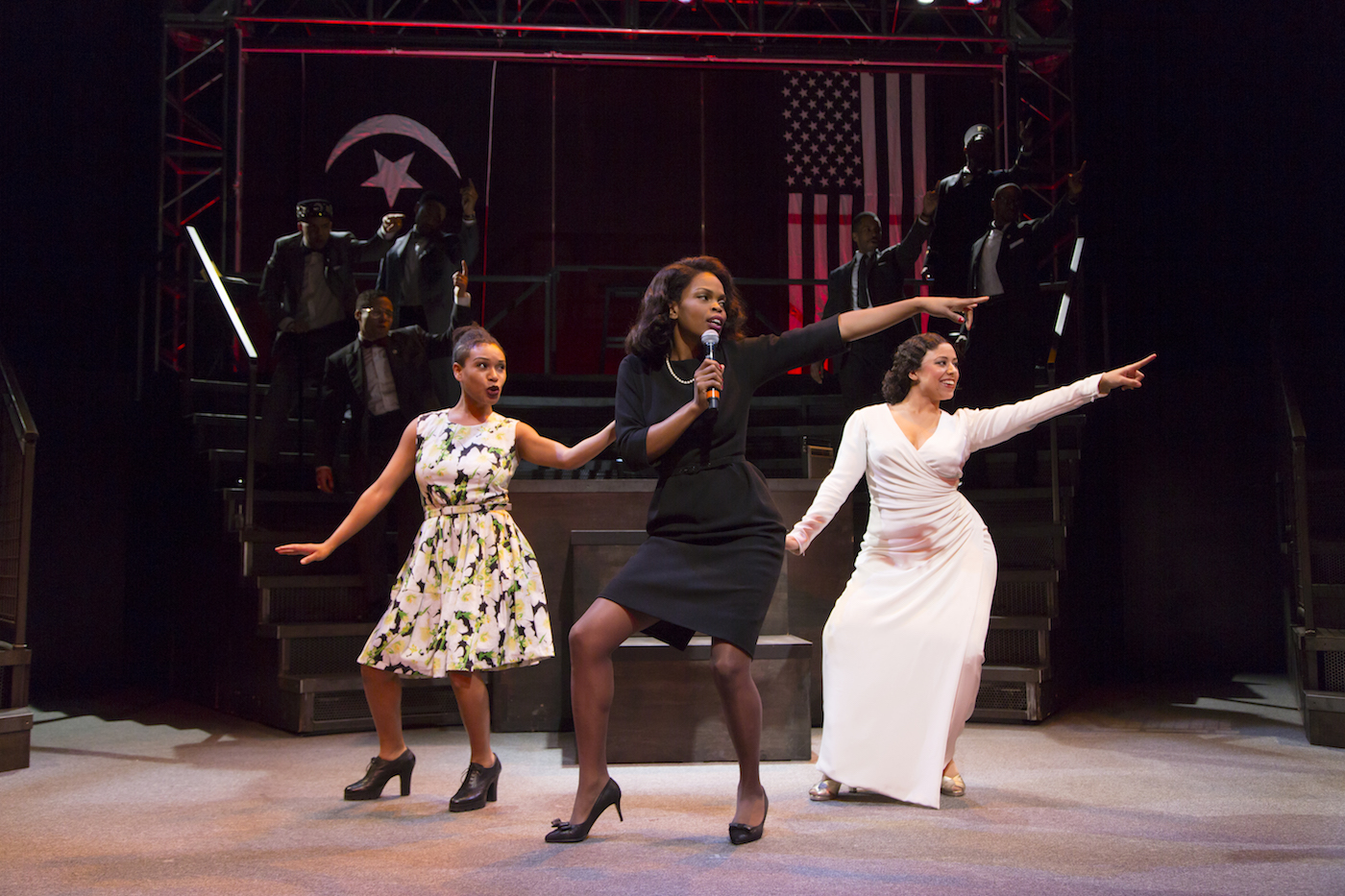 The Acting Company will present touring repertory productions of “Julius Caesar” and “X: Or, Betty Shabazz v. The Nation.”

Julius Caesar, a Grecian war hero and writer-turned-ruler before the time of Christ, does have similarities to the civil rights activist Malcolm X of the 20th century. Both being outspoken individuals, Caesar gained favorites with the lower and middle classes, and the latter fought for the oppressed and, specifically, black rights.

In 2014 John Shaffer, director of programming for the ARTSwego Performing Arts Series, brought the Acting Company to SUNY Oswego, where the group performed Shakespeare’s Hamlet in repertory with Tom Stoppard’s tragicomedy Rosencrantz and Guildenstern are Dead. The central characters of the latter play are friends of Hamlet, and the story is told from their viewpoints.

“I thought it was an amazing thing to do on a college campus,” recalled Shaffer. At the time he was in New York City for a student screenwriting competition, the topic being assassination. Two of the four winners were Central New York students, and they were able to see professional actors read their scripts. “You are able to see a classic text and a reworked story. In terms of critical thinking, it’s really an experience.”

The Acting Company, founded by Yale alumni John Houseman (The Paper Chase) and Margot Harley in 1972, continues its legacy of providing quality repertoire with young, aspiring actors. This year they present an abridged version of the Bard’s Julius Caesar, directed by the company’s associate artistic director Devin Brain, and Gardley’s X: Or, Betty Shabazz v. The Nation, helmed by Artistic Director Ian Belknap.

Brain and Belknap began prepping for this effort three years ago, unbeknownst to them that the shows would fall in the middle of America’s heightened political tension. Both directors agreed, however, that Shakespeare’s tragedy is always popular to mount in the midst of any political change.

On top of producing notable classics and contemporary plays, the Acting Company also brings their shows to diverse venues. “We’ve performed on Indian reservations, where they’ve never seen a real production,” said Brain, “and in 2,000-seat theaters in Los Angeles, where they really didn’t want to see a professional production.”

“It was around the same time where they were looking for something different,” said Shaffer. “They did the whole bus-and-truck thing for 40 years. Instead of constantly packing up and leaving, they wanted to come into an area and get involved in a deeper way.” 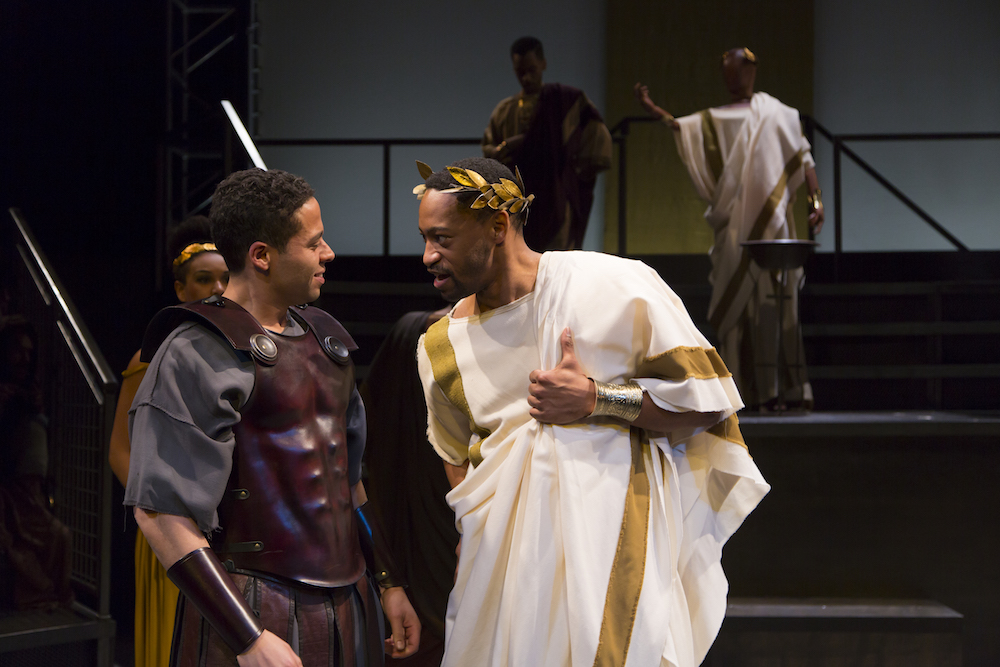 Shaffer got in touch with Le Moyne College and Hamilton College, and both agreed to help with the next incarnation of their theater and education programs. Directors, actors and other industry people visit the campuses, or the colleges would bring students down to New York City, where the Acting Company originates.

“I was reading up on the Kennedys, and I thought, ‘Why not marginalize them?’” said Belknap. “The Kennedys and their stories have been told a lot. Malcolm X’s story isn’t told as frequently.”

Belknap said the next step was commissioning playwright Gardley to get involved with writing X. It’s the second original work Gardley has written for the Acting Company, and the artistic director says his ongoing involvement is terrific. “It’s wonderful. There is nothing like partnering with a playwright.”

After every draft of his play X, Gardley would send it over to the college students at Oswego, who read through it and gave feedback. When the final draft was produced, Belknap came in person and directed the students, who were involved in performing arts or the creative writing program, among others, for the reading, while Gardley was Skyped in.

“When the play comes, we’ll have students who helped create the roles before it got to the professional level,” said Shaffer.

Belknap and Brain worked together to bring these two plays to life in the most concise way possible, with minimal props and stage design. A semicircular theater space is versatile for the courtroom in X and the Roman Senate in Julius Caesar. The actors also perform roles in both performances; Jimonn Cole portrays Malcolm X, the murdered activist, and Marcus Brutus, the murderous conspirer from Shakespeare.

“The idea was to create two paired pieces to generate a new dialogue that’s founded upon the traditions of the past,” said Brain. “The pairing allows the audience to explore the major themes of these works: betrayal, idealism, man’s desires turning to violence. These themes have been with us for a very long time.”

These productions also showcase the first all-black cast in the Acting Company’s history. “It’s a very broadening experience,” said Shaffer. “It shakes away any perception roles have to be played by the same cultural background, and the actors’ abilities and versatility.” Shaffer said that women also take on the male roles in Julius Caesar.

The Acting Company’s production of the Greek drama also breaks the stereotypes of what we’re used to seeing in textbooks or paintings. “These are all of our stories in some ways,” said Brain. “We make these stories acceptable, about us.”

Brain said he has worked paring down Shakespearean plays for years. He feels that theater performances should be either 90 minutes or six hours in length in order to do justice to a play.

Gardley was unavailable for an interview. In a provided statement, he said, “Malcolm X’s story, his life, his speeches, his eyes, the cadence of his voice and his brutal assassination haunts me. His life, for me, feels only half-told.” He also gave credit to movie director Spike Lee’s 1992 Malcolm X biopic. “Few have written or dramatized how, why and who really killed him.”

Gardley’s parents noted that the 1960s was a very fearful time. More than 50 years later, there is another surge of sociopolitical fear that has been bred out of a tumultuous election.

“I am naturally obsessed with this moment in our history. The period has a particular significance because of the current state of affairs,” says Gardley. “This election year, for the first time in a long time, many are genuinely afraid of where the country is headed.

Fear and action leads to death. Julius Caesar and Malcolm X, both charismatic and well-spoken individuals in their own right, met their demises in almost similar methods — at the hands of those they served.

The human rights leader, born Malcolm Little, later changed his name to el-Hajj Malik el-Shabazz. He eventually left the Nation of Islam in 1964 due to qualms against its leader, Elijah Muhammad, because he felt Muhammad was giving Islam a bad name, lacking integrity amid accusations of extramarital affairs. Irritated NOI members assassinated Malcolm X in 1965.

Julius Caesar was also addressing people when his assailants jumped him. The Greek ruler was warned of the Ides of March in 44 B.C., the day when his senate pummeled and stabbed him to death. Cue the infamous line, “Et tu, Brute?” as the dictator’s supposed final words upon realizing his confidant Brutus was behind the conspiracy.

“Both dramas are as much about the assassination of character as they are about the murder of a body,” said Gardley. “Both stories have premonitions and tense political climates, and both based upon the lives of real leaders.”

The audience also has an opportunity to participate, since they are the judge and jury to determine who is right and who is wrong. Both directors also appreciate that high school students are taking the time to witness plays about notable real-life people.

“The plays are very topical for where we are right now, especially with exploring leadership,” said Belknap. “Giving audiences the option to see plays in repertory offers them to see things from two different vantage points.”

“Some may say these two are good, some may say they are tyrants,” said Brain. “And yet they are human. We’re giving audience members an experience where they can question these labels and themselves.”