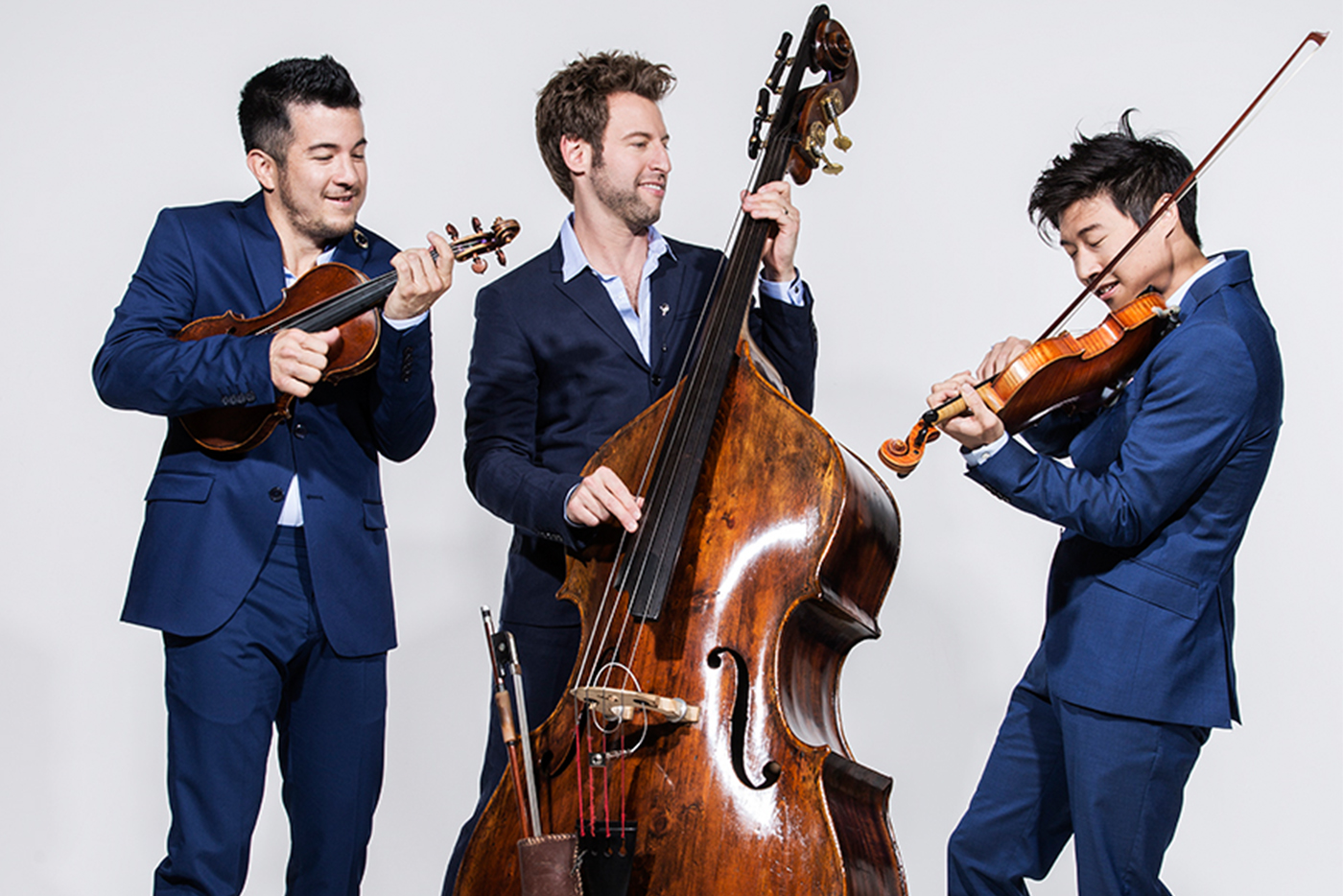 Looking at Time for Three, a trio of young men playing violin and double bass, it’s difficult to predict what sounds are about to happen.

Although they raise their instruments with the stance and stature of classical players, the musical melange that comes bursting out is a surprise. Songs are thick with pop harmonies, as the three players offer arrangements that are creative and lively. The result is polished, but fun; wild, yet precise.

Time for Three, part of the ongoing Skaneateles Festival (through Sept. 3), features Nick Kendall and Charles Yang on violins, with Ranaan Meyer on double bass. The group, now signed to the Universal label, is recording a new album with producer Steve Epstein, who has worked with Yo-Yo Ma and Wynton Marsalis. “When you say that you’re a string trio signed to Universal, people suddenly say, ‘That must be interesting,’” Kendall said.

“The three of us found a unique chemistry,” Kendall recalled. “We were the only ones overtly using improv and jam sessions around concerts and rehearsals. It was only 10 years before that the school went away from dress codes. It’s so great to go back now and see that they teach improv courses. There are new music groups coming out of the classical music tradition. It’s cool to see how the art form has progressed. It was with the spirit of our jam sessions that we found our way.”

The trio combined their classical background with their personal tastes for music by Nirvana, Nine Inch Nails and Smashing Pumpkins, as well as gospel and urban music from Kendall’s Washington, D.C., home.

“We’d mix popular music, bluegrass, jazz, hip-hop and then maybe with a Brahms theme,” he said. “Something like that would make it into our jam sessions. We weren’t trying to be a group. It was our way of unwinding from the intense focus of a given day.”

Although Kendall had started playing violin when he was 3 1/2, it was around age 13 he figured out he was practicing because he enjoyed it. “I started realizing my parents didn’t have to push me,” he reflected. “I owned up to it and connected with the music and violin as a way of expressing myself and I took it seriously.”

That personal connection continues to speak through the group’s music. Whether they’re interpreting pop songs or sharing their own material, it’s easy to hear the passion in their playing.

Regardless, a great idea and a mountain of talent don’t make for an easy road. The group officially started in 2001 with Kendall, Meyer and DePue. Later they brought on Nikki Chooi, “a powerhouse violinist,” according to Kendall.

Earlier this summer, however, Chooi was asked to be concertmaster for the Metropolitan Opera Orchestra. Although the band had contracts and concerts set with Chooi, “It didn’t matter,” Kendall said. “We had to give him that opportunity.”

The band is currently working Yang into the mix. “Charles is a full-out improviser, a songwriter who plays guitar, piano and sings,” Kendall said. “He might even be a more like-minded fit than Nikki was. Although I’m really going to miss the blending of sounds with Nikki, with Charles’ strengths, it’s a completely different dynamic.”

Kendall predicts there will be more composing with Yang, perhaps even with the addition of his vocals. “Charles is a phenomenal singer,” Kendall declared. “We could easily use the application of voice on top of us, but he respects our unique sound already as a band. How can we explore the voice as another instrument, not just apply it from the outside? We need time to tap and nurture that.”

Kendall is excited to see where the new changes will take Time for Three. And the band members are perfectly content to be themselves. “We’ve only had a positive experience because we’re not trying to be accepted,” he said. “We’re just celebrating something different in our own way.”

Time for Three will perform at the Skaneateles Festival on Saturday, Aug. 27, first as part of KidsFest at 11 a.m. at St. James Episcopal Church, 96 E. Genesee St., Skaneateles. Adult tickets are $5, with free admission for ages 18 and under.

Later that day at 7:30 p.m., the trio tales that stage at the Robinson Pavilion at Anyela’s Vineyards, 2433 West Lake Road, Skaneateles. They will be joined by dancers from Company XIV, with choreography by Austin McCormick. Tickets are $22 to $28. For more information, visit skanfest.org.

“Practice. Practice scales and arpeggios. Play the core repertoire, but always practice improv. Go to school and do jam sessions. Freedom comes from discipline. The more you know on your instrument, the more you know the great masterworks and how to interpret them. Bring freedom to those works. It gives you more. We tell kids who say they want to be like us: ‘Work your ass off.’”