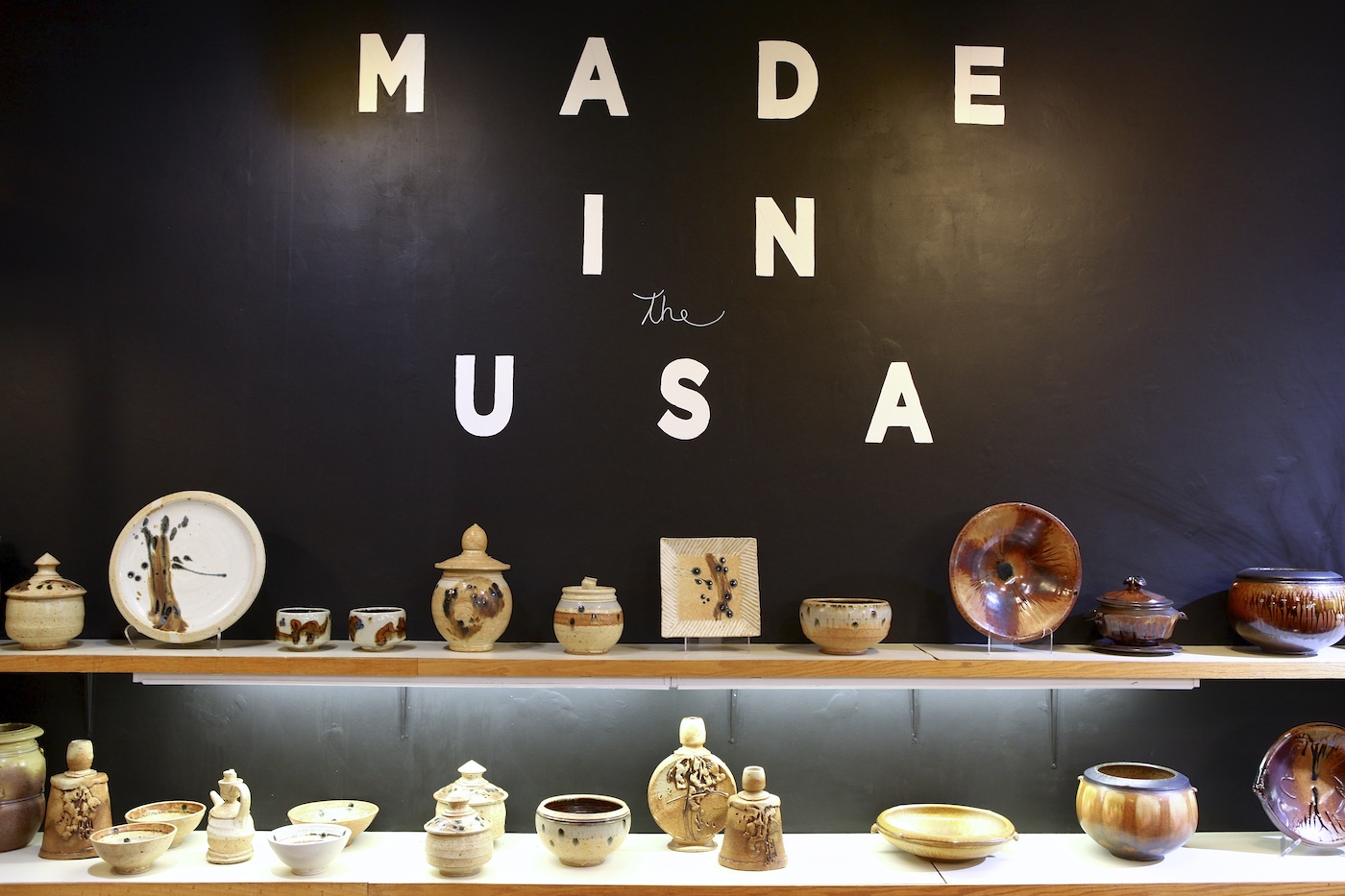 Shoppers can find pottery, paintings and more at local shops and fairs.

During the holiday season, many local consumers will buy mass-produced items such as electronics or toys. However, that type of commerce isn’t the only game in town. There’s a shopping circuit featuring pottery, paintings, textiles and other pieces made by artists or artisans. 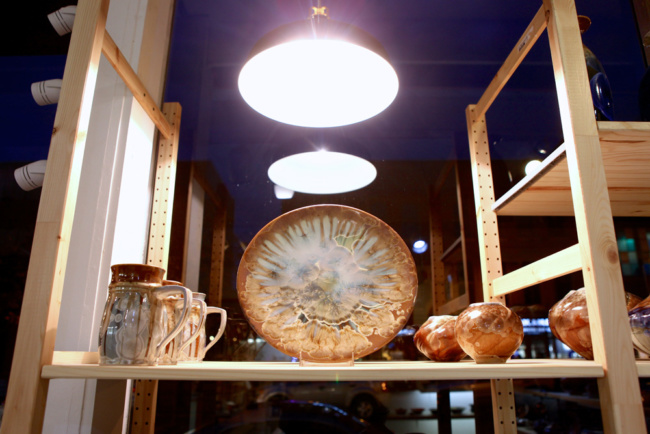 Eureka has experienced more than a name change. Tom Cunningham, one of its founders in 1983, is now collaborating with his grandchildren, Fiona Cipiti and Liam Cunningham. She returned to Syracuse during June to work at Eureka; he attends college in Boston and helps out at the shop during school breaks. Both are learning operations to prepare for a day when they will run Eureka.

In addition, the shop’s layout has been altered. The new arrangement includes pieces on a table seemingly set up for dinner, objects on a crate retrieved from a wood-working studio, and a sofa where customers can enjoy free coffee.

Cipiti said those changes are neither a make-over nor a face lift, just a way of updating Eureka and preparing for its future. They build on a legacy begun by the shop’s founders: Tom Cunningham, Tina Parker, Bill McDowell and Ginger Dunlap-Dietz. And Cipiti says any renovation ties into the shop’s mission: connecting people to one-of-a-kind pieces.

“We want this to be a comfortable environment,” she said. “A place where people can enjoy the work, view something beautiful, perhaps have a conversation about it.”

She and Cunningham are discussing other possibilities, with one being members of Eureka’s staff offering instruction in various media. “Tom and I make decisions together,” Cipiti said. “I’ll pitch an idea, and we’ll discuss it.”

Art Mart, a yuletide venue in its 62th season, has also made a significant change. It’s moved from City Hall Commons to 499 S. Warren St., across the street from the Galleries of Syracuse. Its structure is the same: a cooperative venture in which artists work shifts and share the cost of renting a space. 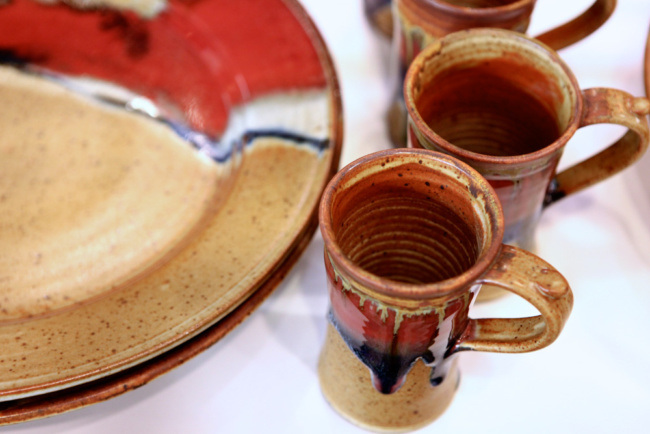 Moreover, the festival provides tables for groups concerned with the environment, peace and social justice issues. And there’s acoustic music as well as food made by the Mission Restaurant staff.

Another upcoming event, the sixth annual Fair Trade Sale, presents goods made by Mayan cooperatives in Guatemala and Mexico and artisans in West Africa, including textiles, baskets, handbags, scarves and other items. Four vendors will set up at the ArtRage Gallery, 505 Hawley Ave., on Friday, Dec. 9, 3 to 7 p.m., and Saturday, Dec. 10, 10 a.m. to 5 p.m. Admission and Fair Trade coffee are free.

Finally, the CNY Artists Gallery, in Shoppingtown Mall, sells an array of prints, jewelry, paintings and more. The gallery has an ongoing relationship with illustrator Richard Williams; Brian Butler, creator of pen-and-ink fantasy pieces; Ron Warford, who does exquisite drawings; and Kamiiron Pritchard, who does portraits, paintings depicting historical scenes, and other work. CNY Artists also sells pieces from an estate sale and books distributed by a regional publisher.

Gallery owner Peter Svoboda says he’s adapting to life in a customer-challenged mall where most of the anchor tenants have left. To draw more people to the site, CNY Artists is offering painting classes taught by Pritchard. The gallery’s December hours are Mondays through Saturdays, 10 a.m. to 8 p.m., and Sundays, 11 a.m. to 6 p.m. For more information, call 391-5115.

The holiday season is prime time not only for local festivals but also for groups like the Syracuse Cultural Workers. They research, design and distribute the Peace Calendar which is sold at independent bookstores, food co-ops and other venues across the United States.

In creating the calendar’s 2017 edition, SCW focused on several themes including climate change. Indeed, the calendar’s cover showcases an image of the People’s Climate March which took place Sept. 21, 2014, in New York City. A second photo, accompanying dates for August 2017, depicts a demonstration in the harbor at Seattle, Wash., where dozens of activists on kayaks protested against oil drilling in the Arctic region.

Another illustration touches on immigration, as seen in a piece blending bright colors and the words “No Human Being Is Illegal.” Regarding the theme of public education, the artwork for September combines a photo of high school students demonstrating and a quote from Diane Ravitch, a prominent critic of privatizing schools and high-stakes testing.

Elsewhere, “Creation of the World,” an acrylic mural, embraces aboriginal culture as interpreted by Potawatomi artist Daphne Odjig. And “The Fight for $15,” artwork for June, references the movement for an increase in the minimum wage.

SCW will be selling the Peace Calendar, now in its 45th year, and other items during this weekend’s Plowshares Crafts Fair and Peace Festival at Nottingham High School, 3100 E. Genesee St., and at SCW’s 400 Lodi St. storefront. During the holidays the shop is open Mondays through Fridays, 9 a.m. to 7 p.m., and Saturdays, 11 a.m. to 5 p.m.

Memories of Mario
The Vault grinds to a halt: Downtown arts venue falls victim to codes issues
To Top