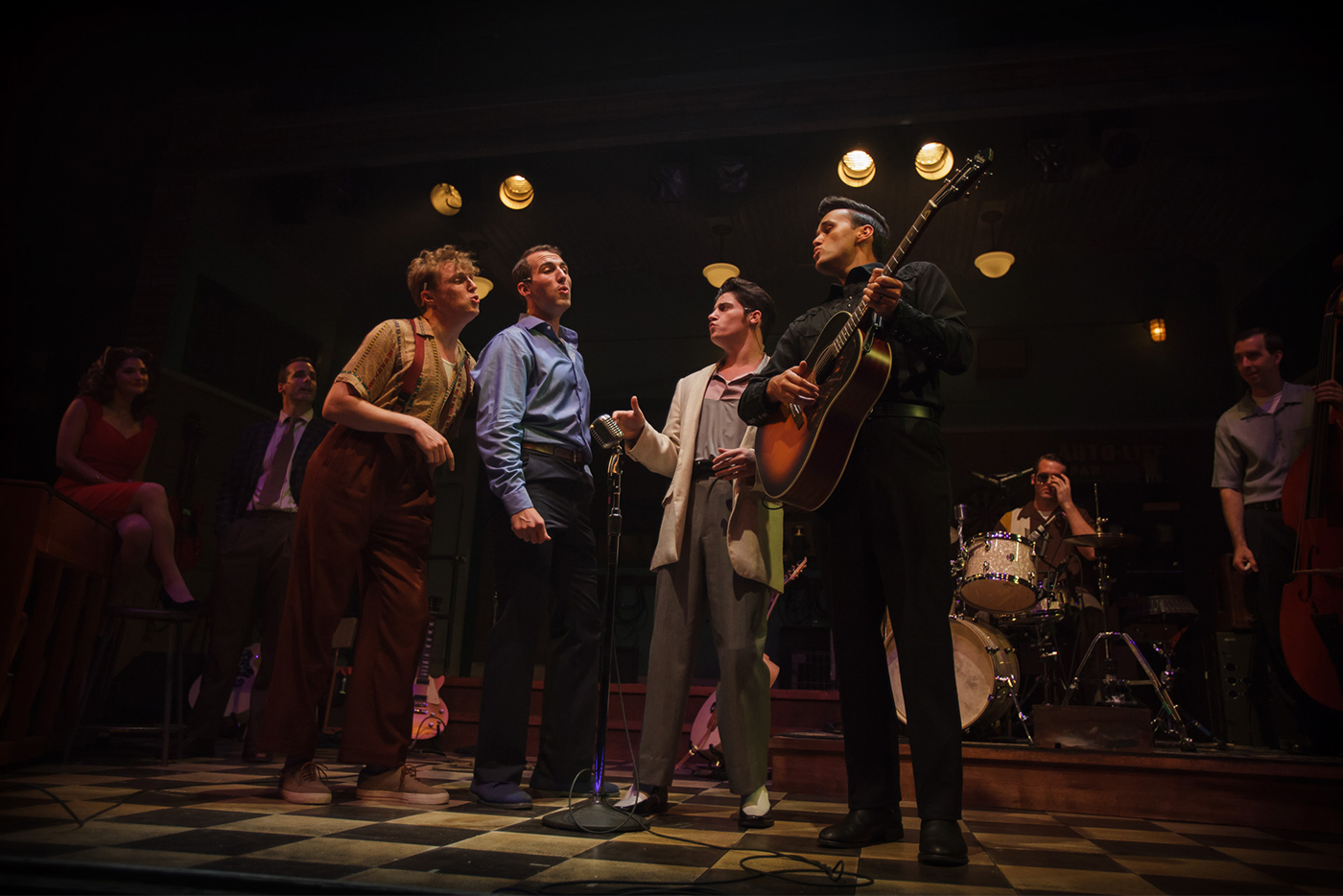 Colin Escott and Floyd Mutrux’s Million Dollar Quartet is the first jukebox musical based on a black-and-white snapshot. At Sun Records in Memphis, Dec. 4, 1956, somebody took a picture of four Southern white singers who were then emerging into the big time.

They were Elvis Presley, 21, seated at a piano, and behind him were Jerry Lee Lewis, Carl Perkins and Johnny Cash. It’s an iconic image, like the one of the sailor kissing the nurse in Times Square on V-J Day in 1945. The show reprises much of the music that would have been heard at that jam session and invents dialogue to explain relationships. The beat was heavy, and the tensions were sometimes electric.

Although this production at Auburn’s Merry-Go-Round Playhouse (running through Oct. 1) is an area premiere, the show has been doing robust business nationally for 10 years, starting in small theaters in Florida. It ran for a year on Broadway, beginning in 2011, and London’s West End in 2012, and has since been a fixture in venues like Las Vegas and Branson, Mo.

Director Scott Weinstein prudently guides the show away from some looming snares. These are not mere tributes or imitations of nascent rock icons in their youth. No, no, not another Elvis imitator, paunchy in sequined jumpsuit, drawling, “Thank you, thank you verra much.” Instead, Luke Linsteadt, a bit shorter than the King himself, looks the least like the character he’s playing of the four. It’s a bold ploy. Even though Presley had signed with RCA Victor Records by this time, and had released his first huge hit, “Heartbreak Hotel,” he was little more than an adolescent and did not dominate the others.

Instead, director Weinstein dresses Linsteadt in black-and-white shoes and has him execute the herky-jerky dance steps that Presley later used for the 1957 movie Jailhouse Rock. Further, he’s the only one to show up with a luscious girlfriend, Dyanne (Dana Parker), who gives a welcome break from the all-boy vocals with Peggy Lee’s “Fever.”

The way the others are interpreted depends on how the Escott-Mutrux script presents them, rather than the way they are remembered in rock history. The most talkative character is the one we know least: Sam Phillips (Luke Darnell), the founder of the once-enterprising, now struggling Sun Records.

Phillips wants us to know how hard he struggled to give his musicians airtime at remote radio stations where even payola could not open the door. He cringes while telling us the studio that launched the legends was once an auto parts store and still looks it. Worse, just as his discoveries are coming into acclaim, they go and sign with big corporations, just as Presley has already done with RCA. A major tension of the script is determining what the others are going to do.

At the beginning of the action, the singer who has come to rehearse is Carl Perkins (tall James Bock), whose entourage of bass player Brother Jay (Michael Fittipaldi) and drummer Fluke (Bryan Graber) remain on stage throughout the intermission-less 100 minutes. As he has the least distinctive on-stage personality of the four, Perkins is harder to play, but his musical significance is never short-changed. His best-known hit “Blue Suede Shoes” opens the show.

Perkins is also allowed to complain that an auto accident prevented him from getting to New York City, so that Presley’s cover of “Blue Suede Shoes” appeared first on the then all-important Ed Sullivan Show. Bock, a considerable vocalist, gives Perkins his due in two distinctive solos, “Matchbox” and “Who Do You Love?”

If Perkins started by owning the session at Sun Records, Jerry Lee Lewis (Noel Carey) is the upstart in suspenders and ill-fitting pants who interrupts him. This alone gives Carey’s Lewis a sharp dramatic advantage, enlarged by Carey’s ability to hammer the keyboard as if he were firing an AK-47. Even at rest Carey’s Lewis looks as though he is demonically possessed by, well, great balls of fire that could leap out of his curly blond hair and consume the entire studio. Even the solos we barely remember from the past, like “Real Wild Child,” knock you out of your seat.

All this ebullience is a disadvantage to the laid-back man in black, Johnny Cash (Justin Figueroa), the quietest of the four. Figueroa, seen here in a high black pompadour, is the production’s most skilled imitator with an instantly recognizable voice, both in speech and in song. “Folsom Prison Blues” might be his, but “Sixteen Tons” is a cover for Tennessee Ernie Ford.

Once the tensions are resolved, Million Dollar Quartet dispenses with words and just delivers hit after hit. Music director Julian Reeve ensures hot vintage rock‘n’roll throughout, all of which is performed by the talented actors on stage.