Suspended for Life: The Road to Unemployment, Crime, and Death

If you’ve ever seen Twiggy Billue speak at a meeting of the Syracuse Board of Education, you know that the diminutive and vocal activist is full of passion about children. If you read her recent self-published book, Suspended for Life: The Road to Unemployment, Crime, and Death, you may start to understand why she feels so strongly about the dangers of profiling poor students, especially African-American males … even more so if those students have been labeled with disabilities. 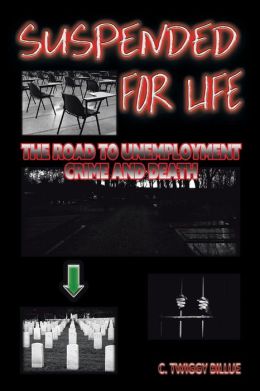 The cover of Twiggy Billue’s book. The book can be purchased on Amazon for $19.99.

Part memoir and part handbook, the book describes what Billue calls getting caught in the “whirlwind” of an educational system that she says railroads minority students and condemns them to a life on the streets, in prison or worse. Her response is to become a whirlwind of advocacy, and the book, written through the lens of her experience, offers parents information about the law and their legal options if they feel their child’s educational opportunities are being limited.

Though her children are grown, Billue speaks primarily as a mother, beginning with her story of how a Syracuse hospital tried to persuade her to abort her first son midterm, after what she says was a mistaken diagnosis of spina bifida. A self-described conspiracy theorist (she also describes herself as a pit bull and a lioness), Billue offers this highly personal tale as evidence of a war on minority children. Billue later became an activist in the early 1990s efforts to deal with infant mortality on the South Side, which exceeded levels at the time in developing nations.

She tells the story of a school-age son, who had a habit of rocking in his seat, being sent for evaluation for ADHD, ADD and autism after the behavior that she had seen as normal was judged as disrespectful by a teacher, a judgement Billue saw as racist. The book details her family’s battles through the system, along the way offering a tutorial for other parents and guardians. (The book even offers templates for letters that parents might need to write to school officials.)

Suspended for Life is not an academic discussion of the problem of suspension and student behavior. It is a shout out from the trenches, written for the people she sees as most affected. Billue isn’t as concerned with blatant racist acts such as the recent episode where a student with special needs was asked by a hall monitor to assume the frisk position for a family photo (the man was later dismissed). She spends most of her energy calling out teachers and administrators both black and white for the many subtle ways she sees them prejudging children based on behavior.

Suspension of students of color and with disabilities became a central issue for the Syracuse school district this year as a series of reports and the state’s Attorney General criticized the district for its disproportionate use of suspension to discipline black students. Billue appeared frequently at board meetings and public forums discussing the suspension rates and the recently revised Code of Conduct for students in the city schools. In the book, she details the findings of UCLA’s Daniel Losen, focusing, for much of the narrative, on her own role in bringing these to public attention.

Her habit of rarely naming names (many teachers, coaches and administrators are referred to only by their first initial) makes verifying many of the episodes chronicled in the book impossible. Billue writes of experiences going back to the early 1990s which sound like they could have happened yesterday.

Here are some excerpts from the book, which can be purchased at Amazon.com:

“The same old Jim Crow tactics that were used in the sixties were still being used … (suspension) is now an overt systemic institutionalized practice designed to push out African American students — a whirlwind with the speed and force of a freight train heading straight for your children.”

“From 1994 until the present (2013), war has been waged against African-American students and their parents, especially students with different abilities. The only thing absent is that they do not know a war has been waged using suspensions as a weapon to push out or warehouse their children.”

“The plot to destroy African-American children is a real conspiracy. … The force of the wind pushing our children out of the educational system is at epidemic proportions.”