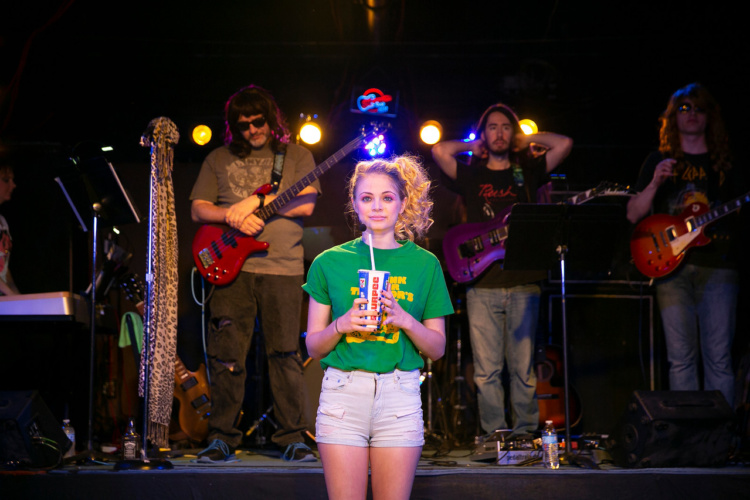 Jukebox musicals allow fans to revisit the past without mawkish nostalgia or sneering camp. Chris D’Arienzo’s cleverly put-together Rock of Ages, which runs through July 28 at the Central New York Playhouse in Shoppingtown, celebrates the music of the 1980s, especially acts like Styx, Twisted Sister and Pat Benatar.

The set swarms with artifacts that disappeared decades ago, like boom boxes bigger than a man’s head and men’s hair bigger than a boom box, but the music does not feel like it ever went away. Indeed, it did not.

D’Arienzo is ahead of rival compilers on several counts. Nearly every song is a familiar hit; he never has to rely on an obscurity to fill in a rough patch. Although all the music was composed by different people for different occasions, he stitches them seamlessly into a many-layered, complex plot, not all of which can be relayed here.

For forgetful audience members or those from outside the 1980s-era market niche, director Dan Rowlands’ helpful program supplies all the missing data. The last of 23 numbers, the booming finale for Journey’s “Don’t Stop Believin’,” is arguably the best-known of any from the decade.

Rowlands, long known as one of the most innovative directors at Central New York Playhouse (such as Macbeth done as The Godfather), surprises by having some players appear against type and finds newcomers for tricky, demanding roles. He has a useful ally in producer Kathy Burke Egloff, and a strong team with music director Abel Searor, choreographer Sami Conter Hoerner and costumer Kate Kisselstein.

An angelic petite blonde, Sherrie Christian (Hali Greenhouse), arrives in Los Angeles, hoping to make it big in acting. She meets an aspiring rocker, Drew Boley (Tyler Ianuzi), now a busboy at the Bourbon Room on the Sunset Strip. Through several turns of fate and crowded dramatic action, they are the leads. While both Greenhouse and Ianuzi are widely experienced in both musical and dramatic roles, neither has been a lead before or displayed such considerable musical chops, especially in their second-act duet, “Oh Sherrie.”

The Bourbon Room belongs to longtressed Dennis Dupree. Christopher James Lupia is almost unrecognizable in the role, but reveals a considerable, previously unheard singing voice. The boss is assisted by Lonny Barnett (Josh Taylor), who also breaks through the fourth wall, serving as narrator. In a heavy black wig, Taylor, a gifted scene-stealer, sometimes feels like the lead.

Look for the exploitive visiting star Stacee Jaxx (Derek Potocki, a departure from all previous performances) and the villainous German developers (Eric Feldstein and Cole LaVenture) who want to tear down the block. Plucky neighborhood organizer Regina (Sabrina Becker) fights back. After Sherrie is misused by Stacee, she is reduced to stripping at the nearby Venus Club, run by big-hearted Justice (Kristina Abbott).

The original Broadway run of Rock of Ages, the 28th longest in history, ended in 2015. It’s strange that our first community theater production, a heart-pounding crowd-pleaser, comes only now.