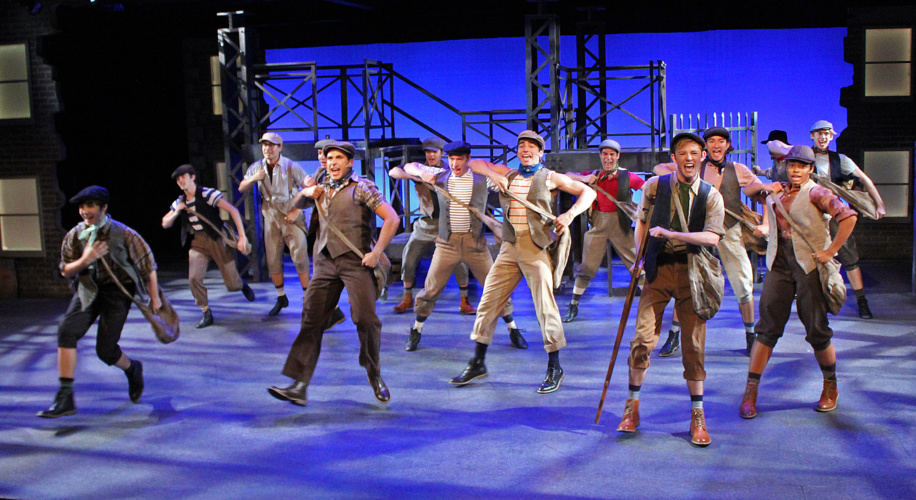 Getting the flop Walt Disney film Newsies (1992) on the musical stage was a two-decade-long struggle for prolific composer Alan Menken. Although often placed in the Disney stable, Menken, who also wrote Little Shop of Horrors, contains multitudes. His musical numbers in Newsies gave him a personal investment, and after its initial disappointment he was encouraged that it drew large numbers of fans during the glory days of VHS video rentals.

So Menken enlisted play doctor Harvey Fierstein (Kinky Boots) and choreographer Christopher Gattelli to produce Newsies: The Musical in 2012, and it ran on Broadway for 1,004 performances. The show makes its area premiere at Cortland Repertory Theatre, where it runs through July 28.

The Disney imprint assures audiences that Newsies is family-friendly, but the gritty, honest portrayal of the newsboys’ strike in the summer of 1899 will speak to many adults. Despite the clean necks and evidence of orthodontics, the large, youthful male chorus accurately portrays the economic desperation that sent the boys out on the streets in the first place and then to find the backbone to fight one of the most powerful men in the country: Joseph Pulitzer (Woody Minshew). It feels like a movie plot but it actually happened, with other historical figures like Gov. Teddy Roosevelt (Dana White Jr.) playing parts.

Officially, the newsies were independent contractors, not employees, of Pulitzer’s New York World newspaper. Nascent labor unions had nothing to do with them. They were on their own, and just poor kids, some orphaned and homeless.

In the first scene, clear-voiced Jack Kelly (Zack Zaromatidis) emerges as a natural but nuanced spokesman, who greets other kids joining in. He observes that limping Crutchie (Camden Garcia) will have an advantage in selling. Far from spoiling for a fight, he yearns to break away from the city in his first number, “Santa Fe,” retained from the movie. He is at ease with women and paints backdrops for buxom vaudevillian Medda Larkin (Kennedy Salters), who has musical numbers of her own, such as “That’s Rich.” He also flirts with a female reporter, Katherine Plumber (a splendid Katie Luke), for the rival New York Sun.

The strike begins when Pulitzer raises the price the boys must pay for the papers, squeezing the newsies to the limit. Jack rises to the occasion with “The World Will Know,” and Katherine is there is to publicize him and the strike. But Jack’s commitment falters and the leadership falls to his pal Davey (Braden Phillips), who rallies the boys with “Seize the Day,” another song retained from the movie and the most memorable in the show.

Newsies: The Musical turns out to be primarily a dance show, just as much as 42nd Street. The original choreography won a Tony Award, most understandably. Matthew Couvillon, memorable for his work for Cortland Repertory’s A Chorus Line (July 2016), recreates that here. No other male chorus, not the Jets or Sharks or the Washington Senators, has expressed such high testosterone energy of righteous guys yearning for justice.

This much male talent is hard to assemble. This powerful show, directed by Mark Reynolds, is unlikely to be seen again soon.