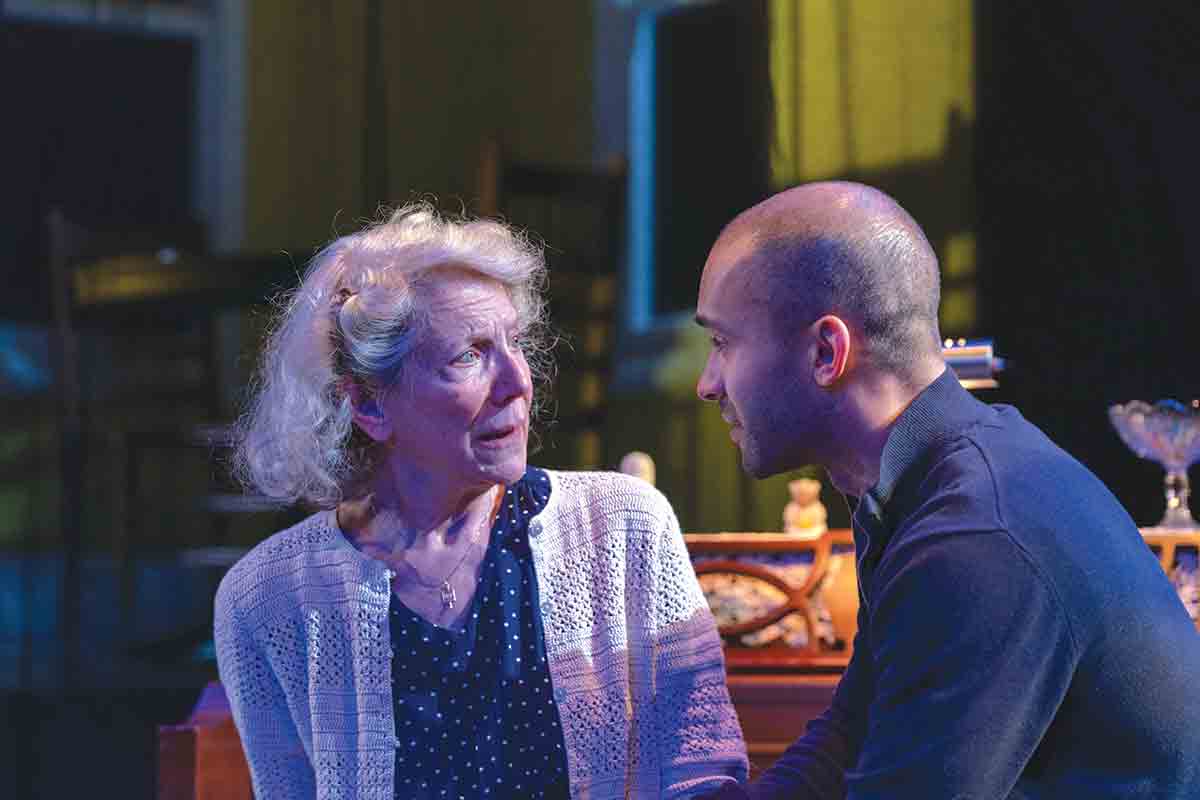 Psychological thrills are resurrected from a character’s haunted past in The Piano Teacher, running through Sunday, Nov. 4, at Ithaca’s Kitchen Theatre. “He hated children: That’s why we didn’t have any,” says Mrs. K, the title character in Julia Cho’s drama. Mrs. K (played by Beth Dixon) is speaking of her late husband, whose name is never given; they were married 36 years, and he’s been dead for some time.

In Mrs. K’s rambling but obviously needy opening monologue, she breaks through the fourth wall to offer the audience some cookies. A guy in the first row accepts. These are all devices to disarm us from preparing for the shocking secrets to be revealed.

In an empty boast about her former students (one won a geography bee), we notice that not one is a musician. So what happened to all those pupils after all these years, she wonders. What lessons did they take from her? She begins to call, using one of those sturdy, once ubiquitous Western Electric tabletop cradles, upon which the phone itself can be slammed in disgust.

Her first attempt reaches a somewhat distracted Mary Fields (Amelia Windom), who is amiable enough but holds back a greater emotion. When coaxed she agrees to come for a visit.

Subsequent calls veer into the ugly, from rude responses to hang-ups. At last the veneer of the bland teacher from the “suburb among suburbs” is punctured and she lets loose with the four-syllabled m-bomb. In shame, Mrs. K puts her hand to her mouth and asks, “What would my husband say if he heard that?”

Her second student, the insinuating, snarly Michael (Matthew J. Harris), might not have needed a call. Was he waiting in a car across the street? A close observer, he tells Mrs. K what she had been struggling to forget.

When The Piano Teacher opened off-Broadway in 2007, playing the role of Mrs. K won a host of plaudits for Elizabeth Franz, who has also been a Syracuse Stage favorite. Mrs. K has perhaps 80 percent of the lines, travels the longest arc, and carries the most emotional weight.

For the Kitchen show, Beth Dixon brings a lengthy list of credits, including Broadway. Yet as craftily directed by Diego Arciniegas, she speaks so rapidly and softly we can barely catch the details. Emily Woods Hogue’s costuming puts Mrs. K in a baggy, rayon housedress, possibly purchased during the Carter administration. Experienced playgoers know that this is like exposition at the beginning of an Agatha Christie mystery, deliberately unemphatic. One of these banal items will rise up to bite.