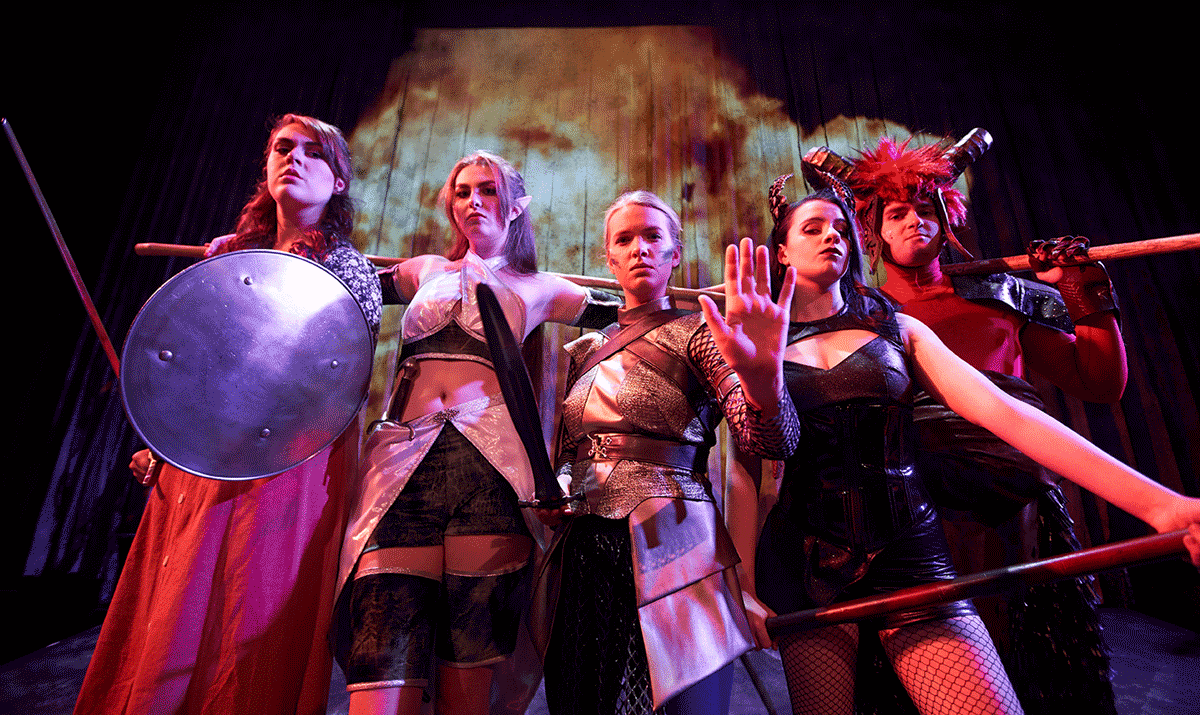 Follow Agnes down a new-age rabbit hole as she falls into a world of Dungeons & Dragons, trying to reconnect with the memories of her younger sister.

Surprises are more abundant than shocks for She Kills Monsters, performed by Le Moyne College students in a Boot and Buskin Drama Club production (running through Saturday, Nov. 3).

In his curtain speech, director and theater program head Matt Chiorini announced that Qui Nguyen’s She Kills Monsters is far and away the biggest production of the 19 he has overseen since arriving at Le Moyne. Costumer Lindsey Voorhees and set designer Karel Blakeley have conjured up waves of eye-catching surprises, but just how big Monsters is does not become evident until the last 15 minutes. More importantly, Monsters connects local audiences with the edgy, New York City contemporary theater scene as no other company has.

Vietnamese American Qui Nguyen is playwright-in-residence with Brooklyn’s ultra-hip Vampire Cowboys, the company that helped produce She Kills Monsters at TriBeCa’s Flea Theater in 2011. The “monsters” of the title are a tip-off to the play’s nominal subject, Dungeons and Dragons and role-playing with mythical identities.

Unusual for any college production, the show’s program includes a color insert with advertisements for local entrepreneurs and clubs. Admittedly, audience members who arrive with the D&D definition of “module” in mind begin with advantages of those who do not. But that’s a little like saying Anglo-Catholics begin with an advantage on the Narnia stories. You can enter without joining.

The principal character in Monsters is the drab-looking teacher Agnes (Meghan Lees, dressed to look older), who probes the notebooks of her recently deceased 15-year-old sister Tilly (Megan Hill), who was killed in a car crash. As a D&D player, Tilly had created an alternative role as Tillius the Paladin, appearing in an alluring costume. Uninitiated, Agnes always wears the same costume as she enters into the fantastical. Agnes’ initial A is more important than her name itself because it links her to Lewis Carroll’s Alice, as she goes down a rabbit hole and through a looking glass at the same time.

The time is the pre-digital year of 1995, and the setting is Athens, Ohio. Because Athens is an ancient name with mythological links, we can forget that the town is the seat of Ohio University. And Ohio is the state most associated with normality; think Bye, Bye Birdie.