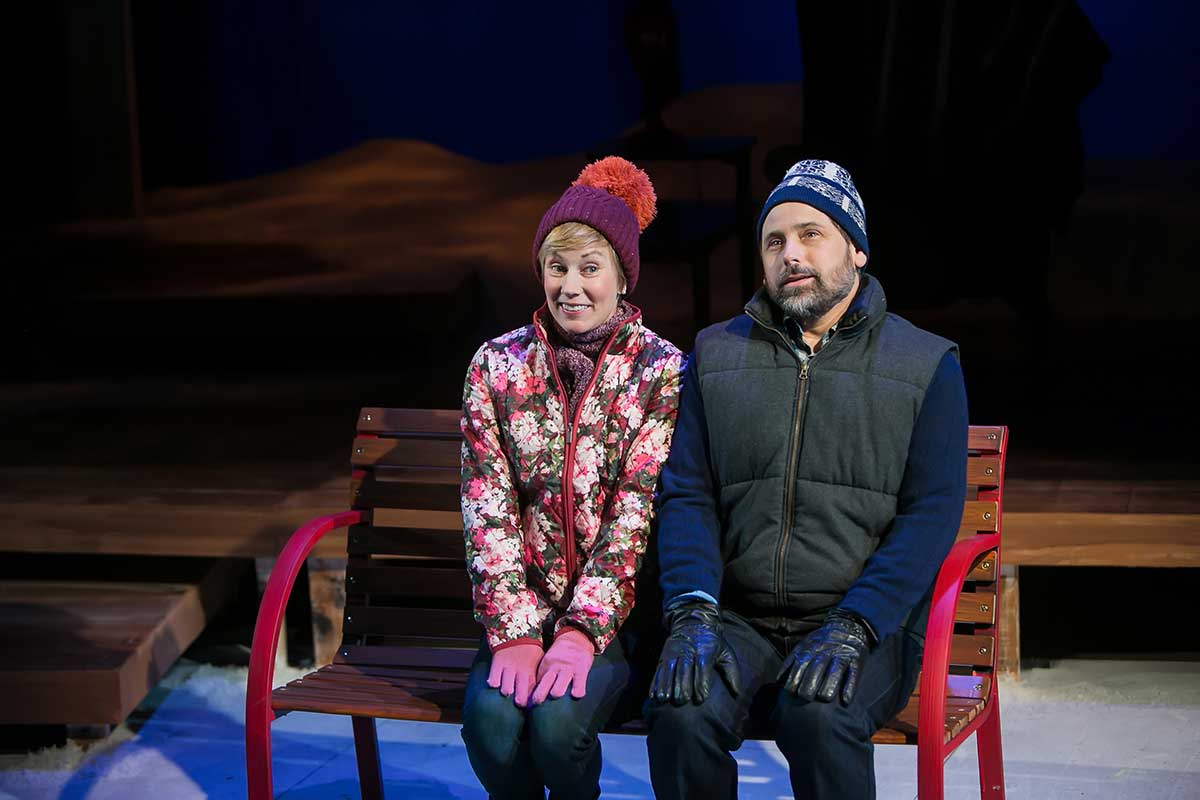 In a rural, nowhere town in Maine, love tries to flourish. Your heart goes out to them, thanks to veteran and newbie players alike.

The teasing comma in the title of the episodic comedy Almost, Maine (through Saturday, Feb. 2, at the Redhouse Arts Center) hints at just some of the show’s wordplay. As one of the characters explains, the area is unincorporated in the far north of the state, known for potatoes, not lobsters. If the locals had had their act together, they would have incorporated and been bestowed with a name, and they almost made it.

Playwright John Cariani was raised in Presque Isle, an actual town in the same part of the state. He went off to a fancy college and then made a name for himself on television and Broadway. He portrays the snow-covered boonies both from within and without.

The 13-year production history of Almost, Maine is a case study in the chasm between taste-makers in Gotham and those of us in the rest of the country. When the show opened off-Broadway in January 2006, major newspapers groaned, and it ran for exactly one month. Shortly afterward it caught fire in regional theaters and has been blazing ever since.

In 2017-2018 it was the most frequently performed show in American high schools, beating out A Midsummer Night’s Dream. But none of the characters are kids, and the quicksilver shifts in tone from absurdity to pathos call for professional delivery. It’s been nine years since Syracuse Stage produced it in March 2010, and it’s high time for a revival.

The current Redhouse mounting in the smaller (140-seat) Bill & Penny Allyn Auditorium merges the talents of longtime company favorites with new faces. Director Steve Hayes, well-remembered for flamboyant leads in Hairspray and La Cage aux Folles, signaled his tone in handling this material with his 2018 autobiographical show Raised by Warner Brothers, Born in Syracuse. At bottom, he’s a local. Thus while some of the characters may border on types, like beer-drinking ice fishermen or overdressed snowmobilers, Hayes never condescends.

Related: Mash notes on the end of another year in local theater

The first sketch, “Her Heart,” demonstrates how this will work, with a touch of magical realism. Glory (Lilli Komurek) wanders without a map in hopes of getting a prime view of the Northern Lights. This takes her to the front yard of the unsuspecting repairman East (fiercely bearded newcomer Basil Allen). Assuming that the locals should be willing bit-players in her fantasy, she gives no thought to trespassing. Instead, East intuits her needfulness and gives her a big kiss, throwing her back on her heels.

Then Glory reveals her baggage: a small sack containing her broken heart. Before he died, her cheating husband broke the thing, leaving her with shards. The artificial device in her chest leaves her unable to return anyone’s love.

All the vignettes turn on the characters’ need for love and their difficulty in expressing it. That East, the repairman, takes on Glory’s need may have been too sweet for Manhattan critics. But not all the sketches come with happy endings.

Komurek and Allen are paired again as Marci and Phil, an old married couple, in “Where It Went.” Marci has lost her shoe after skating, and Phil is unable to aid her as she helplessly rubs her freezing toes. The loss may not be Phil’s fault, but his inability to find the words is colder than the snow.

Failure to speak mark two of the sketches with Redhouse veterans Laura Austin and John Bixler. In the prologue, Ginette’s declaration of love is received poorly by Pete, who does not feel they are really so close. He compares them to the rounded surface of a snowball. But he continues to hold the snowball to reconsider the haste of his response.

There is anything but haste in arguably the most poignant sketch, in which Hope, a big-city sophisticate, takes a 168-mile taxi ride from Bangor to visit the door of the long-ago suitor who had proposed marriage. She never answered, for which she now feels shame as well as regret, and would like to rewrite history. Austin’s Hope is driven by her own need and cannot comprehend the hurt her indifference might have visited upon a townie left behind that she no longer recognizes.

Sex might be related to love but it has the advantage of being a more reliable springboard to comedy. In the most raucous sketch, “They Fall,” Randy (John Bixler) and Chad (Derek Powell) lament the ill treatment they have suffered at the hands of certain ladies and admit that they really prefer each other’s company. Fearful of a Brokeback Mountain, they literally cannot stand up to the temptation.

Powell is back, swathed in layers of parka, as Dave in “Seeing the Thing,” trying to make a move on plywood factory worker and arm-wrestling champion Rhonda (Alyssa Ashley Otoski-Keim), a fellow snowmobiler. When he presents her with a painting he’s done for her, she thinks it’s road kill. She admits to being reluctant to show her feminine side, perhaps because she’s overdressed. Thus begins a G-rated striptease which gets the two of them down to red long-johns.

Marie Yokoyama’s subtle lighting design reminds us that most action in Almost, Maine, whether heartwarming or heartbreaking, takes place at 9 p.m., just enough to see a snowball or the Northern Lights.