Maria Vallese, the artist behind the brand Retro Sorrento, likes to paint a sense of place. Iconic buildings and iconography are her calling, and the most common focus of her watercolor works.

A print of the Westcott Theater shows the building popping with vibrant splashes of cool turquoise and plum, its curvy-fonted marquee glowing a bright, warm yellow. The contrasting, blotted watercolors gives the piece a sense of movement and vigor, not unlike the alternative, edgier music concerts frequently booked at the music venue.

Other prints show rounded, retro camper vans and converted station wagons, inked in fine lines over circles of the iconic soft watercolors. They come in stickers, magnets and 2019 calendars. Vallese is also working on a print of Syracuse’s Dinosaur Bar-B-Que — another beloved venue with a notable marquee, one of Vallese’s personal preferences when looking for subjects (brick facades and unique details are other pluses).

“If you’re drawing a building, those little subtleties and things you accentuate with color and distortion allow you to make the place feel how it makes you feel,” Vallese said.

Vallese didn’t always have this oversaturated, psychedelic style. It was born out of a soul-searching trip to New York City, where she took more pictures of buildings and doorways than she did of herself or her friends. After producing an artwork series recreating them as paintings, she continued to gravitate toward subjects that evoked nostalgia. And what says “home sweet home” better than a familiar skyline or favorite hangout?

The pieces are first sketched out in pencil and finalized in ink. On separate paper, Vallese spreads and blots a watercolor wash to map out what the final product will look like. The two are scanned and combined digitally, where she makes her fine-tuning: restricting the color bleeds, playing with layering, experimenting with saturation.

“With digital work, the technology is so far that it still looks like your hand,” she said. “Ten years ago I would have said no to it, because it looked more like the computer’s work than the artist’s.”

Vallese, who works out of a studio in Clinton, began her art journey at a young age with her grandmother. Where other children made stick figures and lopsided smiley faces, Vallese’s grandmother had her practicing still life and realism.

“Instead of coloring, she’d teach me to draw a mug,” Vallese recalled. “She treated me as an adult and was teaching me how to draw like an adult.”

Art quickly bled into other avenues of her life. She remembered going on family camping trips and taking off her shoes to stand in the middle of the nearby creek, stretching so she could get the perfect angle for a reference picture for painting. 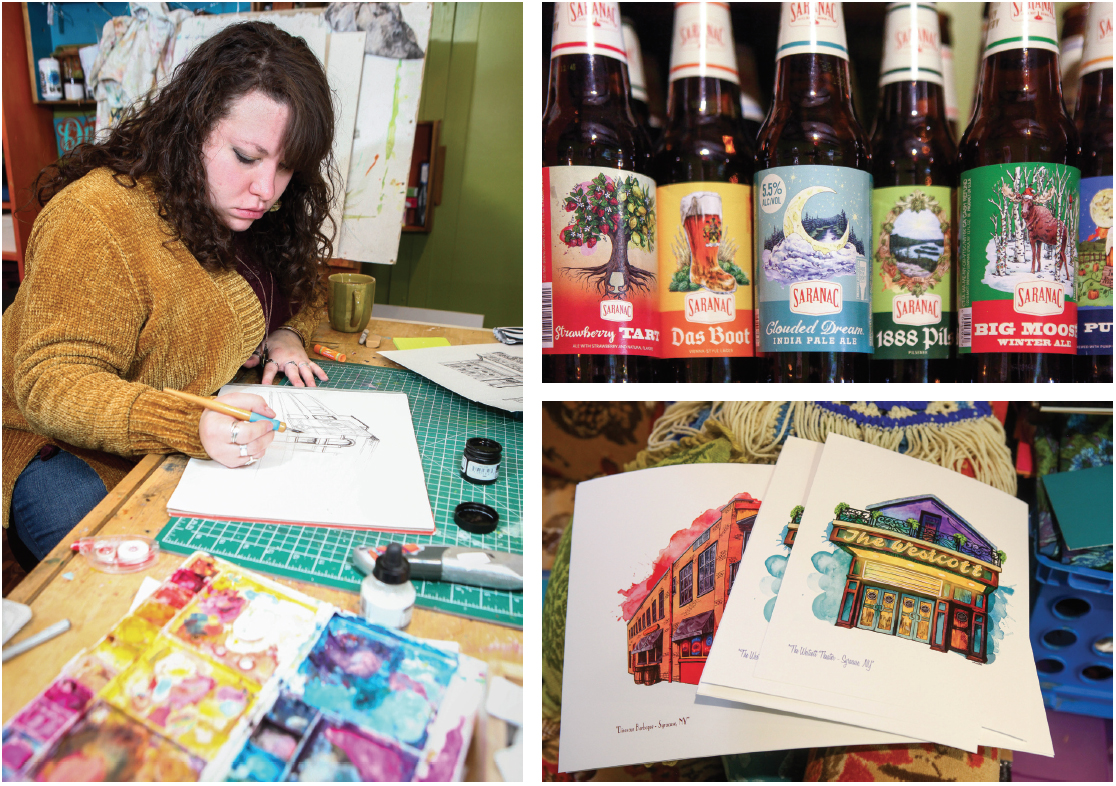 Clockwise from left: Maria Vallese, owner of Retro Sorrento, combines traditional and digital techniques to perfect her stylized images; the Saranac Brewery is one of her most iconic customers; these two businesses should be familiar to Syracuse locals. (Michael Davis/Syracuse New Times)

In school, art class was one of the few areas that required her to push her own boundaries. “It was the only thing I could do for hours on end. I was probably a flake to a lot of my friends growing up because I’d be drawing and painting,” she said. That led to classes at the Munson-Williams-Proctor Arts Institute and an application to the Rochester Institute of Technology, where she graduated from in 2010.

When it was time to set out on her own, she immediately saw the hardships of portfolio work and pitching to art directors, especially with the economy still recovering from the 2008 recession. She quickly pivoted to independent work, merging her professional Maria Vallese Illustration persona with her Etsy shop, Retro Sorrento — a throwback to her childhood nickname mixed with her own lifestyle flair.

Craft fairs and gallery work soon became relaxed networking opportunities. Favorable word of mouth was another plus, as well as landing some noteworthy venues, such as several pieces in places like the Greater Utica Chamber of Commerce.

“You get people who are already in the creative field or have their own businesses, and they’re looking to support other local businesses,” Vallese said. “I think seeing a person selling their artwork and making a go at creating a business gives you a bit more of an establishment when you’re networking.”

Vallese’s artwork now graces one of Utica’s biggest claims to fame: Saranac beer. Vallese does all of their illustrated packaging, from the Adirondack-themed images on their core line to the more exclusive trippy hops and beer-king playing cards that adorn some of the Inner Circle Series brews.

A recent summertime partnership saw her work with the budding Made in Utica, as she created a special mug and matching mural for Handshake City. The pop-up styled outdoor space was created by community members banding together to transform an abandoned lot into an urban park/market for artist work, craft fairs, music series and other ventures.

One of the gutted shipping containers that marks the boundaries of the area is covered in Vallese’s hand, with an etchy central logo surrounded by other stylized icons of the Rust Belt city, all on turquoise and goldenrod sun rays, reminiscent of downtown Utica’s iconic sun mural at Genesee and Lafayette streets.

With hubs in Utica and her college hometown of Rochester, Vallese said it made sense to begin branching out to Syracuse. She often traveled here for the music scene (thus her draw to the Westcott) and to buy art supplies.

When Wildflowers Armory opened in downtown Syracuse, it created the perfect mini-venue to begin dipping her toes into the new market. As she wraps up other business projects in Utica, she said she hopes to create more iconic pieces for the Salt City.

Works by Retro Sorrento can be purchased online at retrosorrento.com or her Etsy page. You can also follow Vallese on instagram at @retrosorrento.

Review | Exploring affairs of the heart in ‘Almost, Maine’
From Ceramics To Cows: 4 artists display works at Edgewood Gallery
To Top