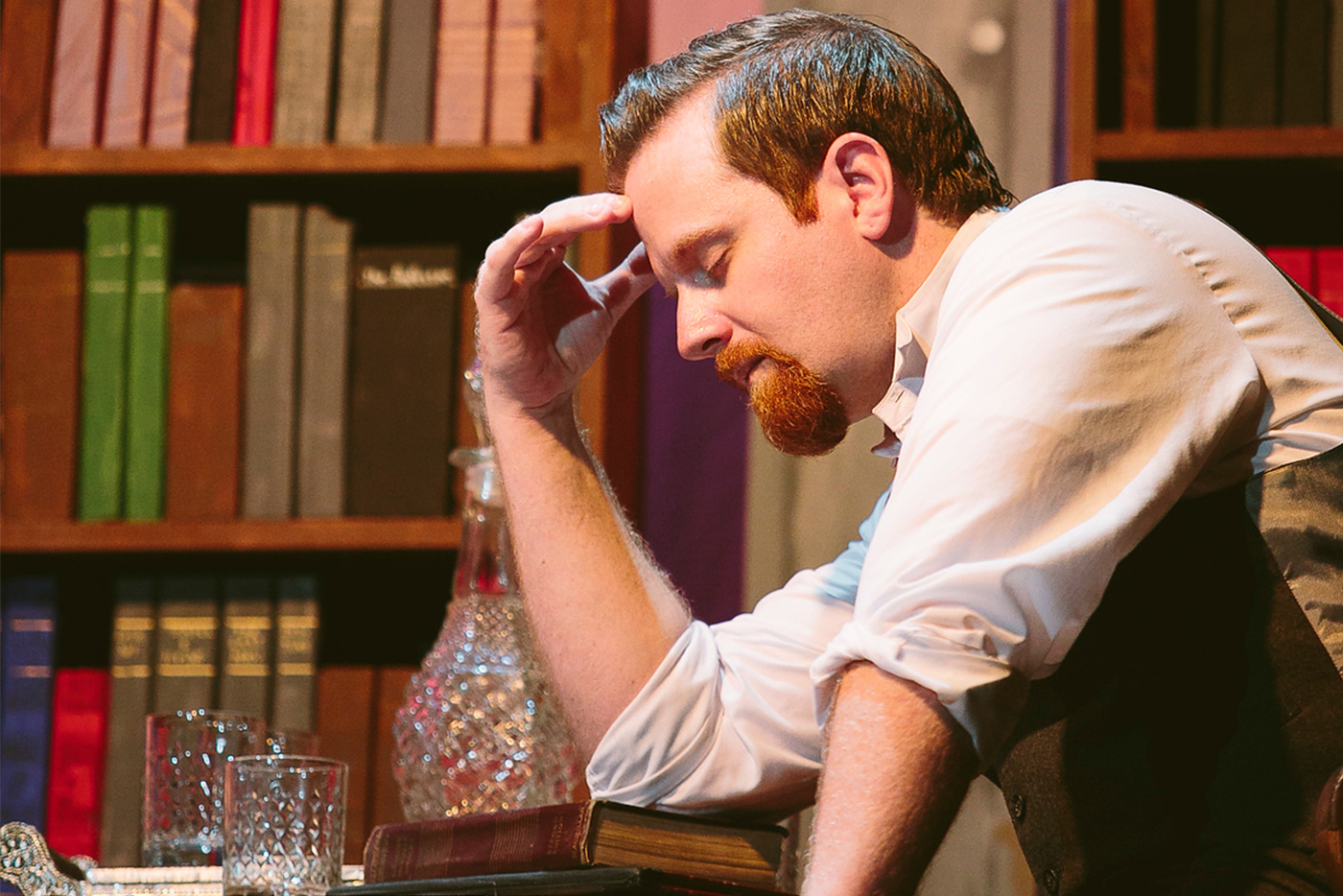 The curious tale of “The Elephant Man” is told at the Baldwinsville Theatre Guild.

We know that the phenomenally misshapen John Merrick actually existed in 1880s London because dozens of photographs survive, and his twisted skeleton was preserved for science. Merrick was one of our fellow mortals who, through random fate, found himself first ostracized and later exploited in sideshows.

Are we tempted to feel that he is an exaggeration of our worst fears about ourselves that make us “different,” our neuroses, our ethnicity, or sexual styles? Such questions are very much the point of Bernard Pomerance’s stage play The Elephant Man now in a well-appointed revival that runs through Oct. 8 at the Baldwinsville Theatre Guild.

The Pomerance drama has held up better, in part because it calls for three outstanding performances. In the play Merrick wears no prosthetic and appears often in his shorts and barefoot. A half-dozen stars have fought to take the role, including Mark Hamill, Billy Crudup and David Bowie. Bradley Cooper’s Broadway revival in 2014 earned him a Tony Award nomination.

We first see the Elephant Man (Alan Stillman) through the eyes of benign Dr. Frederick Treves (Benjamin Sills), a young man destined to rise in society. Treves must always contend with a severe administrator, Carr-Gomm (a precise Simon Moody), a man of science who imposes limits. Treves seeks to rescue Merrick from freak shows, first in London’s shabby Whitechapel, and more alarmingly in Brussels, where he’s grouped with the singing, misshapen Pinhead girls (Jaclyn Matthews, Korrie Taylor and Beverly Poznoski).

Treves arranges to have Merrick housed in a London hospital. After Carr-Gomm gets a letter describing the case printed in The Times describing the case, authorities raise funds to allow the Elephant Man to stay on indefinitely so that Treves may study him. The hope is that Merrick might lead a life resembling the normal. Progress is not smooth. One nurse (Beverly Poznoski) boasts that she has taken care of lepers in Africa and can deal with any challenge, but recoils in horror when she sees the patient in a bathtub.

Unexpectedly, Merrick becomes a celebrity attraction, prodded in part by Treves’ rising status as physician to the prince of Wales. Princesses and duchesses want to be seen with Merrick. Perhaps this is a posh variation on his former role in the freak show, as his one-time handler Ross (Simon Moody, again) complains. Bishop How (Daniel Bostick) declares that the Elephant Man is a “true Christian” and much like him. Most visitors affect to see themselves in Merrick. But the most intriguing visitor is a glamorous woman from the theater, Mrs. Madge Kendal (Binaifer Dabu). As a trained actress, she restrains her instinctive revulsion and befriends Merrick, speaking of literature and love, something he deeply craves, specifically, Romeo and Juliet.

When Mrs. Kendal brings him a model of St. Phillip’s Church, he works on it with his good hand, saying it is an “imitation of grace.” Treves responds that all of humanity is a mere illusion of heaven, to which Merrick answers that God should have used both hands.

Merrick’s complaint that he will not only not know love or the perfection of the female form leads to a tender, heartbreaking nude scene that will surely cause comment, which should be favorable. Director William Edward White achieves dramatic poignancy without titillation.

For longtime supporting player Alan Stillman, Merrick is the role of a career. Even without makeup and very few clothes, he’s almost unrecognizable. The limitations of his twisted face and crippled limbs mean that all emotions must be understated, creating much with little. Binaifer Dabu, one of our most versatile players, has never looked grander than in costume designer Kate Kisselstein’s gowns. Benjamin Sills’ Treves is the good doctor who does not always have our affection.

Getting Pomerance’s The Elephant Man on stage has been a decades-long labor of love for director White. Some of this is evident in the props he has assembled: pictures of the historical Elephant Man, his skeleton, an actual model of St. Phillip’s, and 21 scene titles written in a Victorian hand. Navroz Dabu’s sets and the Kisselstein costumes make The Elephant Man one of the best-looking Baldwinsville Theatre Guild productions ever.