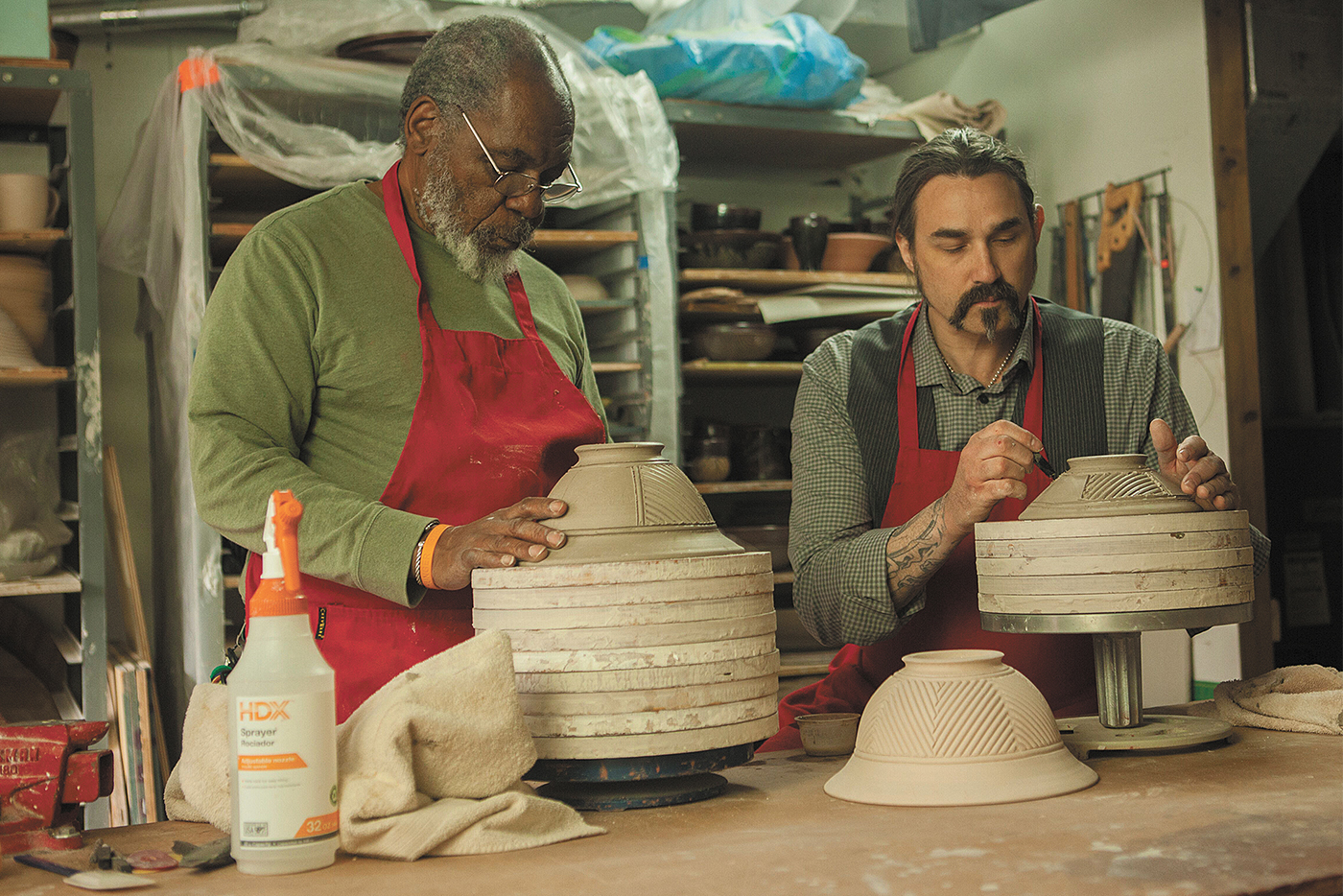 Ceramist David MacDonald isn’t a product of the adage claiming all good things come to those who wait. His well-known work, inspired from African artistry, can be seen at the Everson Museum of Art and purchased at Eureka Crafts.

The soft-spoken retired Syracuse University professor will be featured in the first episode of the PBS series A Craftsman’s Legacy, which begins its third season this week. The half-hour program airs Saturday, Nov. 26, 3 p.m., on WCNY-Channel 24.

The hands-on artist is an example of what happens when a person stays humble while pursuing a passion. Some may confuse this with karma, but it comes down to hard work, discipline and persistence.

“There is a kind of magic or alchemy when you work in ceramics, when you take a lump of clay, which has no intrinsic value, and you’re able to transform it into something that is not only beautiful,” said the self-described potter. “What I found to be the greatest revelation is that you could make things people could use. Utility has always been an important part of my artistic creation.”

Eric Gorges, the host of A Craftsman’s Legacy, actively pursues artists who are not afraid to get their hands dirty. Gorges, who manufactures custom motorcycles by trade, stopped by our neck of the woods to learn how to make pottery and glean information about the craft from MacDonald.

“The program will show footage of me showing him how to throw on the potter’s wheel, how to decorate and glazing,” MacDonald said. “It’s similar to a cooking show. There are various stages of the process to make a pot, to throw a pot and to have a finished pot. The normal process would take about a week-and-a-half or two weeks.”

MacDonald’s journey began at Virginia‘s Hampton University, which gave the young long-distance runner a scholarship for athletics. His goal was to become a painter, but it was a requirement to take a ceramics class when in the art education program. The experience was a blessing.

“It’s a very physical art: wedging clay, mixing clay, loading kilns,” MacDonald recalled. “It appealed to me more than painting, which is more cerebral. Ceramics are egalitarian. You can go to just about any culture with a bowl, and you won’t have to explain what it is or how to use it.”

The realization occurred sophomore year, when one classroom assignment involved creating a mug. Hours after it came out of the kiln, MacDonald kicked back with it, sipping a cup of instant coffee as he studied.

He studied under, and was inspired by, ceramic artist Joseph Gilliard. It was in that classroom where he got his first taste of the art, and his career path revealed itself. Before joining the faculty at Syracuse University in 1971, he received his Masters of Fine Arts from the University of Michigan.

“Syracuse was my first and only job,” MacDonald said with a smile. He retired in 2008, partly due to the physical demand of teaching and creating ceramic art. “I wanted to use the rest of the time that I have as efficiently as possible, making pottery. I reached a point where my body was telling me I was no longer 25 years old.”

He grew up in Hackensack, N.J., but never ventured too far north. “As far as I was concerned, I thought New York state ended somewhere around Yonkers,” MacDonald recalled. After graduating from high school in 1963, his undergraduate years were spent at Hampton during the civil rights movement. He was also the first person in his family to go to college, although his parents initially didn’t understand what he was studying.

MacDonald, the third of nine children, grew up in public housing. “When you’re living in public housing, your father doesn’t have a workshop in the basement or garage. Everything you needed — cups, dishes, etc. — you had to go to the store. They’re made by someone else.”

Going back to that mug he used for his coffee: MacDonald said he was initially skeptical about it. The thought of utilizing the item was almost unbelievable. “I made the cup of coffee, put my feet up on the table and I was hooked. At that moment I thought (the mug) was beautiful. In retrospect, it was probably hideous. But I made it and could use it.” When he brought his vessels home, he didn’t have to explain his work to his parents.

During the years of social upheaval, MacDonald wanted his art to express his personal struggles. “Every artist tries to achieve the ability to use their art to express something that’s important and personal. Out of that comes style,” MacDonald said.

The roots of his work focus on Afro-centric ideology. Due to the aesthetics of African pottery, his objective was to focus on surface decoration to individualize his work. MacDonald also pays homage to what he calls other “primal cultures”: Islamic, South American, Native American and East Asian, among others.

“For every idea you come up with, that particular idea generates 10 more,” MacDonald said. “There is never enough time to do them all. Since you’re always working on something, there comes a point where you decide what avenue you’re going to pursue. Sometimes it’s a dead end, and sometimes it’s not.”

MacDonald enjoyed his years as a teacher at SU, especially his interactions with students. “As a teacher you have the ability to experience that ‘a-ha!’ moment when they’ve been struggling for weeks, and then things start to click,” MacDonald said. “It’s similar to having the privilege of being there when your child takes his or her first step. It happens 20 times a semester, because of having 20 students in the classroom.”

Although MacDonald occasionally visits the university and talks to the students, he does enjoy the freedom of spending an entire day in his studio. He says there will be no way he could finish everything he’s considered, yet this is still the life to lead, pursuing his passion until his last breath. “It does become frustrating, but it’s exhilarating.”