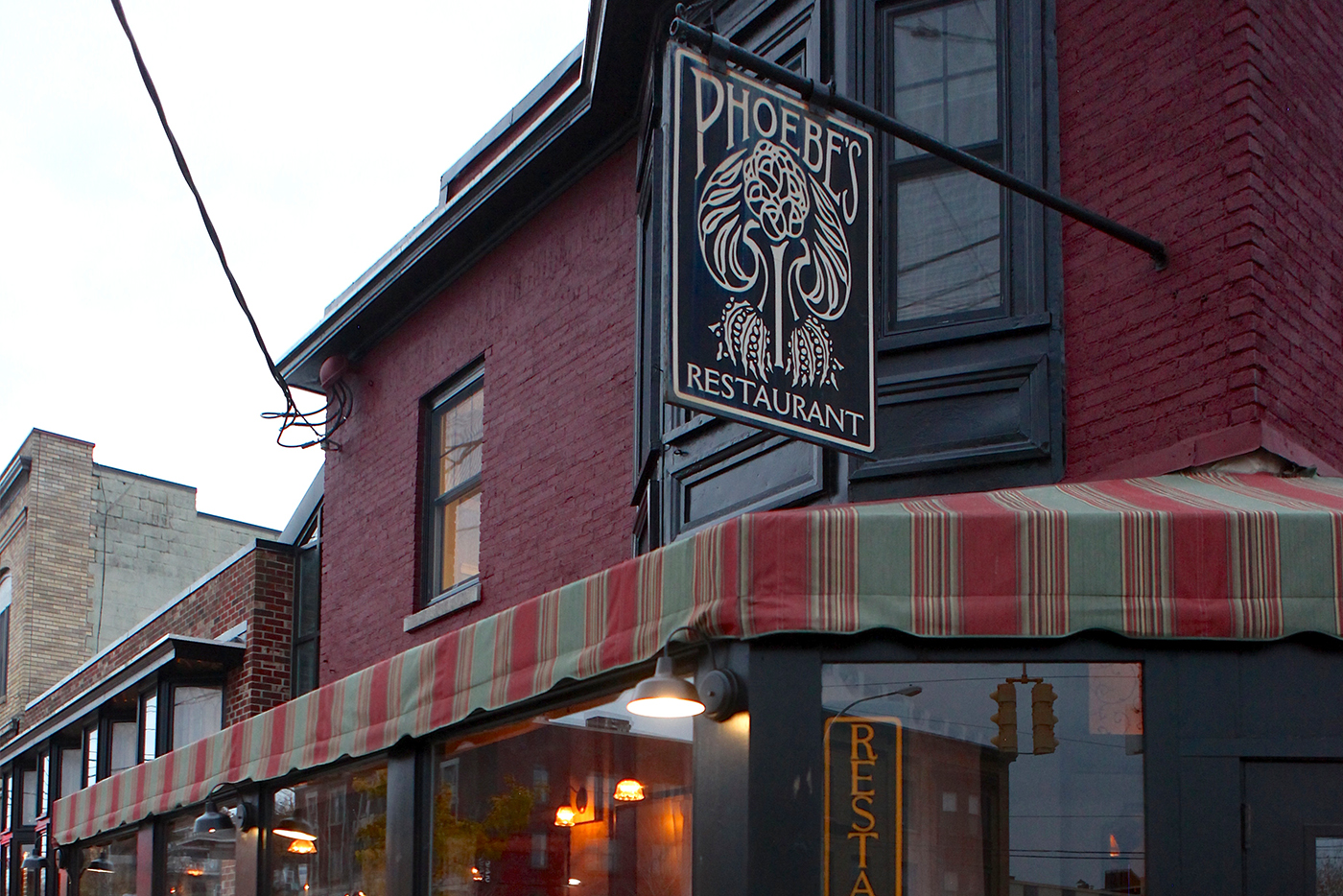 The classy restaurant marks four decades of fine dining, with quiche, burgers and French onion soup on the menu.

Where to begin? Ellen Leahy has so many vivid memories of Phoebe’s Garden Café, back in the day.

She remembers driving to New York City in a big, red truck with fellow manager Peter Lord to pick up kitchen equipment from a secondhand restaurant supply house in the Bowery. She remembers the kitchen crew washing and drying seven cases of spinach a day (gritty, ruffled spinach leaves — not the baby spinach so often used today) for the restaurant’s spinach salad with bacon and mushrooms. 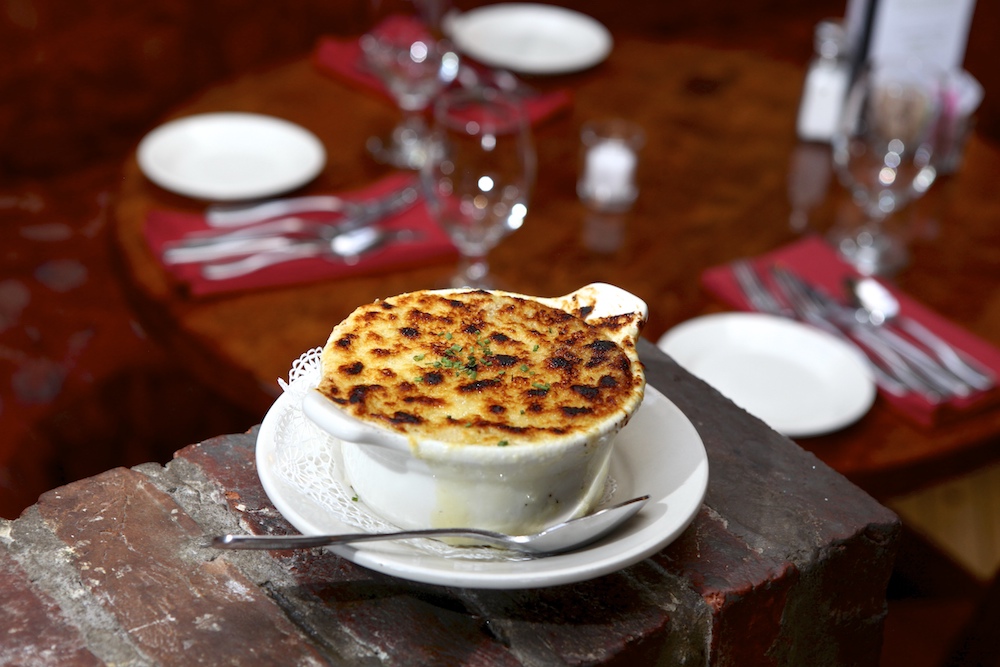 She remembers Dan Labeille, an authority on French cuisine, consulting on the menu and training the staff. She remembers the French onion soup gratinee, the deep-dish quiche and the sauté station with its battery of pans at the ready for a popular menu item, sole served four ways.

She remembers a hopping bar packed with local movers and shakers and “people of every stripe,’’ including women, who felt welcome and comfortable at the bar — something we take for granted in 2016. She remembers the adrenaline rush that comes with serving 300 lunches and 300 dinners during the week, and 500 to 600 dinners on weekends.

“It was really exciting. It was sort of like the Dinosaur Bar-B-Que of its time,’’ says Leahy, a veteran of the restaurant business in Central New York who got her start at the Sherwood Inn in Skaneateles and more recently managed bc Restaurant in downtown Syracuse. She now works as a reporter for the Western Onondaga County Journal, a weekly community newspaper.

Leahy is one of a long list of local restaurant industry veterans who got their start at Phoebe’s, including Chuck Pascale (Pascale’s Italian Bistro and several Pascale’s restaurants before it), Terry Riley (Riley’s on Park Street) and the late Patrick Heagerty (co-founder, with Karyn Korteling, of Pastabilities).

Phoebe’s officially turns 40 on Dec. 22, and the restaurant wears her age well. A landmark at the corner of East Genesee Street and Irving Avenue, she outgrew her original space and in 1985 expanded into the building next door, paving the way for a spacious, bright atrium dining room with warm brick walls, brass railings, comfortable upholstered seating and lots of light and greenery. A coffee lounge with coffee, espresso drinks and food to eat in or takeout, opened in 2005, on the Irving Avenue side of the restaurant. The restaurant now goes by the name Phoebe’s Restaurant and Coffee Lounge.

Owner Bill Eberhardt, 75, opened Phoebe’s Garden Café in 1976, two years after his painstaking restoration of the Sherwood Inn, a landmark in Skaneateles. He is the president of Dining Associates, which operates Patisserie, Gilda’s and the Blue Water Grill in Skaneateles, plus several inns and bed-and-breakfasts, in addition to the Sherwood and Phoebe’s.

Eberhardt earned a degree in business management from Syracuse University before beginning his career in the hospitality business. His travels took him to New York City sometimes, and he came home inspired by the restaurant scene there in the 1970s. At the time, he says, there were only a couple places in Syracuse to go for the kind of meal and atmosphere he appreciated: the Scotch ’N Sirloin, Scratch Daniel’s and the Brae Loch Inn. 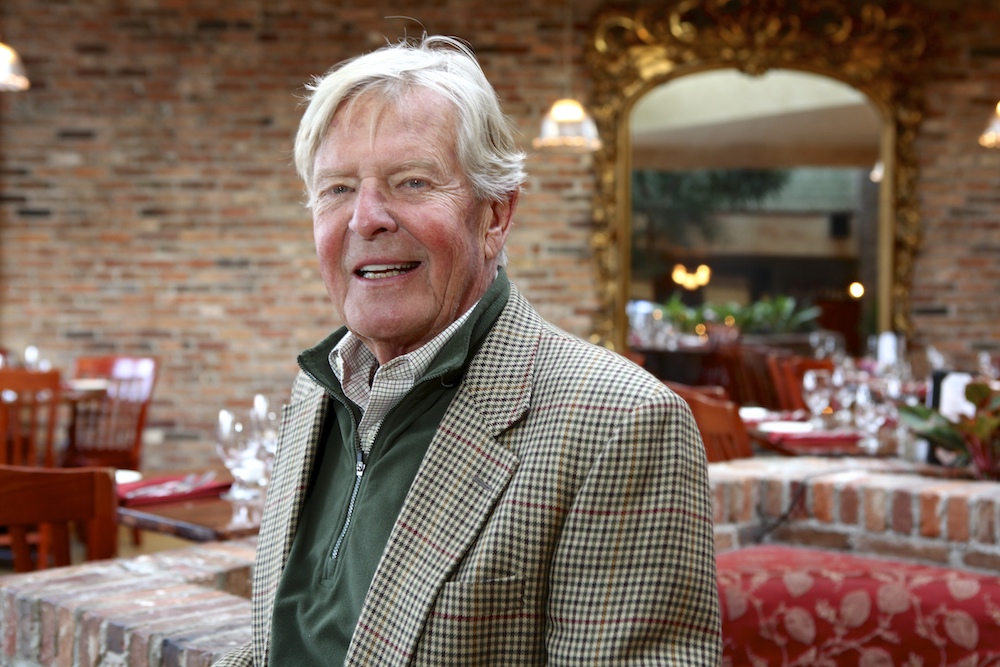 “I wanted to put a café on a sidewalk,’’ Eberhardt says. People told him he would fail in Skaneateles and they told him the same thing in Syracuse. Undeterred, he purchased a rundown building in a neighborhood near Syracuse University that was considered “rough.’’ The building was originally a brothel and Phoebe was its madam, according to local lore.

The restaurant opened three days before Christmas, with a menu of steaks, seafood, salads, burgers and bistro food with a French accent, including pate, beef bourguignon, deep-dish quiche and the now-famous French onion soup gratinee that is a Phoebe’s hallmark.

Long before the local foods and ingredients movement, Phoebe’s featured meat and produce from local and regional sources, filled its bread baskets with thick, dark rye from (the former) Snowflake Bakery and made things like mayonnaise and salad dressings in-house. Phoebe’s had an espresso machine, served loose-leaf teas and was instrumental in introducing the concept of wines by the glass to Central New York, Leahy says.

“It was a fun-loving place and we had a home run on our hands,’’ Eberhardt says. “We were purists and people were thrilled by it.’’

“I think people considered it a fun place doing a different kind of food than was traditionally being done in Syracuse,’’ recalls Chuck Pascale, who operated an art gallery in Liverpool and worked as a bartender at Phoebe’s in its early days. “It just hit the right chord at the right time.’’

Walt Shepperd was a teacher at Madison Junior High School in the 1960s and remembers the place as a “rugged’’ bar and nightclub with a lively music scene “run by an older woman of color named Phoebe.’’

In later years, when he was a writer, editor and columnist for the Syracuse New Times, Shepperd lived upstairs from Phoebe’s and had a designated seat at the bar, an easy place to enjoy his martinis and chat with people from many walks of life. The Syracuse Press Club held meetings there and Shepperd picked up his mail at the bar, where readers also left him news tips and story ideas.

“It’s the atmosphere that sells any place,’’ Shepperd says, “and Phoebe’s had a great atmosphere. It was a fern bar, it was upscale and you didn’t find a lot of that in those days.’’

There was no Armory Square, no Carrier Dome, no Connective Corridor, no Erie Boulevard dotted with chain restaurants: All of that would come later. But there was Syracuse Stage, a professional theater that was founded in 1974 and was beginning to establish its presence in the community. 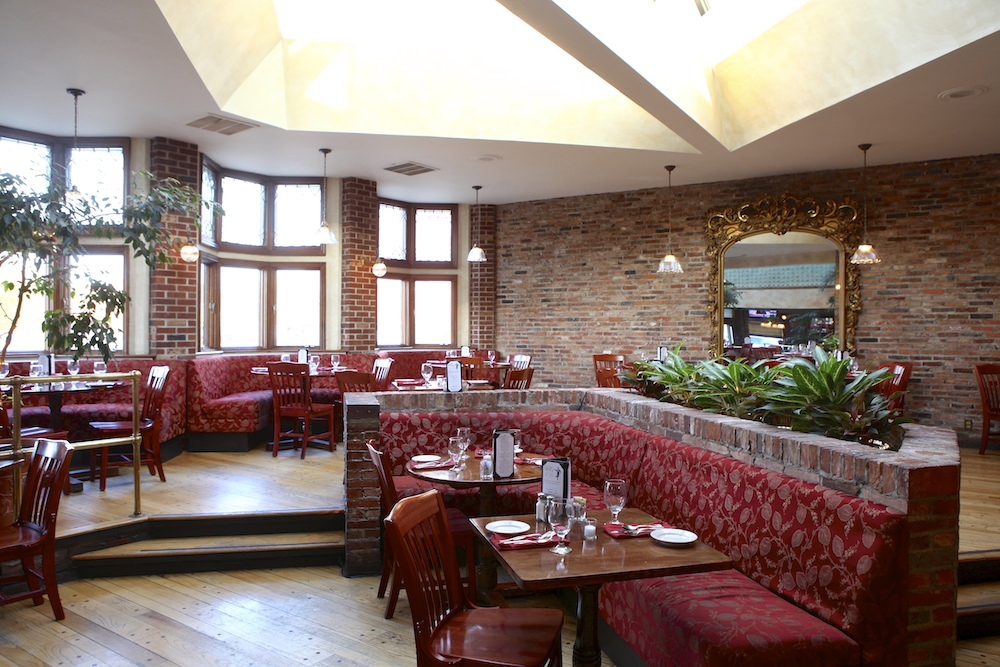 Eberhardt says Syracuse Stage, which is also home to the Syracuse University Department of Drama, plays a pivotal role in the success of Phoebe’s. Syracuse Stage marked its 40th anniversary in 2014, so the theater and the restaurant have evolved in tandem. Theater patrons know they can make a dinner reservation before a show and be in their seats in plenty of time for curtain or stop by the bar for a drink after the show and have an opportunity to mingle with cast and crew.

Joseph Whelan, director of marketing and communications, has enjoyed food from Phoebe’s for as long as he’s worked at Syracuse Stage, or 21 years. Whether it’s a quick stop for a coffee and a pastry, an event catered by Phoebe’s at the theater or lunch or supper at the restaurant, Whelan affirms, “You can always find something good.’’ 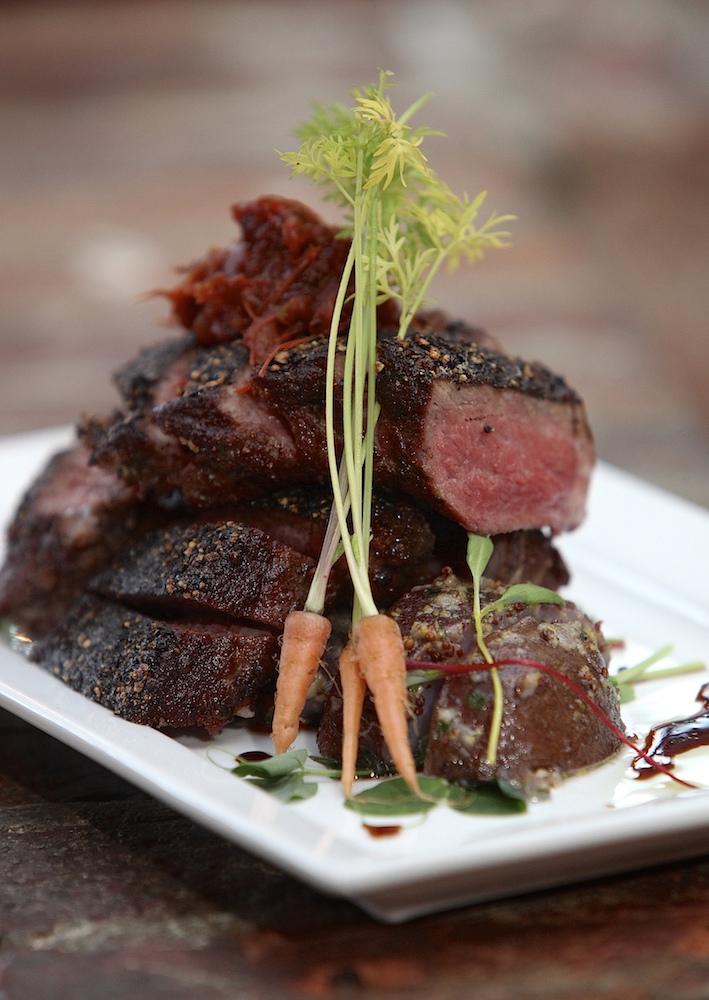 “They’re always great for a burger and they have some nice pasta dishes that I’ve enjoyed over the years,’’ Whelan says. “They also do salads really well: the Phoebe’s salad, Caesar salad and the arugula salad, which is quite tasty.’’

Kathy Sciuga, a social worker at Hutchings Psychiatric Center, has a relaxing, sit-down lunch with a couple of co-workers at Phoebe’s every Friday — a weekly tradition for 30 years. Sciuga might have the Phoebe’s salad, with mixed greens, red grapes, toasted walnuts and crumbled blue cheese. Or she might have her “usual,’’ a Caesar salad with grilled chicken, garlic croutons and Asiago cheese.

“That’s my standby,’’ Sciuga says of the chicken Caesar. “If I’m feeling naughty, I will get a burger and sweet potato fries. Their burgers are fantastic.’’

By this point, Sciuga says, the staff knows she likes her salad dressing on the side and that her group has limited time for lunch. “They do their best to make sure we’re accommodated, and they do a great job of getting customers in and hanging on to them,’’ Sciuga says.

What’s the secret of Phoebe’s longevity — and its success?

“Forty years is a long time in this industry,’’ Eberhardt says. He lectures regularly at the Cornell University School of Hotel Management and tells students, “Our casualty rate is second only to the used car business.’’

Eberhardt attributes the staying power of Phoebe’s to growth in the Syracuse University area and along East Genesee Street. The restaurant “lives in sync’’ with the theater and with SU, bringing in bar patrons and diners before and after games at the Carrier Dome and before/after the theater.

But it’s more than that, of course. Leahy says the cornerstones of Phoebe’s — and all of Eberhardt’s restaurants — are quality, ingredient-driven food, attention to detail, good value and first-rate service and hospitality.

Eberhardt visits Phoebe’s twice a week and meets with chef Nick Robson and general manager Angie Knox. His approach is to advise, encourage and support rather than actively manage, he says. He’s interested in creativity in the kitchen, “maniacal’’ about how seafood is handled and prepared and an advocate for ongoing staff training. Each night, he says, the wait staff samples entrees, specials and wine before dinner, so they can better inform and educate diners.

All these things seem to contribute to staff and customer loyalty. Knox has worked at Phoebe’s 18 years — half her life, she says. She keeps the ship steady and on course, balancing the multiple demands of the restaurant, private parties, special events, catering and more.

Not long ago, Leahy stopped in to Phoebe’s for supper before a show at Syracuse Stage. She ordered the French onion soup gratinee and the signature salad with red grapes and vinaigrette.

“The soup was the same recipe and the salad was delicious,’’ Leahy says. “It reminded me of the old Phoebe’s.’’

Margaret McCormick is a freelance writer and editor in Syracuse. She blogs about food at eatfirst.typepad.com. Follow her on twitter.com/mmccormickcny, connect on facebook.com/EatFirstCNY or email to [email protected].

Phoebe’s is marking its 40th anniversary this month with a two-for-$40 dinner special through Saturday, Nov. 26. Share a half bottle of wine and select an entree from a list that includes baked scrod, shrimp and grits, grilled pork tenderloin and cheese tortellini. The restaurant is also offering 40 wines for $40 or less per bottle.

Phoebe’s is located at 900 E. Genesee St., across from Syracuse Stage. For more information, call 475-5154 or go to phoebessyracuse.com.