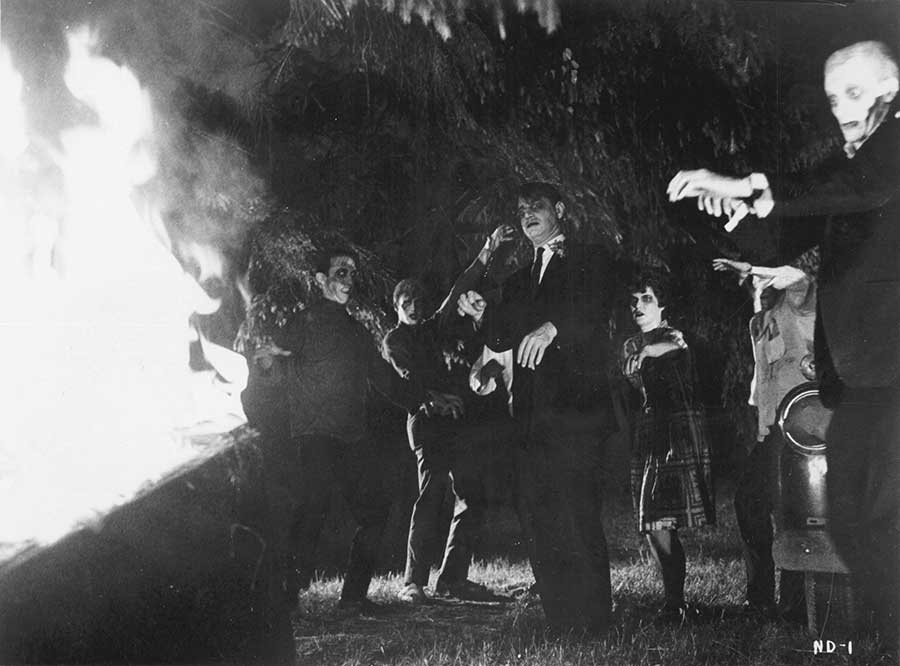 In interviews John Russo comes across as a friendly professorial type who is enjoying life as a senior citizen. But for many moviegoers he is also the architect of their nightmares: Russo co-wrote, with director George Romero, 1968’s Night of the Living Dead, the low-budget, black-and-white terror classic about carnivorous ghouls in search of human flesh.

Other guests at the Palace include actors Linnea Quigley and Gary Vincent and Bloodshock special effects artist Marcus Koch. Tickets are $35 in advance, $40 at the door. For information, call (315) 463-9240 or visit palaceonjames.com.

Russo graduated from West Virginia University with an English education degree in 1961. He eventually joined forces to make industrial films as part of The Latent Image company in Pittsburgh with his pals George Romero and Russell Streiner (who, as the bespectacled first victim in Night of the Living Dead, delivers the immortal line, “They’re coming to get you, Barbara!”) The trio and other investors then formed the Image Ten company to finance Living Dead, their first venture into feature-length cinema.

Perhaps because of the movie’s limited funds, its combination of believable characters, grisly set pieces, claustrophobic intensity and an unnerving sense of impending doom helped to create a landmark horror flick. And while copyright problems quickly relegated the shocker to the public domain, where it became a bootlegger favorite, Russo’s work has received the ultimate artistic validation: In 1999 it was added to the Library of Congress’ National Film Registry.

Did you think that you would still be talking about Night of the Living Dead 50 years later?

No one could have predicted the phenomenon that Night of the Living Dead has become — and actually was from its beginning. But all through production we had utter confidence in what we were doing and we were all solidly behind George Romero as the director.

By that time, our little five-man company had made dozens of TV spots, sales films, political spots and industrial films, and we had honed our skills to the point where our walls were covered with awards. We had developed into a highly skilled and tightly knit production unit. Nobody needed to be told what to do. We knew how to cast, do props and costumes, build sets and so on.

With Night of the Living Dead we absolutely knew we were making a good movie, but we didn’t know the distribution business yet, and so we did not absolutely know if we could get it sold. We figured we could get people to see it, even if we had to hand-carry it from theater to theater.

Were you always supposed to play several small roles (including the zombie who gets beaned with a tire iron and a news reporter) in Night of the Living Dead or did you have to play them?

I had to play those roles because nobody else was around to do it. We all had tremendous zeal and belief in ourselves, and we were bound and determined to do whatever had to be done. That’s why I volunteered to be set on fire in the Molotov cocktail sequence — without an asbestos suit. We used real gasoline and there were three takes — three different angles — and all three are in the movie.

Some writers have cited allusions to the then-raging Vietnam War in Night of the Living Dead. Are those writers incorrect?

We were not out to make a political statement. Even though in real life we were all against the war and had even gone to some of the anti-war rallies in Pittsburgh and filmed them, but the footage was lost in a 1976 flood.

Were you ever annoyed about Night of the Living Dead’s copyright issues and subsequent public domain status?

I am constantly not only annoyed but totally angry and frustrated about it. Our first print had a copyright notice, and it was the distributor (the Walter Reade Organization) who left it off the prints when the title was changed from Night of Anubis. By law, if a third party makes that kind of omission, the copyright should not be lost. And that is what we have been fighting with the copyright office ever since 1995, when they decided to revoke our registration.

Halloween director John Carpenter said that he felt “flattered” by the many sequels. Do you feel the same way about Night of the Living Dead’s offspring?

I feel gratified that my books and movies have been an inspiration to other filmmakers. Not just the production lessons that they teach but also how to take a small amount of independent financing and make a low-budget movie that can jump-start a career.

You went the Indiegogo route to help fund My Uncle John Is a Zombie. Would you do it again for future projects?

Generally I will take whatever route is necessary to go on making movies. It is a very tough business and not for the faint of heart. But I’ve managed to make a lot of movies during my long career and to get more than two dozen books, both fiction and non-fiction, published and sold in many countries.

Finally, what scares you?

What scares me is what goes on in the real world; my top fear right now is of what Trump is doing to our democracy. I have written a nonfiction book called Trumped Up! which is available on Amazon. Other realistic fears concern global warming, stupid wars, serial killers, too many guns, and on and on.

As far as movies go, some of the ones that gave me the most chills and thrills are Psycho, Alien, Halloween and the original Invasion of the Body Snatchers — not the remake, which I hated.