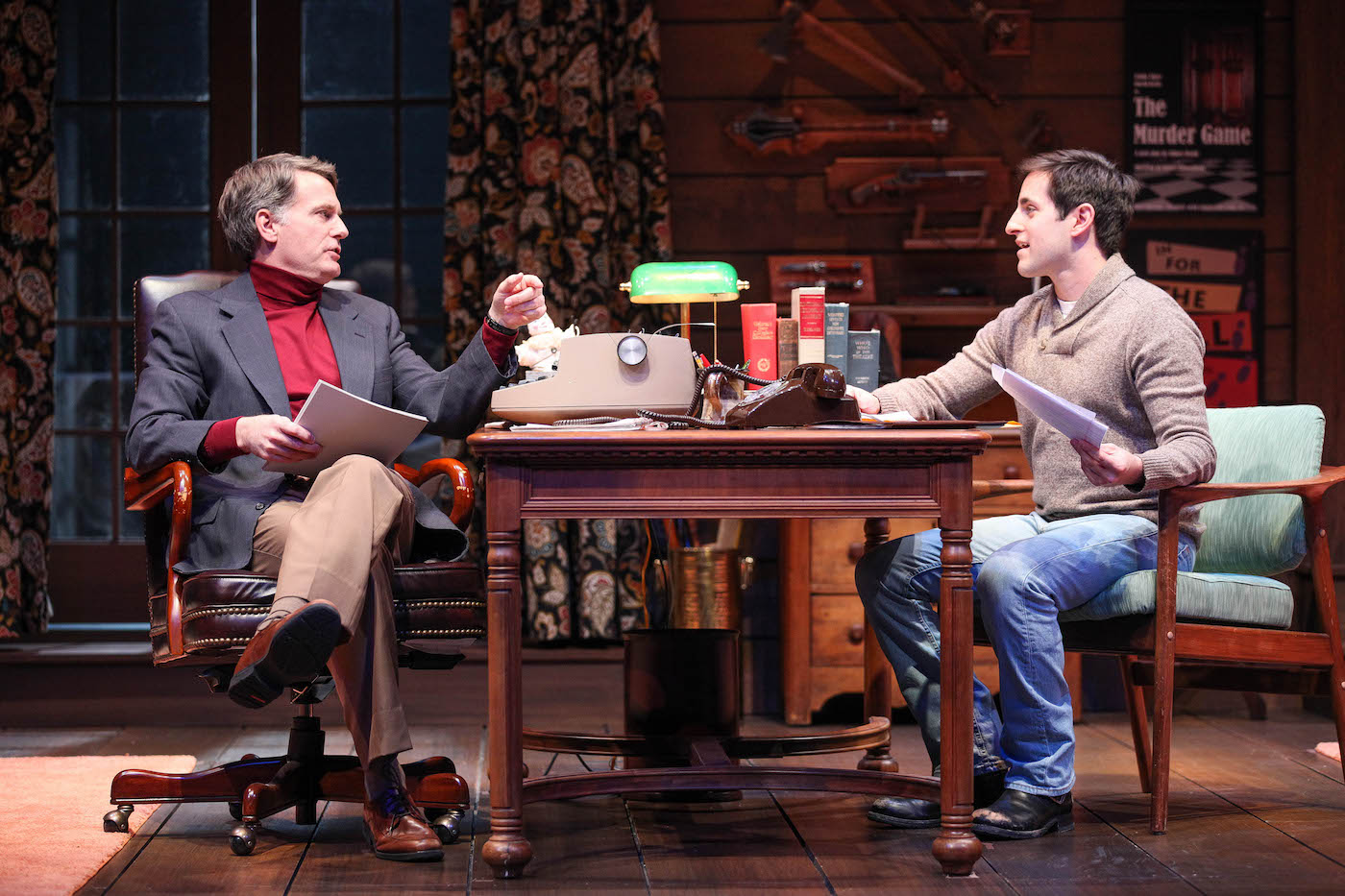 Talking about thrillers is a challenge to the threadbare ethics critics who pretend to keep up. Ira Levin’s Deathtrap (running through May 28 at Syracuse Stage) has more than a half-dozen taboo moments that must not be given away in a review, and they start coming about 25 minutes in. Deathtrap is not just a whodunit, and not only can we not tell you “who” is, we can’t even tell you what “it” is.

With those doors closed, let’s consider something concrete, like typewriters. Two of them appear on stage, one of them a classic green and yellow Smith-Corona portable manufactured at 700 E. Water St., later known as Midtown Plaza in Syracuse. It plays a considerable role in the plot. 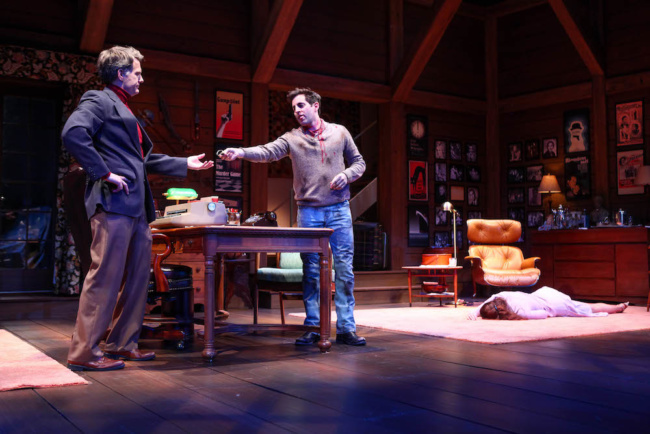 Deathtrap takes place in 1978, as we are reminded by carbon paper, dial phones, Danish modern furniture and a magenta turtleneck that Robert Wagner might have worn in his prime. The play is as securely fixed in time as The Three Musketeers is. Move the setting forward and the drama will collapse. Technology, specifically the smartphone, has been more damaging to the thriller than indiscreet reviewers. Tension relies on information not being accessible. There’s a lot we don’t know at the beginning, and when the truth enters, it thunders.

Sidney Bruhl (James Lloyd Reynolds) is a once-successful author of thrillers for the stage who is going through a long dry stretch. At the beginning of the action he’s straining his eyes to read a carbon copy of a new play written by a student, Clifford Anderson, he has been teaching part time. It’s called Deathtrap and it describes a set very much like the one before us: a beautiful paneled study, with antique weapons on the wall (props from other shows), in tony Westport, Conn. In reading the play, Sidney is beside himself in neuroses and self-accusation: This is exactly the play he’d like to write. He’s sure it will be a hit and make millions. But he knows he is no longer capable of fashioning such a masterwork himself.

James Thurber once said that a writer is somebody who thinks of something clever to say on the way home from the party. Levin (author of Rosemary’s Baby and The Stepford Wives) fixes that problem by creating a character who looks a little (ahem) like him and giving him nearly all the good lines.

Director Paul Barnes had previously worked with actor James Lloyd Reynolds for Syracuse Stage’s The Miracle Worker (March 2011). We can guess that there was no need for auditions, and Barnes went straight for the man he knew could strike sparks at every opportunity. At times it feels as though Reynolds’ Sidney is not trying to impersonate Agatha Christie as much as Oscar Wilde: “Nothing recedes like success.” How could such an adroit wordsmith be tongue-tied at the keyboard? Hmmmm. 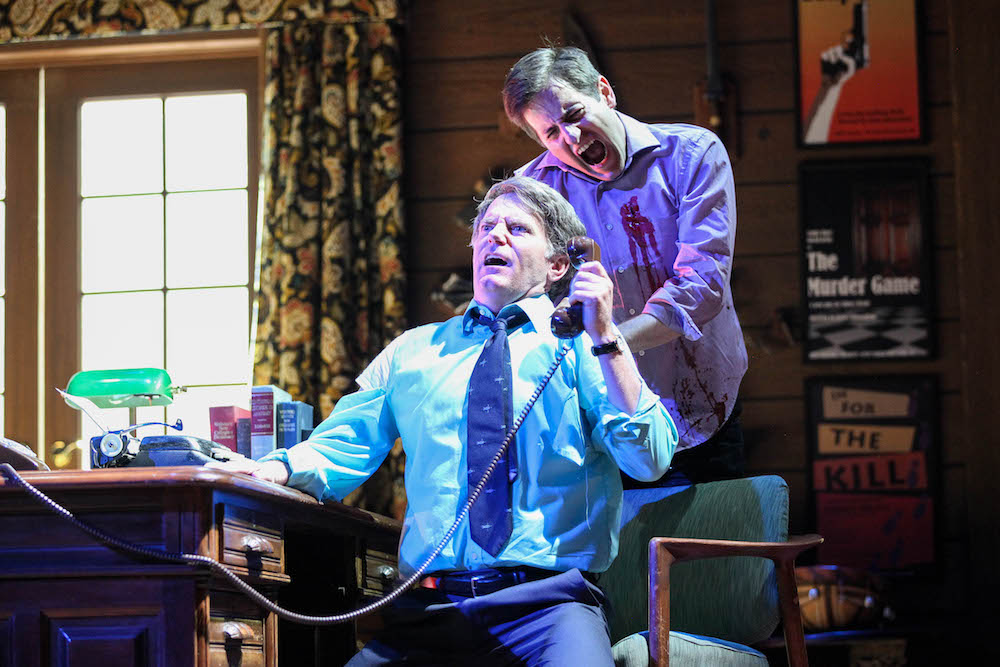 In talking about his admiration for the student’s play, and his own self-laceration, Sidney runs along two themes that snare our attention. One is to compare the script in his hand to classic stage thrillers, specifically Angel Street, Dial M for Murder and Anthony Shaffer’s Sleuth. (Indeed, overheard in the Syracuse Stage lobby was that some ticket-holders thought they were actually seeing Sleuth.) What Levin is doing in such dialogue is telling us that he has intensively studied the form and has amalgamated all the best themes and devices into one lollapalooza that will invite comparison with any rival.

Secondly, as Sidney reads Clifford’s play we see that it is identical with the play we are watching, notably in the portrayal of Sidney but also ominously in the description of all the weapons displayed on the wall. Antique, yes, but capable of being wielded without any special training. Experienced playgoers never forget Anton Chekhov’s advice that if you introduce a pistol in the first act, you must fire it before the final curtain. Levin, a superlative commercial entertainer, would surely have cringed at being called postmodern, but Deathtrap anticipates by decades arty confections like Jeff Brown and Hunter Bell’s [title of show,], a play about writing itself. 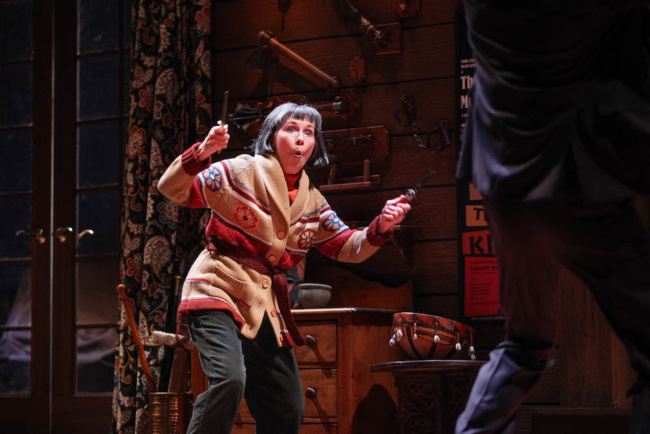 When student playwright Clifford Anderson (Carl Howell) does arrive, he turns out to be nothing like what Sidney spoke of remembering. In the 1982 film version the young hunky Christopher Reeve took the role, but although Howell’s looks would serve well at a dating service, he comes across as unthreatening and unprepossessing. Outwardly in awe of Sidney, he’s positively obsequious. He even appears to quiet the tensions between Sidney and his wife Myra (Anney Giobbe), who have been sniping all along. The one subject he ruminates on is the absence of further copies of his Deathtrap because the only photocopier is on the fritz.

Another visitor is the interloping neighbor, Helga ten Dorp (Joyce Cohen), a psychic with a heavy Dutch accent, boasting of an upcoming TV appearance on The Merv Griffin Show. In heavy-handed foreshadowing she feels “great pain” in the room. There were the makings of a significant comic character in Helga, but an excess of Rotterdam in actress Cohen’s accent muffled too many lines.

Once the shocks to the system roll in, the action in Deathtrap takes abrupt turns, hurtling us in new directions with the same characters on the same set. The zigzag progress in the action invites comparison with the prints by the celebrated Dutch artist Maurits Escher. Levin hints as much by having the family lawyer Porter (Curzon Dobell) refer to an offstage character named, significantly, “Morrie Escher.”

Not yet 40 years old, Deathtrap is one of the all-time popular American plays and was once a staple in community theater. Levin intended the show for Broadway, and it gains measurably from first-class production values, such as scenic designer William Bloodgood’s stylish but dated interiors, Lonnie Rafael Alcaraz’s brilliant and perfectly timed lighting design, and Joe Payne’s sound design for things that go bump in the night. The ones we can’t talk about.