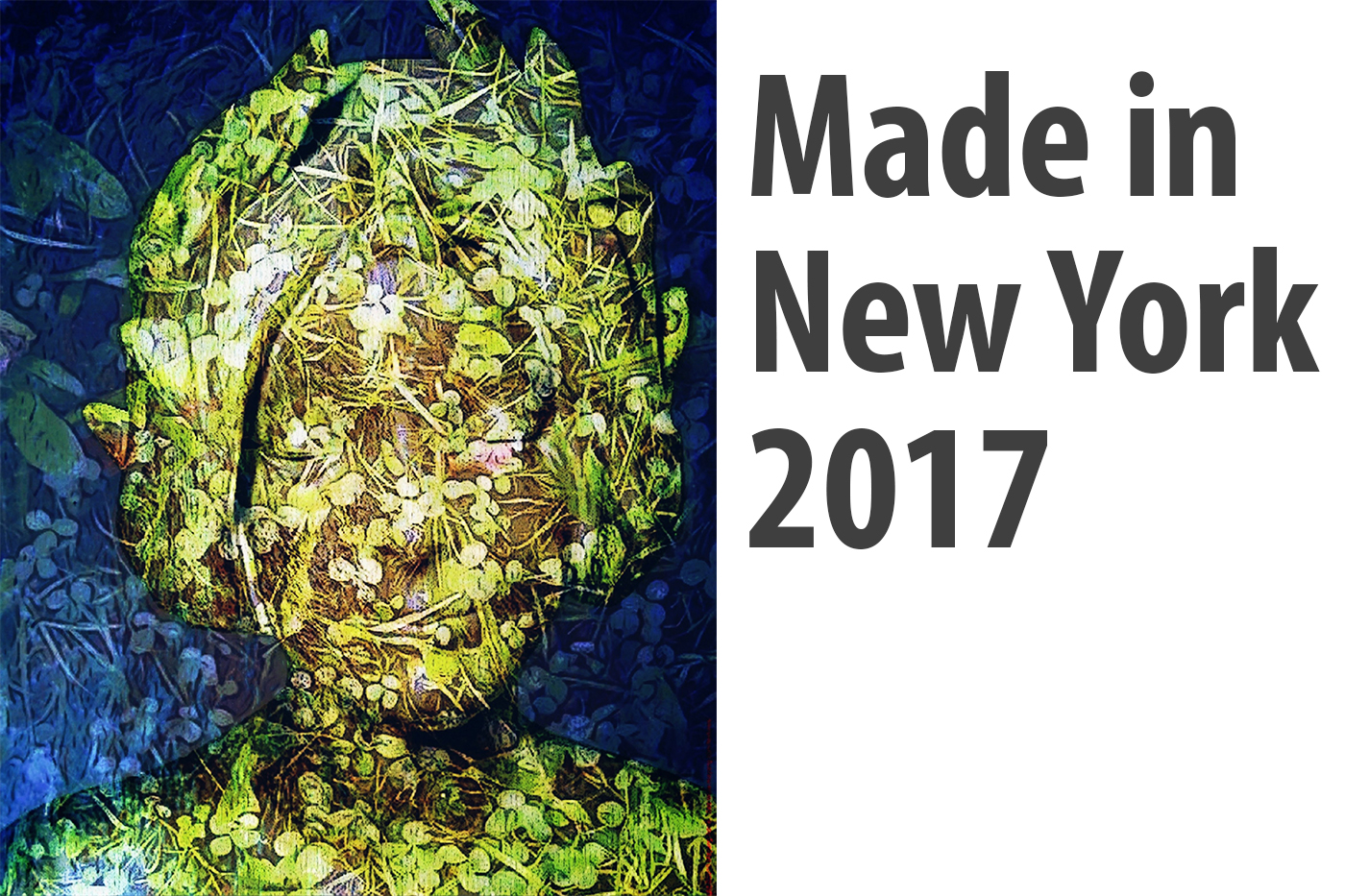 The annual exhibit Made in New York, like its predecessors, showcases work by artists from throughout New York state, from Syracuse and Ithaca, Geneva, Brooklyn and East Amherst. The show, staged at Auburn’s Schweinfurth Memorial Art Center, has long embraced the notion of change. Utilizing a different set of jurors each year results in shifts in the roster of artists and in the media on display.

Jurors Yvonne Buchanan and Nancy Green also dealt with an additional element of change: the introduction of a theme, “Envisioning the Future,” for the 2017 show. That’s a fairly general concept, but it did affect the exhibition. Among other things, it has various artworks exploring environmental concerns.

They include Lauren Skelly Bailey’s “Stacked Coral,” which references declining coral reefs and “Toxic Bloom,” an encaustic monotype by Beth Pendersen. Susan Larkin’s archival pigment print depicts a hand holding a cockroach; the work plays off the idea that cockroaches will survive even if humans vanish from the earth.

These pieces take varied approaches. Rosemary Krupka’s digital collage “Environmental Consciousness Has Taken Root in Our Lives” portrays a figure made of grasses and vegetation. “Field at Risk,” by Phyllis Bryce, documents a tract of land she’s seen on a regular basis and that she fears will be developed. Lisa Gregg Wightman delves into species extinction with a mixed-media monoprint featuring barren lines and an empty nest. It expresses a feeling of emptiness.

Such works don’t dominate the show. It’s open to Tom Hall’s fine installation, “It Could Be Paradise But It’s Only California,” which investigates the idea of westward expansion. Pennie Brantley’s oil, “Triumph (Sarlat-la-Caneda, France),” communicates adaptability in the form of a sycamore tree surviving in spite of its branches being trimmed. The painting documents Brantley’s attention to detail and color.

“Electric Care (Machine #1),” by Holly Wilson, combines shavers, a hairdryer, paint and objects such as curling irons and combs. It takes a sardonic look at products concerned with personal appearance. There’s a metal surface inviting viewers to look at their reflections.

The exhibit also presents “Prayer,” Bill Stephens’ pen-on-watercolor work discussing meditation; Emily Kenas’ assemblage placing small figures and metal and wood under a glass dome; and Donalee Wesley’s drawings delving into relationships between animals and humans. Wesley’s work has long explored that connection and has done so without a hint of repetition.

Diverse artworks range from Matthew Wilson’s teapot to Casey Landerkin’s gouache, “Tricked You into Following Me,” with its depiction of a forest scene full of peril. “Impermanence,” by Danielle Ruggiero, focuses on the prospect of decline and decay by blending together pieces of barn wood, unfired clay, paper, ink and other materials.

Although the exhibit’s theme suggests thinking about the future, several works do reflect on the past. In “Bone Memory Triptych,” Stefan Zoller remembers a relative he never met by revisiting drawings completed by his grandfather, a civic engineer.

And Chelsey Albert created “Legacy: An Immigrant’s Untold Story,” devoted to her grandfather who emigrated from Syria to the United States many years ago. The work, which combines ceramic, vinyl and mixed-media elements, offers an imaginative narrative including boxing gloves, an image of a father kissing a daughter, and a ceramic piece showing a man in bed while a creature hovers over him.

Other interesting pieces include “Apparition,” a mixed-media drawing by Madeline Bartley, and Roslyn Rose’s photo within a photo, “Beach House.” Look for Alan Singer’s “Future View,” a transfer monoprint on Fabriano paper.

The overall exhibit reminds viewers that Made in New York doesn’t promise stability, just substantial change. Several years ago, the show presented six or seven pieces depicting upstate New York landscapes; that kind of work is largely absent from the current exhibition. Similarly, installations played a larger role in past exhibits but not in the 2017 edition. This is an exhibit that continues to stay on the move.

John Edward: The Medium Is The Message
Murder Most Fun
To Top