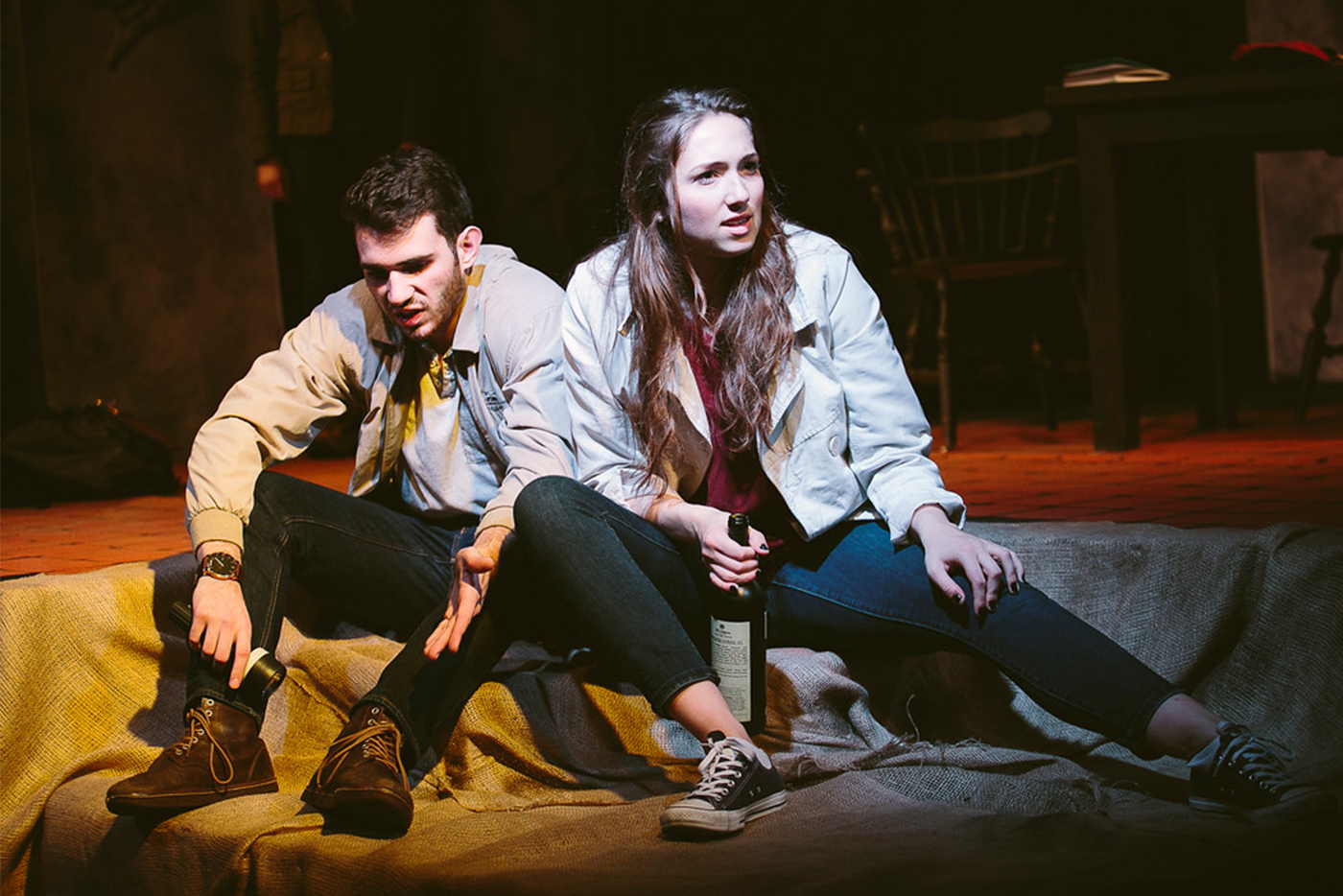 The past and present play key roles in murder mystery “Melagrana.”

“She wasn’t my friend. She was my roommate.” So says American archaeology student Margie Cameron (Natalie Oliver) to her impassive, no-nonsense interrogator, Ispettrice (inspector) Concetta Russo (Carmen Viviano-Crafts) in Melagrana, running through Saturday, Nov. 19, at the Central New York Playhouse.

The scene is rural Sicily, as we are reminded repeatedly by the appearances of the three-legged trinacria, symbol of the island. That roommate, an Australian student, Lorna Atherton (Madi Beumee), has been murdered. Len Fonte’s new play, in this world premiere production, comes with luxuriant layers of meaning, but on top it’s a murder mystery. Who killed Lorna?

In a program note, playwright-director Fonte acknowledges that the action might remind us of the lurid, high-profile murder trial of Amanda Knox in Perugia on mainland Italy. He quickly adds that Margie is no Amanda. The student in Melagrana has no record of sleazy sex.

And she’s captivated by Sicily’s classical past, reflected by the marble columns in Navroz Dabu’s set. This links her to sensitive-looking Sicilian archaeologist Ettore Farinelli (Nick Torturro), who has risen from the families of common shepherds, a guy from the soil she embraces. They could be finding treasures together.

Action moves forward on two levels. In the present we follow the inspector’s interrogation of Margie. Natalie Oliver as Margie is blessed with leading-lady attractiveness, but although audiences are used to identifying with beautiful women, she signals an off-putting skittishness and querulousness. More important than her good looks, Oliver brings a highly expressive face, every cheek muscle modifying or amplifying an emotion.

Contrasting with Margie’s malleability is the unresponsive ispettrice. Carmen Viviano-Crafts, one of the top community theater players, allows that the character has two small children, but gives nothing else away. The ispettrice is the law, not a therapist or comforter. Much of the text of the play is dramatized in their dialogues, in which the tension remains high.

The second level is what happened before the murder, told in flashback. Up close, the deceased Lorna turns out to be a shallow, exploitive person. She’s an anthropology student, the kind of profession that often comes off well in popular literature. Not here. She focuses on Sicily’s grimier side, victims of Mafia violence, by recording intrusive testimonies of suffering.

Her lust brings her closer to the Amanda Knox story. She beds a guileless shepherd, Robertino Profetta (Giovanni Da-Silva), with poor language skills. Earlier, before the beginning of the action, Robertino had serenaded us with the plaintive Sicilian ballad, whose words are not translated. Da-Silva, a Syracuse University Drama Department student who has also sung at the Glimmerglass Festival, delivers a splendid, touching performance, underscoring the regard playwright Fonte, the grandchild of immigrants, has for all things Sicilian. And presumably, protagonist Margie as well.

Margie, who is always seen in coarse-soled heavy boots, has fallen in love with the island’s ancient history. She’s one of those northerners seduced by the sunny Mediterranean. That includes its stories. Sicily was Greek, Magna Graecia, before being overrun by the Romans. The Greek myth of Persephone and her dark lover Hades is sometimes set here.

Not only is the narrative included in the dialogue, but repeated allusions to it appear. Margie continually reminds us that Persephone was first known as Koré, the word for “girl,” an innocent, and a daughter of the fertility goddess Demeter.

Koré was walking when the earth opened up revealing Hades, who offered her some pomegranate to eat. The seeds of the fruit are enclosed in translucent red pulp, about the size of a corn kernel. When she eats more than six of them, she is transformed into Persephone, the dark and dangerous goddess, known as Proserpina later to the Romans. When the heedless Lorna in flashback is about to scarf down a dollop of them, Margie screams a warning. Which leads to the title of the play: Melagrana is Italian for pomegranate.

Meanwhile, further flashbacks reveal that Margie faced real-life challenges not rooted in mythology. She was initially drawn to her Sicilian boyfriend Ettore because she perceived him as an expert in the pursuits she wishes to follow. Eventually, we see him as a weaker character than she supposes, and her esteem and ambition are propping him up. His grant is dependent on his making an impressive find. Can that be done?

Melagrana was developed in workshop with Armory Square Players, cited here as co-producer along with Central New York Playhouse. We can feel this especially in the Margie-Ispettrice dialogues so redolent with meaning. The SU Drama Department also makes an important contribution, as it is the home of all of the players except for Carmen Viviano-Crafts. All are very polished, especially Natalie Oliver and Giovanni Da-Silva. Further departmental contributions come with the dialect coaching of Celia Madeoy and Thom Miller, with Felix Ivanov assisting with fight choreography.

Len Fonte was the longtime, much-lauded head of the theater program at Nottingham High School, and has contributed theater criticism to the Syracuse New Times and a Syracuse daily. His Melagrana is an involving and classy event.