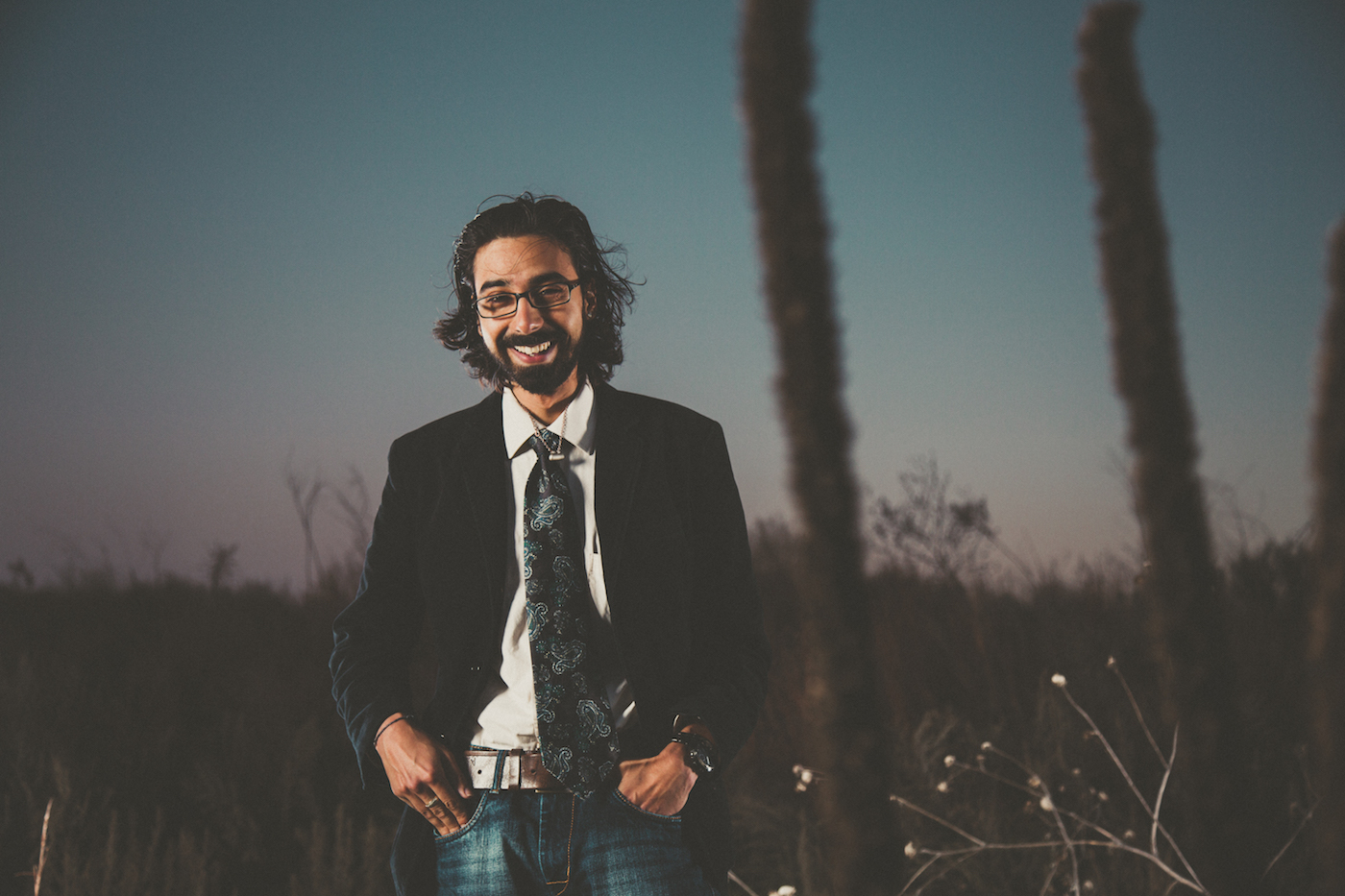 Washington D.C.-based comedian Krish Mohan will take the stage Saturday, Jan. 7, 8 p.m., at Auburn Public Theater, 8 Exchange St. (Tickets are $15 in advance, $17 at the door.) Yet there is a good chance you have not heard about him. He hasn’t made television appearances on the late-night gabfest shows, and he hasn’t been seen on comedy specials. Avid radio listeners may have heard him on NPR programming or iHeartRadio’s Indie Bohemians.

The pithy Indian-American comic hops from club to club and updates a weekly satirical show, Fork Full of Noodles, on YouTube, plus his Taboo Table Talk podcast is about topics we all should be having at our dinner tables. Mohan’s fifth comedy album How Not to Fit In, released last August, features his sociological and political commentary.

Mohan chatted with the Syracuse New Times on a gig-free New Year’s Eve. “This is the first New Year’s Eve where I haven’t had a show in four or five years,” he admitted. “I’m going to see a friend, Tom Simmons, perform comedy at a club in Baltimore. The one thing of being on the road is that you don’t get to see friends every day. I get to see what new material he’s working on and talk shop with him after the show.”

When did you realize you wanted to pursue comedy?

In high school at a talent show. I had a bunch of friends who were in bands, and one told me to try out and use the jokes I had. I really didn’t have jokes; I was talking about things my mom does. I went home, filled eight note cards with material, which was something like a minute per card. After trying out, I made it into the show. So I’d go to a coffee shop every Friday night to write down material and sort out jokes, figure out what’s funny.

You’ve moved from topics about your mom to society and political commentary. How has your process changed?

I write every week, especially with my web series Fork Full of Noodles. Each weekly episode is based on a news story or particular issue.

I keep challenging myself to see if I can make some of the more difficult topics funnier. I push myself to keep writing every week, yet life gets in the way, and I may not get the chance to write every week.

I enjoy listening to my past sets, seeing if lines need to be cleaned up or if bits have to be changed around, taking a different approach to a topic. I try to write at least a little bit every day, even if it’s a line or two.

The questions I keep referring to: Why is this the norm? Why is this particular behavior considered normal? Why aren’t we considering something a little different? Why not find solutions instead of perpetuating the same thing over and over again?

The topics you tackle have the potential to be controversial. Did you have to hurdle over personal barriers or reluctance?

It’s a choice: Do you want part of the piece to be a point, or do you want to make that funny? If the decision is made to find something absurd and make it funny, what is the appropriate way to go about it? It’s also important to keep the integrity about what I’m trying to say. It’s important to make points, because they can be more jarring than trying to make a joke, and that’s what I want.

The back and forth: This is what’s fun about the process. It keeps me excited about the material. It’s not doing the same thing the same way over and over again.

You reached out to us about your upcoming show. Do you always self-promote?

Yeah, I don’t have an agent. I’m not that famous. Everything I produce is promoted by me. I don’t like self-promotion, but it’s the necessary evil of my job. I don’t want to come across egotistical.

Standup comedy doesn’t really work without an audience. In order to get an audience, you have to tell people about it. If I could get at least 30 to 50 to come out to my shows in each city, that would be awesome. The opener gets paid well, the venue gets a great crowd, and I’ll be able to make a living in front of a good, open-minded crowd willing to listen to and enjoy something a little different.

Where else do you pull ideas from? Do you read a lot? Do you enjoy music?

Books are hard for me to get into. I try to read whatever book I’m reading once or twice a week, but I fall behind and it turns into four or five days out of the month. But I’ll read a lot of articles and essays based on stuff I’m interested in.

I always have to have some type of noise in the background while reading. It helps me focus. I listen to a lot of instrumental bands or political rap, because the vocals have a certain cadence to them. With the beat on top of that, I can still drum on a table and still be focused on what I’m reading or writing.

Any current topic you are more interested in than others?

I’ve made the mistake a lot of people do: not reading the opposition. I’m progressive and liberal. A year or two ago I would have said I’m not reading that garbage (referring to more conservative literature). Now I think it’s really important, especially with particular topics being brought up by conservatives.

HB2 (House Bill 2, North Carolina’s controversial Public Facilities Privacy and Security Act) was one of those bills. I want to know what they are saying and what the rationale is behind it. Why is it that transgender people not use the bathroom? I’m trying to be more aware of the opposite belief system and ideals as I have. Having this knowledge allows me to have a conversation with the opposition, not spring at them. And vice versa. It’s important to be proactive and be empathetic.

Are there topics you’re not willing to talk about?

I don’t think so. It’s a matter of what’s interesting to me. I’ve started to think about the bigger picture.

There are discrimination bills that keep coming out and are trying to be pushed through Congress. They’re willing to take away the rights of gay people to sue companies that fired them because they’re gay, a company that has fired an unwed mother or a couple that lives together, on the basis of religion. Or it’s simply taking rights away from people. Now you can’t sue them, and it’s making discrimination the norm again. Well, there is one right we can take away, let’s see what else we can take away and then another one. It’s a daisy chain of taking rights away, and it’s closing up the conversation a little bit.

There are bigger problems that comes out of seemingly small legislation. It’s human behavior, and the choices we make based off of certain behaviors.

Human behavior is always fascinating. Is this what you went to school for?

I went to school for graphic design, but even that can be turned into a study of human behavior, about how we view patterns and how we associate meanings. I would correlate that graphic design and comedy have a lot to do with each other. They utilize the creative process in the same way, and there is art behind all of this.

You can have a great piece of graphic design that says a whole lot in a little bit, and the same thing goes for standup comedy. Why did this person opt for the red bag instead of the blue one? This person who buys the red bag views this with having a sense of power and views themselves as being more passionate. The yellow and black bag isn’t selling, because humans associate the colors with bees and bees are dangerous. Now we associate the yellow and black with danger.

Any other projects in the works?

At the moment, all I’m really doing is touring. (Laughs.) I’ve been working on the Taboo Table Talk since June. I’ve gotten to the point where I’m happy with it, knowing that I have something I can jump off from. I can now sharpen what I have and figure out what I want to talk about next.

I don’t have any television appearances lined up. Normally this type of comedy isn’t seen on TV very often. I don’t think it’s commercially viable. But that isn’t why I do comedy. I want to keep getting better and having whatever I want to talk about, whether it’s mental health or the state of the country, be funny and have substance.

I think self-betterment is always the ultimate resolution and sticking to it. Our resolutions should be to stick to our resolutions, but I think being empathetic and more understanding, especially to points that I disagree on. It’s OK that we both have different beliefs, but can we just respect each other as people instead of judging and killing ourselves over the trivial little things we’re getting angry about.

What will people get out of your show?

The show is based around breaking stigmas. Hopefully, they won’t feel terrible. (Laughs.)

Wishful Thinking For 2017’s Music Scene
Season On The Brink?
To Top