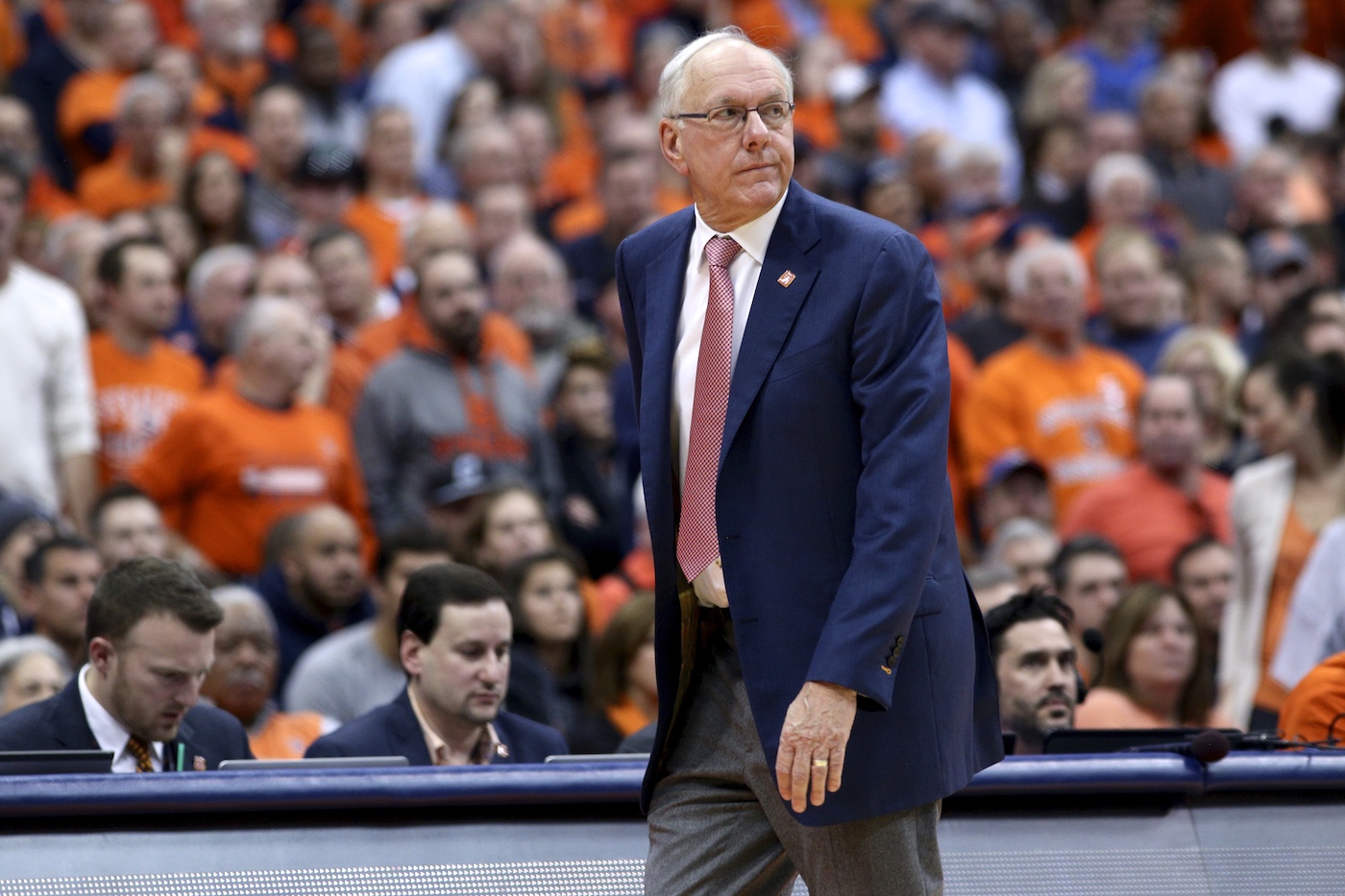 Season On The Brink?

With few quality wins for the Orange, Coach Jim Boeheim’s hoops squad has 17 games left to get their act together.

Cooney, a shooting guard who graduated from Syracuse University last spring, was a verbal punching bag for many Orange fans who expected him to become the next Gerry McNamara. But Cooney did play stellar defense at the top of SU’s 2-3 zone, and we’re finding out this season what that meant to the Orange. 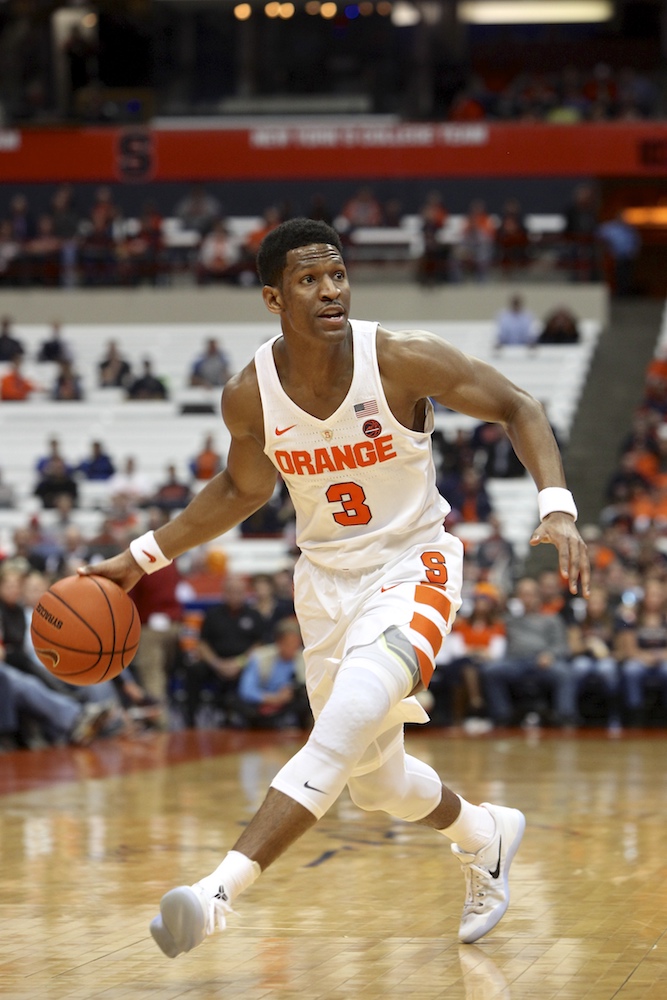 There are several reasons why Syracuse, which reached the Final Four with Cooney last year, is a pedestrian 8-6 this season heading into its Atlantic Coast Conference home opener against Miami on Wednesday, Jan. 4, 7 p.m., at the Carrier Dome. At the top of that list is the defensive play of SU’s guards, who haven’t come close to matching what Cooney and Michael Gbinije did for the Orange last season.

In SU’s ACC opener on New Year’s Day, Boston College freshman Bowman joined the club by shooting 7-for-8 from 3-point range and scoring 30 points in the Eagles’ 96-81 rout of the Orange. BC shot 57.1 percent overall and connected on 16 of 26 shots from beyond the arc.

“I don’t think it matters who we play; they’re not guarding people,” Boeheim added. “That’s the biggest problem we have. Against anybody who can shoot at all, our defense has been nonexistent.”

The Orange thought it hit rock bottom Dec. 21, when it suffered the worst home loss in Boeheim’s 41-year tenure: a humiliating 93-60 defeat to a 5-7 St. John’s team that was apparently better than its record showed as the Red Storm also upset then-No. 13 Butler Dec. 29.

The loss to St. John’s was SU’s fifth non-conference loss, marking the first time a Boeheim-coached team had ever lost five non-conference games. The next morning, before they left campus for a short Christmas break, the players held a players-only meeting at the Carmelo K. Anthony Basketball Center.

“We don’t want to waste a great team and a potentially great season because we aren’t playing hard and not being focused,” Orange guard Frank Howard said following SU’s 80-56 win over Cornell Dec. 27. “We had to sit down and reflect and look at ourselves first and then look at our teammates. We came to the agreement we are going to give it our all every day.”

That worked against Cornell, but SU hit a new low against a 7-6 Boston College team that hadn’t won an ACC game since March 7, 2015, and had lost to Nicholls State and Hartford earlier this season. The Eagles snapped their 20-game, 664-day ACC losing streak by scoring 96 points, the most Syracuse has allowed in an ACC game since joining the conference in 2013-2014.

“I really don’t have a good explanation for it,” Boeheim said. “I think they’re working hard, I think they’re trying to do what we want them to do. But we’re not reading where the shooters are, and if you give guys open shots in college basketball, they’re going to make them.”

Before this season, Boeheim looked at his team’s depth and versatility and declared to ESPN that “This is the best team we’ve had in a long time.” But now, with the Christmas trees on the curb and the Golden Snowball race in full swing, this season may become more about Boeheim avoiding his first losing season than Syracuse making the NCAA Tournament.

While we’re pining for the Trevor Cooney glory days, let’s dig deep and find five reasons why we want to keep watching Syracuse basketball this winter:

So You’re Telling Me There’s a Chance. The Orange has not defeated a team from a Power Five conference or the Big East Conference this season. After the loss to Boston College, SU’s RPI ranking — a big reason the Orange made the NCAA Tournament last season despite a 19-13 record — was No. 222 out of 351 Division I teams. In case you’re wondering, SU was just behind Furman and just ahead of Gardner Webb.

Since only 68 teams qualify for the tournament, it’s not looking good for the Orange. But playing in the loaded ACC, SU will have several opportunities to notch impact wins if the Orange can get its act together.

Of its 17 remaining games, SU will play 10 against top-25 ACC teams (Duke, Louisville, Virginia, Florida State, North Carolina, Virginia Tech and Notre Dame) or teams on the fringe of the top 25 (Clemson and Miami). Four of those games are at the Dome against Florida State, Virginia, Louisville and Duke, so the Orange will get to play underdog and try to steal one or two in front of a large home crowd.

“We play a lot of good teams and if we get some of these wins, we’ll be right back on track where we’re supposed to be,” SU freshman guard Tyus Battle said.

Mr. 1,000*. Boeheim needs seven more wins to become only the second coach in Division I history to reach 1,000 wins. Can he get it this year, and how will it be celebrated? In the record books, Boeheim is listed with 892 wins as the NCAA stripped 101 wins from Syracuse between 2004-2012 because of NCAA violations.

Boeheim has repeatedly said that he doesn’t care about the records, but 1,000 is extremely special as Duke’s Mike Krzyzewski (1,055) is the only coach who has topped that mark. Even at 892 wins, Boeheim is 11 wins shy of passing Bobby Knight (again) for second place on the all-time list. 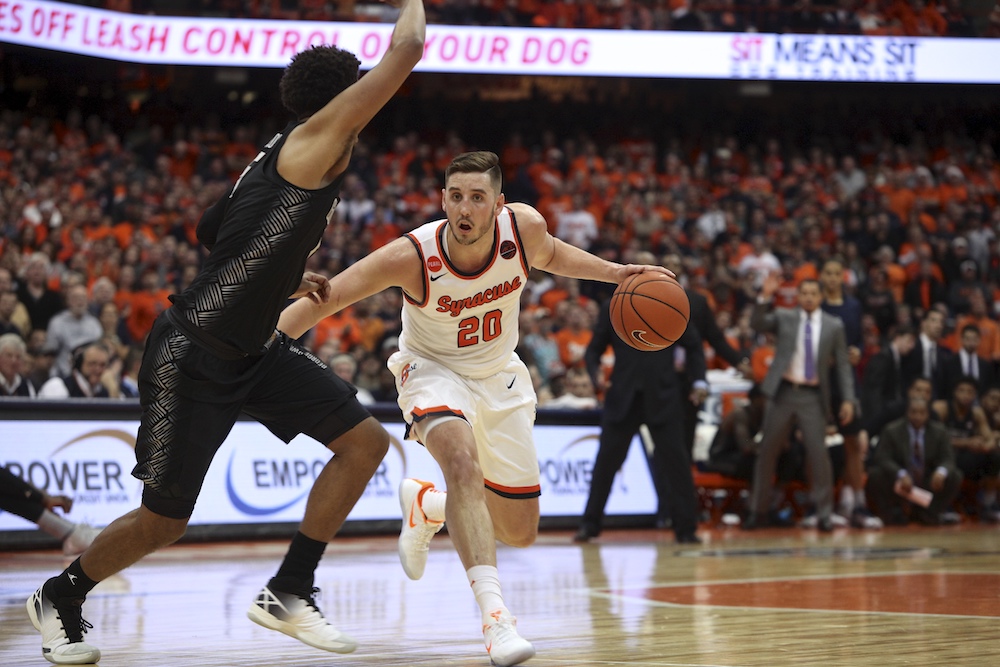 Will Lydon Go Pro? After a slow start, sophomore forward Tyler Lydon has asserted himself as Syracuse’s best player, averaging 13.1 points and 8.0 rebounds per game and showing a determination that is often lacking among his teammates.

Depending on what NBA mock draft you’re looking at, Lydon is projected to get picked anywhere from the middle of the first round through the second round. The 6-foot-9, 225-pound Lydon is most comfortable at power forward, but he may be undersized to play that position in the NBA. Will he return to get stronger and refine his game, or bolt a Syracuse team that’s already losing four seniors (fifth-year transfers Andrew White and John Gillon, and seniors DaJuan Coleman and Tyler Roberson)?

The Progress of the Underclassmen. If Lydon leaves, the Orange will be left with four returning scholarship players: freshmen Battle and Taurean Thompson, sophomore Howard, and redshirt sophomore center Paschal Chukwu, who played in seven games before suffering what could be a season-ending eye injury.

For the 2017-2018 Orange to avoid a repeat of this year’s disastrous start, Battle and Thompson must emerge as stars. Battle, a 6-6 shooting guard, has shown flashes of brilliance (8.3 points in 23.6 minutes per game) while dealing with a nagging foot injury.

Thompson, a 6-10 forward who has been moved to center to accommodate Lydon at power forward and White at small forward, has shown the biggest upside as he’s averaging 9.4 points and 3.9 rebounds in just 17.8 minutes per game. Thompson’s minutes will continue to rise as Boeheim has decided to trade Thompson’s defensive inexperience for his offensive potential.

“He is a very, very good offensive player. Very gifted,” Boeheim said. “He needs work on his defense, rebounding-wise. He is our best low-post player and it’s not even close.”

Howard, SU’s starting point guard, ranks second in the ACC in assists (6.0) and fourth in assist-to-turnover ratio (2.5-to-1), but most of his numbers were compiled against low- to mid-major teams. Gillon is also a point guard and leads the ACC in assist-to-turnover ratio (3.5-to-1), but Howard will be SU’s point guard next year and SU will feel a lot better about next season if he shows improvement the second half of this year.

Next year’s roster will be filled out by 6-8 forward Matthew Moyer, who’s redshirting this season, and two recruits who have already committed: 6-8 forward Oshae Brissett and 6-10 center Bourama Sidibe. The Orange could use an impact recruit because neither Brissett nor Sidibe is a top-50 recruit, and SU has already missed out on several highly rated recruits in this year’s class, including Quade Green and Nick Richards (Kentucky), Brandon Randolph (Arizona) and Lonnie Walker (Miami). 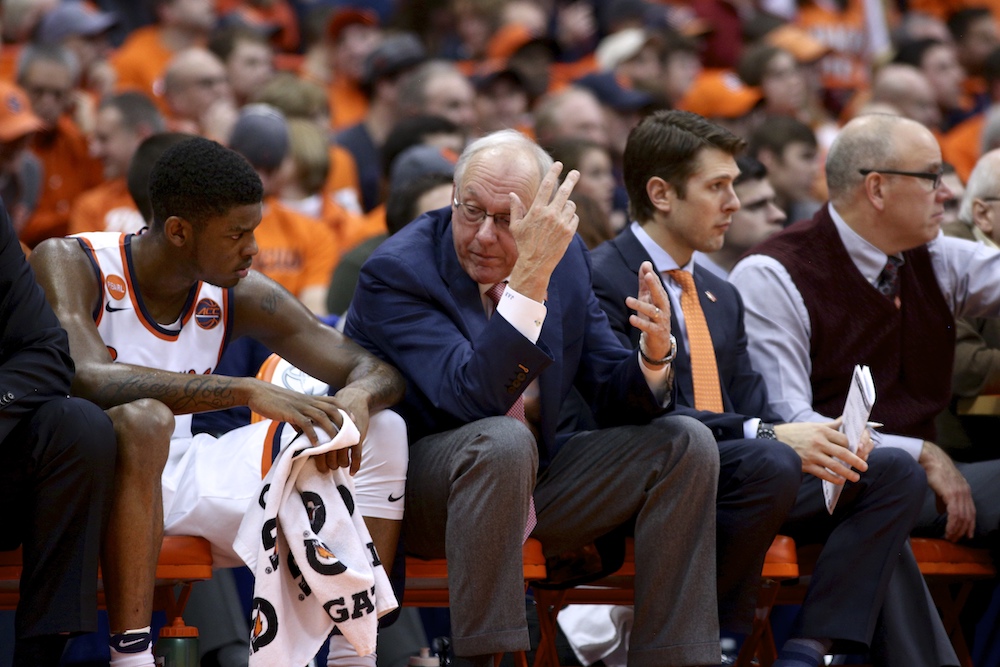 Jim Boeheim sits next to Frank Howard on the bench in a game against Georgetown. Michael Davis photo | Syracuse New Times

Boeheim’s Future. In March 2015, Boeheim’s plans to coach three more years were announced in the immediate aftermath of the NCAA investigation into SU’s program.

But that announcement was made at a time when former athletic director Daryl Gross was assigned a new position, and when several national media outlets were calling for Boeheim to step down. With new athletic director John Wildhack in place and last year’s Final Four appearance in the bank, many wonder if the 72-year-old Boeheim is ready to call it quits after next season.

Boeheim may have provided a window into his thinking following the Final Four loss to North Carolina, when he was asked if he considered retiring then so he could go out with a Final Four appearance.

So perhaps more than anything else, the rest of this season may help Boeheim determine if it’s going to be hard to walk away, or really easy.

Krish Mohan: Not Yet a Household Name
Photo Gallery: Syracuse Men’s Basketball Vs. Miami
To Top