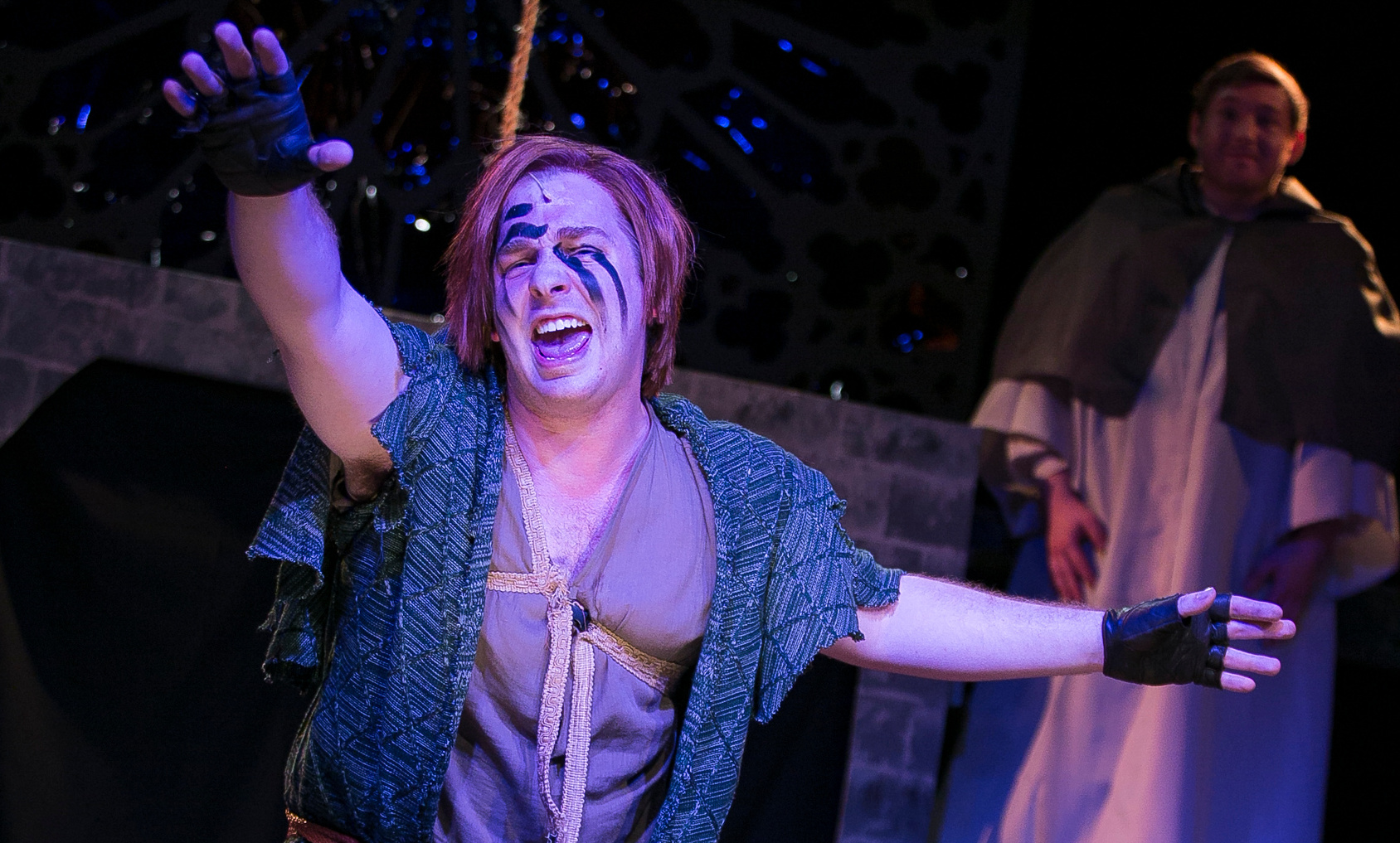 With 52 performers on the floorboards plus 13 players in the orchestra, the musical stage version of The Hunchback of Notre Dame shapes up as the grandest production ever from the Baldwinsville Theatre Guild (running through Saturday, Feb. 10).

If the citation of the Alan Menken-Stephen Schwartz score brings to mind the 1996 Walt Disney animated film, don’t be misled. This much more mature stage version of the Victor Hugo classic comes from Peter Parnell’s 2014 book and became infamous among musical theater buffs when, in spring 2015, it did not go to Broadway. Among this Hunchback’s many allures is the chance to see the one that nearly got away.

In the late 1990s the Disney company realized its shows could reach greater heights if they escaped from the treacly family entertainment box. Thus, Broadway director Julie Taymor, borrowing from avant-garde theater, opened The Lion King in 1997. By 1999 Stephen Sondheim collaborator James Lapine excised all the cutes from the Hunchback cartoon and opened a German-language version in Berlin. It was a major hit, running for three years and playing other European capitals.

As it was thought too dour for America, in 2014 Peter Parnell wrote the version seen here for the La Jolla Playhouse in San Diego, which next year ran for a month at the Paper Mill Playhouse in New Jersey. Despite ecstatic word-of-mouth, the powers that be decided against a Broadway opening.

Hunchback, like Hugo’s Les Miserables, is a sprawling 19th-century novel, with 10 named characters and seven supporting players who also have multiple roles. The relatively small BTG space allows director Abel Searor to focus attention on the crowded stage as well as sort out the lengthy exposition, beginning with explaining how the Hunchback came to reside in the Cathedral. Two orphaned brothers, wastrel Jehan (Derek Powell) and pious Claude Frollo (Bob Brown), take different moral paths. Jehan gets Gypsy woman Florika (Taylor Peck) pregnant, producing a malformed child. As the father is dying of the pox he bids his brother, Claude, now archdeacon of Notre Dame, to take the child, whom he calls Quasimodo.

Years pass. A previously unnoticed male actor emerges from the pack to call out, “What makes a monster, and what makes a man?” He uses his fingers to paint a series of lines on his face, signaling deformity, and straps on a prosthetic “hunch” before jumping to swing a knotted rope implying a bell pull. What an entrance for the title character, played by Liam Fitzpatrick. Searor’s note identifies the man-monster quote as the central theme of the complex action.

Three characters influence much action, starting with boisterous Clopin (Josh Taylor), leader of the Gypsies, whose “Topsy Turvy” embodies all that the sour-faced Frollo would keep out of Quasimodo’s life. Even more impressive is the tall, vivacious Gypsy girl Esmeralda (Ceara Windhausen) with the show-stopping “Rhythm of the Tambourine.” Taylor, who always gives more than his share to BTG productions (he also built the set with its stained-glass window), revives some of the demonic energy of his recent American Idiot. Windhausen, one of our strongest players, dominates even the most crowded of scenes.

Captain Phoebus (Paul Thompson) of the city guards represents civil law, but he flirts with the girls at his entrance, “Rest and Recreation.” The ever-icy Frollo wants Phoebus to chase away the Gypsies near the cathedral. The cleric is horrified to see a bond growing between Esmeralda and Quasimodo. And like so many surface puritans, at least in stories, underneath Frollo nurtures of potent lechery for the girl. This inevitably leads to trouble and the threat of execution.

As compelling as the plot may be, Hunchback is more about spectacle than story. With its medieval setting, the 22-person choir in robes on either side of the stage, and energetic dance numbers provided by choreographer Stephfond Brunson and dance captain Lauren Puente, we get an enveloping, throbbing dynamism not unlike Carmina Burana.

The musical also appears to have been influenced by director William Dieterle’s 1939 movie version. Liam Fitzpatrick may not look like Charles Laughton, but his solo numbers, like “Heaven’s Light,” seize what Searor has identified as Hunchback’s center.

As Frollo performs in 10 musical numbers, Bob Brown’s appearance in that role is almost a co-lead rather than a mere supporter. In a refutation of his usually exuberant persona, Brown delivers a hiss-worthy villain for the first time.