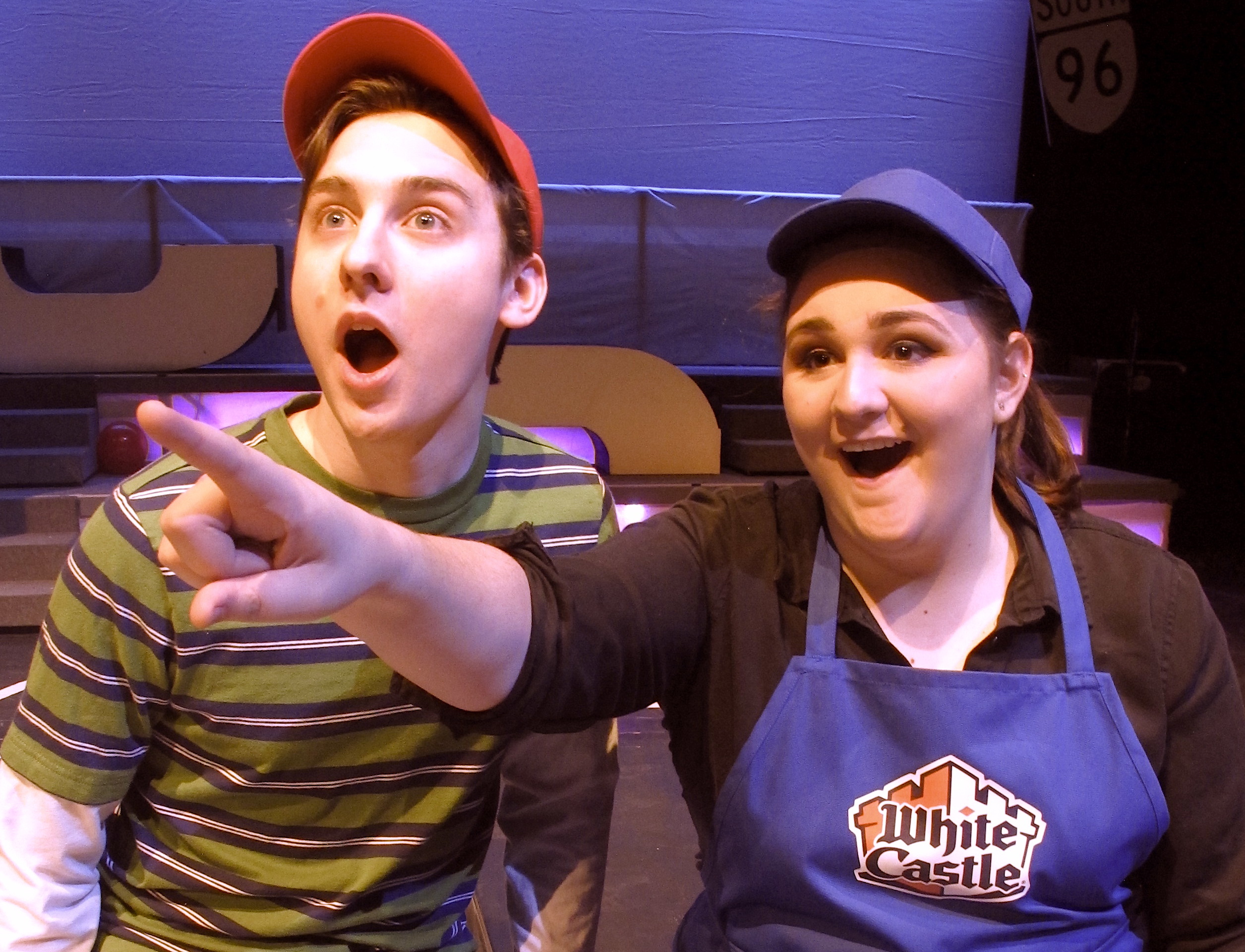 We often try to get our grip on the deeper nature of the United States by reading compellingly written lives of leading citizens. Consider Benjamin Franklin’s Autobiography or Barack Obama’s Dreams From My Father. Or the essence of such stories may be distilled in fiction. The promise of zooming from social bottom to the top in Horatio Alger’s Ragged Dick (1868), although little read today, lurks in the phrase the “American Dream” and populist discontent.

So it is with Peter Sinn Nachtrieb’s absurdist comedy Bob: A Life in Five Acts, running through Saturday, Feb. 17, at Le Moyne College. Bob is told in a fortune cookie that he is destined to be a “great man,” so he sets out to achieve that goal. Why “Bob”? At one time it might have been “Joe,” as in “ordinary Joe” or “G.I. Joe.” Maybe it was Bill Murray who moved the needle with the 1991 movie What About Bob? The last Bob to run for president, Sen. Dole from Kansas, was an unpretentious man of notably plain speech.

Playwright Nachtrieb, who favors witty and allusive speech, has been building a reputation over the past decade. His better-known Boom appeared in 2011 at Ithaca’s Kitchen Theatre Company, a trendsetter in these parts. Bob won prizes when it opened at Louisville’s Humana Festival of New American Plays in 2010 and has been performed extensively.

It is an unusual choice for a college company, however, with only one named role, the lead Bob (Alex Leblond). There is also a “chorus” of five players taking on many roles, as they get a constant workout changing identities, genders and even species. The most recognizable face is Fred Pienkowski, who played the womanizer in last year’s Boeing, Boeing, and the other performers are Maggie Flower, Kit Kuebler, Jean-Luc Saliva and Milanne Wischmeyer.

Nicole Ablan’s set underscores Bob’s thematic ambitions. On the floor of an in-the-round configuration we have a white outline map of the 48 contiguous states, with highway signs that read “one way” and “right turn.” The tone is welcoming, as several cast members are strumming ukuleles. There is also a projector announcing the ends and beginnings of what are called “acts,” and lots of illustrations of what Bob sees.

Bob is born unexpectedly in the bathroom of a White Castle in Louisville, Ky., when his mother Helen, unaware that she is pregnant, goes into labor. When we first see diaper-clad Bob, he still has an umbilical cord attached. It looks like a tube of unsmoked kielbasa.

A useful program note explains that when Nachtrieb was in Louisville for the Humana opening, he saw an ad in which White Castle declared itself a “safe space,” meaning it would accept unwanted infants. So he stuck that in at the last moment. This means that as madcap and random as Bob’s life adventures might appear, each episode comes with an unexplained significance. In another example, the youthful Bob waits at a rest stop named for William Burroughs, author of Naked Lunch.

The infant Bob is rescued by a waitress named Jeanine, who opens a fateful fortune cookie. Feeling that she must fulfill the cookie’s promise, she raises the baby and begins a trek around the country in her Chevy Malibu. Just as Bob decides to commemorate his dream on a plaque, Jeanine dies on the steps of the Art Institute of Chicago. Her last wish is that Bob burn her body right there, which he tries to do, until interrupted by a policeman who turns out to be Jeanine’s ex-boyfriend. The cop gives Bob a wedding ring intended for Jeanine, just as crazed birth mother Helen reappears to steal all of Bob’s belongings, including his pants.

Bob’s resilient optimism suggests a bit of Voltaire’s Candide amid the play’s twisting narrative. With the visuals we are reminded of the kitsch of roadside America. Since the 2016 election some of the tastes of redneck America have been politicized, but Nachtrieb is aiming at larger, permanent targets. At one point is a visual of a crowd protesting the destruction of the environment from single-use plastics; the image includes shots of John Wayne and Betty White.

Director Matt Chiorini makes Bob: A Life in Five Acts both breath-stopping and breathtaking. He helps us to see Nachtrieb as a smiling Eugene Ionesco, peppering the route to oblivion with sparkling gags.