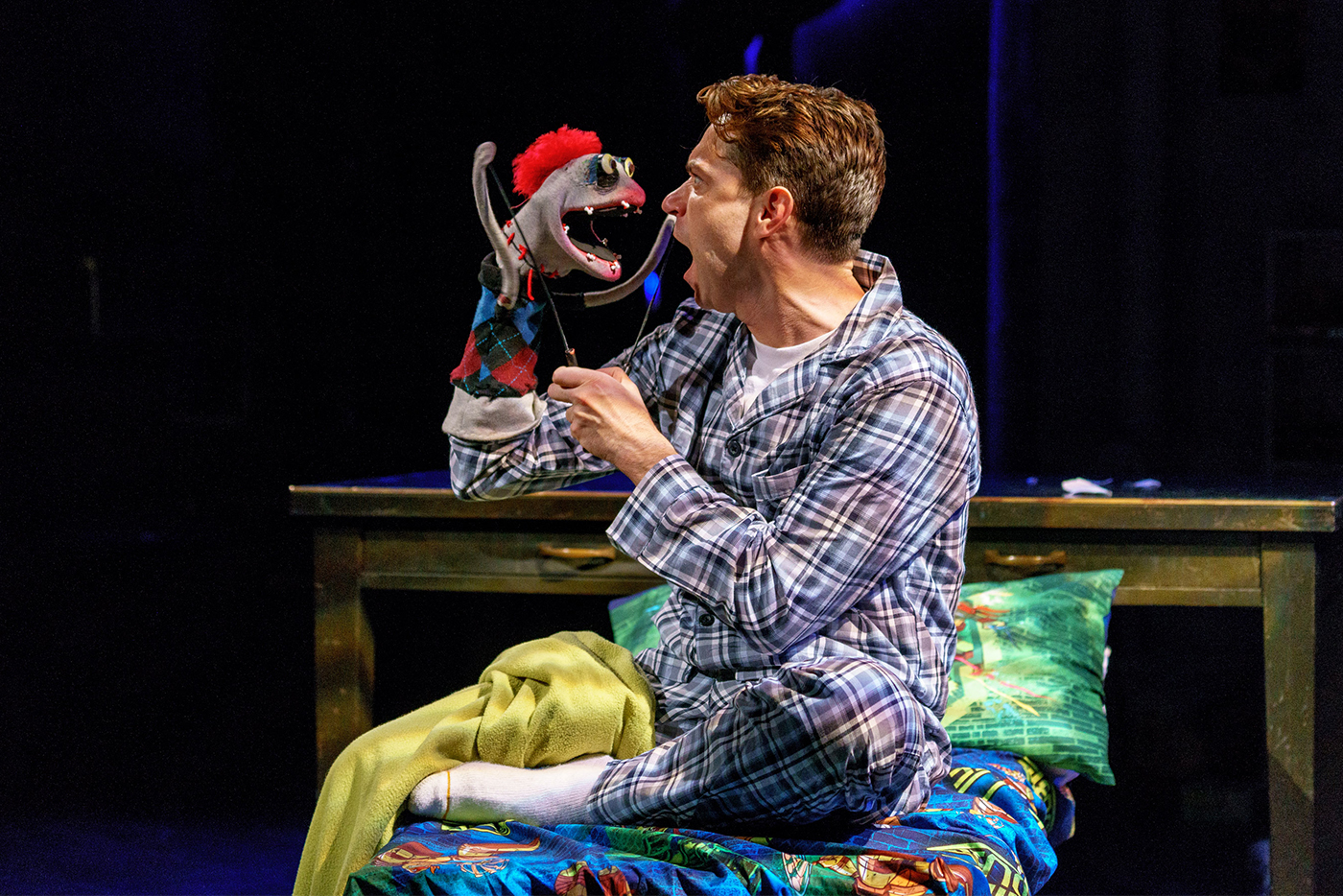 Comedic puppet keeps audience on its toes during “Hand of God.”

Texas-born playwright Robert Askins, 36, explains that his title, Hand to God, is a Southern regionalism fairly unknown in the North. It’s an expression about honesty. He could just as easily be talking about his own stagecraft.

Hand to God, running through Sept. 25 as the season opener for Ithaca’s Kitchen Theatre Company, starts out looking like a regional comedy — it’s set in an evangelical church basement in Cypress, Texas — with some elements of magical realism. Other familiar elements, like the puppets with libidos from Avenue Q, tempt us into thinking we know where the show is heading. But in the end Hand to God turns out to be exceedingly ambitious about philosophical and theological truth, the likes of which we’re not used to seeing.

Not that Hand to God arrives in the area without fanfare. The play was originally produced during a short run at the Ensemble Studio Theatre in October 2011, and then returned by popular demand the next year. In 2014 it moved to the MCC Theater, a larger off-Broadway venue, and then on to a nearly year’s run on Broadway in April 2015, receiving five Tony Award nominations, including for best play. If you’re a theater buff and don’t recognize the name of playwright Askins, there’s still a good chance that someone you know has mentioned episodes from the play.

In a prologue, a sock puppet we will later call Tyrone gives an expletive-filled origin story of the human race. Initially people lived in a guilt-free garden of sexual freedom, but things go wrong as the population grows and there is competition for resources. To explain bad behavior, someone invented the devil; people could remain “around the campfire” by excusing their bad behavior with the line, “The devil made me do it.”

This church has a portable puppet theater because many evangelicals use puppets to teach children biblical lessons and to shun the devil. That’s why attractive young widow Margery (Erica Steinhagen) is trying to motivate a class of recalcitrant teenagers to get into the action. Potential troublemaker Timothy (Michael Patrick Trimm) has a mother in Alcoholics Anonymous, while the other two, nerdy Jessica (Montana Lampert Hoover) and ultra-shy Jason (Karl Gregory), try to keep their heads down. Jason, we learn, is Margery’s son, and, yes, that sock puppet on his right hand is the same one who recited the ominous prologue.

Kent Goetz’s scenic design for the church basement might look banal and impersonal, but it is also a venue for sexual tension. Polite, middle-aged Pastor Greg (Aundre Seals) might be a model of decorum but he clearly has the jones for widow Margery. After she gently and reluctantly rejects him, she tears up the room in a fit. Hard-charging student Timothy is more direct, apparently sensing Margery’s needfulness. After her blouse is ripped open, they leave for an offstage tryst, with her seeming acquiescence.

During these episodes Jason’s hand puppet takes on a separate personality — Tyrone — requiring actor Karl Gregory to speak in two distinct voices. When Margery disapproves, Jason tears off his head, only later to sew it back on — with teeth. Tyrone also gives voice to Jason’s sweet feelings for Jessica and comes to her defense when Timothy harasses her.

In the second act a haughty Tyrone takes over the basement, puts his stamp on the walls and strews the place with mutilated stuffed animals and crucified dolls. The adults are unresolved on how to address the menace: Hire an exorcist or go to the police. Meanwhile, Jessica, sexless no more, introduces the puppet Jolene, resplendent with sizable breasts and a lusty voice. Her love scene with Tyrone exceeds the one in Avenue Q, but is dismayingly frightening.

Ultimately, the sock puppet gets the last word. Tyrone ridicules the audience for wanting to see him again, and that humanity has sacrificed the sweet and the innocent to make him go away. Looking for a savior may take you to the place where the devil had just been.

Artistic director Rachel Lampert, beginning her last season at the Kitchen, is in top form in channeling the quicksilver changes of tone. She has cast two company favorites, Karl Gregory and Erica Steinhagen, to move quickly within protean and volatile characters. And she pulls the best out of returning pro Aundre Seals and newcomers Montana Lampert Hoover and Michael Patrick Trimm.

Often in Hand to God you don’t know whether to laugh or gasp, and then you do both in split-second succession.