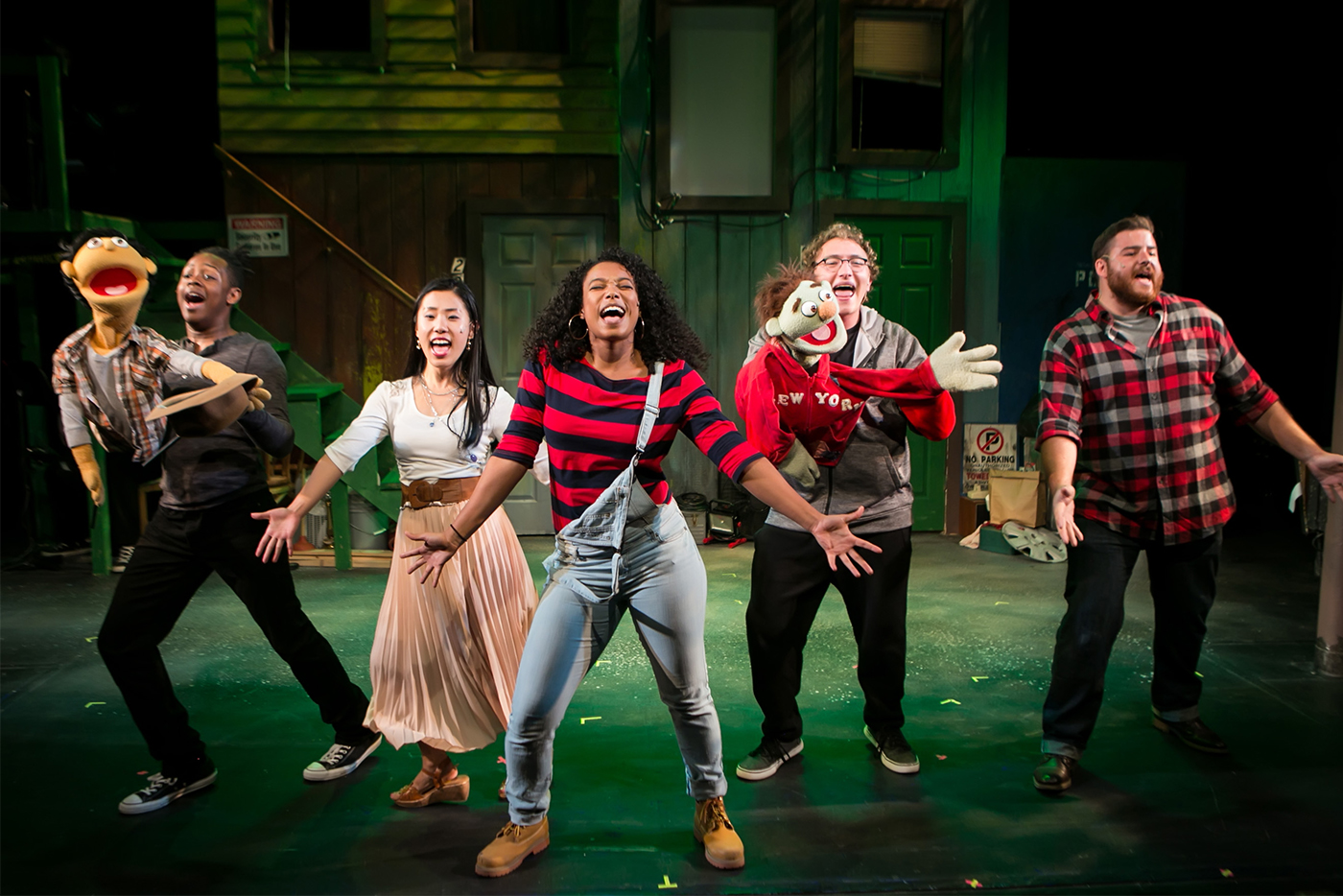 The Redhouse Arts Center, we see, is bigger than the man. The abrupt departure of previous artistic director Stephen Svoboda in July could have been mistaken for an earthquake. He was the hardest-working stage director on the Syracuse New Times beat, characteristically running two mammoth productions simultaneously.

Thus the first thing that is striking about the new Redhouse production of the Jeff Marx, Robert Lopez and Jeff Whitty musical spoof Avenue Q (running through Oct. 1) is that it looks like something that could have been delivered last season.

Guest director Kate Sullivan Gibbens, invited up from Austin, Texas, never met Svoboda and thus unbidden approximates his manic pacing. She pulls out polished, disciplined performances throughout. Her staging of the celebrated X-rated love scene between the puppets Kate and Princeton blows out all the barriers. (Extra applause for Sarah Nolen and Elise Shuford as the show’s puppetry consultants.)

Gibbens does, however, tend to brighten the despair of such show-stopping early numbers as “It Sucks to be Me.” And by casting powerhouse Equity player Briana Maia as the hapless Gary Coleman, still only the building superintendent after having fallen from celebrity, she reduces the pathos implicit in the overall premise of the ruination of great expectations.

Without ever violating copyright restrictions, Avenue Q, the surprise Tony Award winner of 2004, presumes that audiences have grown up with the hopeful ethos of the PBS children’s series Sesame Street. It taught that each of us is unique and special, that we should tolerate all differences in culture and race, and your expectations in life should have only the sky as a limit.

This honey-flavored dream might be nurtured in some liberal downtown enclave, perhaps Greenwich Village, but how far uptown would we have to go where reality has placed us now? Avenue A? Avenue B? No, much farther away, say Avenue Q.

Avenue Q is a ground-breaker not just for upending the shared experience of a popular television program or even for the employment of two- and three-stick puppets. Instead, it is the wry celebration of disillusionment and disappointment. The defining musical number comes early in the first act when an unemployed liberal arts graduate named Princeton (LeRon Grant) sings “What Do You Do With a B.A. in English?” Grant, who has taken smaller roles in earlier Redhouse productions such as Carousel and Ragtime, scores high with nuance in this move to a lead role.

Some other characters support the show’s larger theme without relying on an antecedent in public television. Take the hopeless would-be stand-up comic Brian (Ben Sheedy), who tells jokes the way Florence Foster Jenkins sang, and his equally loudmouthed wife Christmas Eve (Junko Yasuda), who wants to be a therapist but her bossiness and contrariness drive away all patients. Finally, there’s the scene-stealing voluptuary Lucy the Slut, for which Kathleen Burke Egloff purrs out her best Mae West.