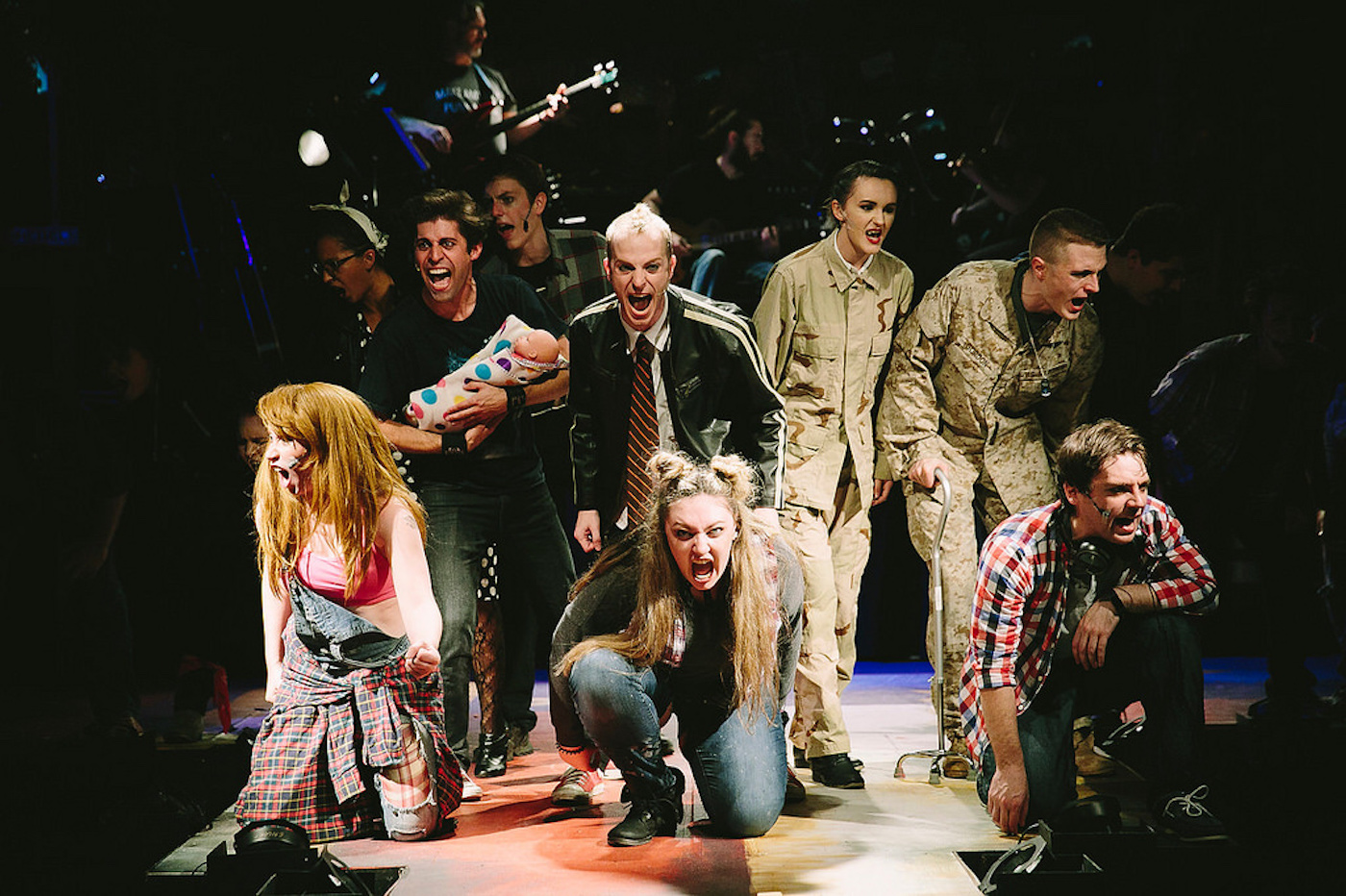 Central New York Playhouse’s production of Green Day’s punk opera American Idiot, running through Aug. 5, breaks the mold. In a reconfiguration of the company’s tight space, set designer Christopher Lupia and director Liam Fitzpatrick now feature a 20-foot thrust runway so that more of the audience is closer to the action.

All the innovations support director Fitzpatrick’s goal of breaking American Idiot away from its original time slot. Green Day’s concept album appeared in September 2004 (the Tony Award-winning Broadway show premiered in 2010), when it was clear that the invasion-occupation of Iraq was by no means an accomplished mission but that George W. Bush would be re-elected anyway. One character, Tunny (Nicholas MacLane), dons a Marine uniform and is sent into battle, where he loses a leg. He’s attended by Extraordinary Girl (Morgan Williamson), whose comfort extends to love.

Those TV monitors bring us to the present. As the action begins we see NBC’s Chuck Todd interviewing Kellyanne Conway as she burbles the top quote of 2017: “We have alternative facts.” Loops and snippets continue throughout the 100-minute action, with ads for Chia Pets preceding the soothing but toxic bromides of Pat Robertson. Although there are occasional stills of what might be classed as video, nearly all of the rest, deftly collected by Isaac Betters, runs on the tube every day. Green Day’s Billy Joe Armstrong and Michael Mayer are telling us that the rage of the punk movement, far from being nihilistic, assails inauthenticity.

Action begins with nearly the entire company, dynamically choreographed by Sami Hoerner, in the title number, “American Idiot.” They are overcome with suburban anomie in Jingletown, USA, reprising what earlier generations felt was bourgeois emptiness. The voice that quickly emerges is that of Johnny (Mike Gibson) in a trim blond Mohawk. He bills himself as “Jesus of Suburbia” in the second number.

Much of the success of American Idiot relies on the tender-angry persona that Mike Gibson as Johnny brings to the production, and his expressive powerhouse vocals. Well-known locally as the front man for the rock group The Action! for more than 18 years, Gibson has long been absent from the dramatic stage. But he hails from a distinguished lineage: His sister is Katie Gibson, a multi-winner with the Syracuse New Times Syracuse Area Live Theater (SALT) awards.

Doing much of the heavy lifting, Gibson solos or leads in many of the show’s most affecting numbers, including the rock blasts “Holiday” and “Boulevard of Broken Dreams” but also the plaintive “Wake Me Up When September Ends.”

Johnny is part of a trio, which includes Tunny, wounded in Iraq, who nonetheless has several important numbers, starting with the despairing “City of the Damned.” Nicholas MacLane, as Tunny, is blessed with clean-cut, leading-man good looks, which may be why he’s so effective with the most downbeat of musical numbers, like “Before the Lobotomy.”

The third member is hapless Will (Tyler Ianuzi), whose girlfriend Heather (Natasia White) is pregnant without any plans for coping, as she tells us in “Dearly Beloved.” Johnny borrows money and bus tickets for escape, but Will, in a wordplay reversal of his name, collapses in on himself. For much of the action he remains on a shabby couch at stage left, immobilized by drugs, alcohol and jacking off, even as his voice rises to blend with the others.

Johnny’s love interest is a reversal of boy-meets-girl conventions. After dosing himself with drugs, he sees a beautiful woman whom he calls Whatsername (Hannah Weiler). They make love, and he sings “When It’s Time,” the most tender number in the show. Johnny’s descent into drugs, however, has surpassed recreational use, and he turns on her with a knife. Her message of departure is in the poisonous number, “Letterbomb.”

American Idiot’s major scene-stealer is Josh Taylor, in a red and black fright wig, as the Satanic drug dealer St. Jimmy. Lyricist Billie Joe Armstrong took this role on Broadway, and SALT-winner Taylor, the most experienced member of the cast, gives what might be the best performance of his career: appalling and mesmerizing. In Whatsername’s departure, she sings that St. Jimmy is a figment of Johnny’s father’s rage and mother’s love.

Breaking the mold means American Idiot is unlike any community theater production seen before.