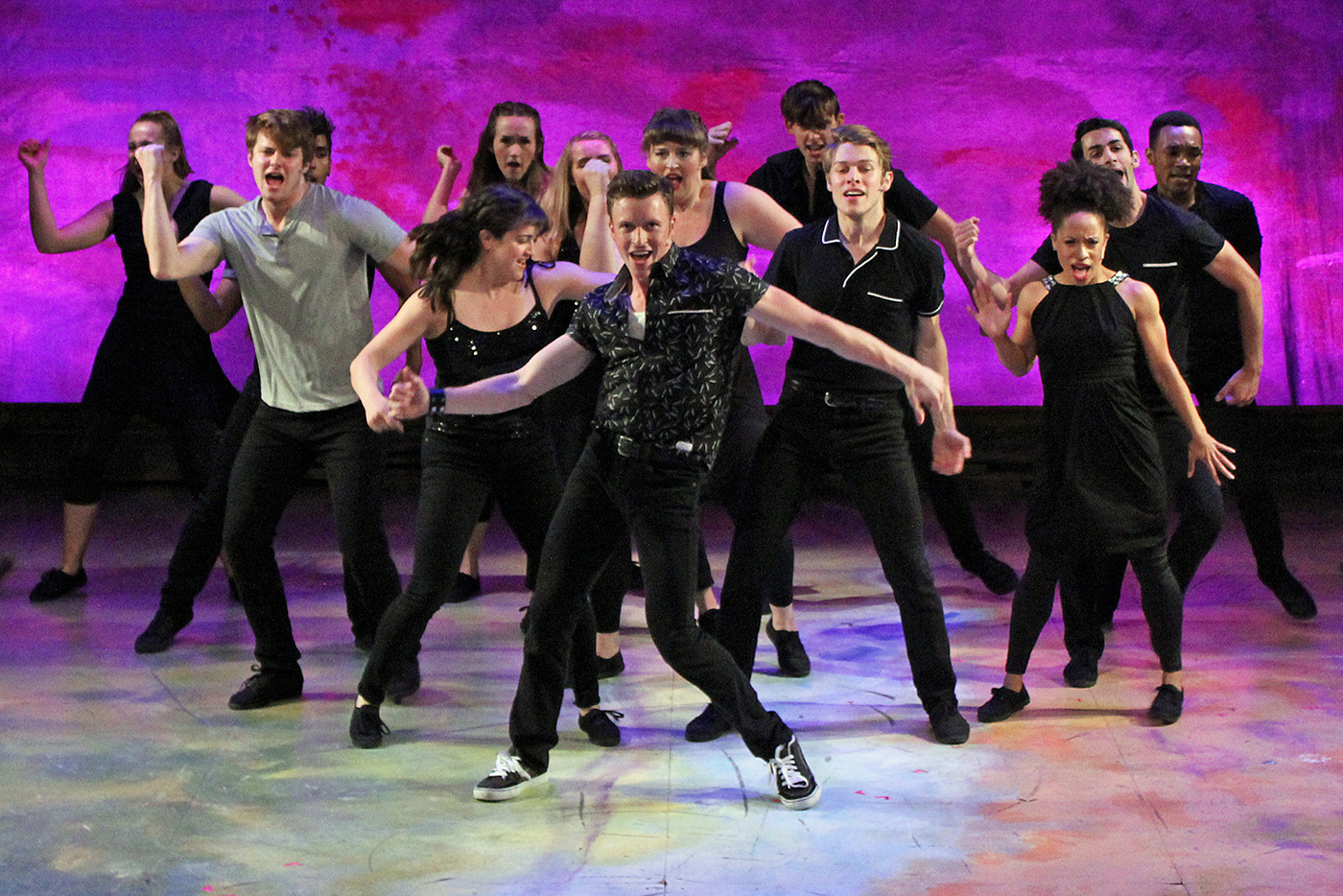 Most audiences remember without prompting that the 1998 Dean Pitchford and Walter Bobbie musical Footloose is an adaptation of the 1984 Kevin Bacon movie. A city slicker arrives in a small town that has banned dancing, wins over the authority figures, and all ends happily.

In the exuberant production now running through July 29 at Cortland Repertory Theatre, it feels instead like an uncredited rewriting of the much earlier musical Bye, Bye Birdie, except that the parents are no longer star-struck. At a time when the opioid epidemic is ravaging small-town America, it’s comforting to remember that the greatest threat to the Protestant order was once imagined to be rock’n’roll.

Despite the resolvable tension in the plot, the central story could be mistaken for an early legend or folktale. Ren McCormack (Dan Lusardi), a handsome, blond youth who loves music, arrives in a repressive burg and has to engage in a contest with the local power center, Rev. Shaw Moore (Michael Jones), in order to win his daughter, Ariel (Haley McCormick), a beautiful princess. Along the way he dispatches a bully, Chuck (Aaron Jacobs), and befriends an amiable hayseed in one-strapped bib overalls, Willard (Phil Sloves), who quickly morphs into a reliable comic sidekick.

As this is a musical, necessarily about dancing, we must be introduced to two hosts of supporting players, none of whom become especially rounded but provide segues in how the musical numbers will proceed. One team is made up of elders, starting with the reverend’s sympathetic wife Vi (Ms. Jeremy Parker), coach Roger Dunbar (Tanner Efinger) and his wife Eleanor (Lilli Komurek), as well as the one comic adult, school principal Harriet Clark (Nancy Kane). Additionally, Ren’s mother Ethel (company favorite Rebecca McGraw) can sing with the elders. They establish early that the reverend and his cohorts are not the harsh faces of the Christian right, heirs of Puritanism.

Instead, they are only thinking of public safety, after dance-loving youths followed a night of boozing and rocking with smashing their car on a bridge, killing them all. So the second number in the first act, “On Any Sunday” links the reverend, Ren and Ethel. Soon Vi, Ethel and even Ariel support the prevailing ethos in “Learning to be Silent.” Long before we get to the inevitable confrontation, we are encouraged to align with the reverend’s anxiety in his heartfelt solo, “Heaven Help Me.” And the thematic center of the show comes with Vi’s solo, “Can’t You Find It In Your Heart,” with actress Parker seizing the moment.

Meanwhile, the majority of the 25-person cast is mobilizing for what looks like a youth rebellion. Comic relief Willard travels with a bumptious girlfriend, Rusty (Helen Regula), who comes as part of a trio of singers, along with Urleen (McKena Silva) and Wendy Jo (Caiti Marlowe), a small-town white version of The Supremes. We hear what they can do in the first act’s “Somebody’s Eyes.”

Like many shows based on movies, there are many abrupt changes of scenes when we, in effect, jump cut between the kids and the elders. Director Mark Reynolds, a SUNY Cortland faculty member, and scenic designer Scott Holdredge have adroitly dealt with this issue. They place four screens upstage at oblique angles, on which the images change in an instant. In the Moore home we have a shot from outside and another in the reverend’s study. At the high school we see a row of yellow lockers and one close-up of a combination lock. This leaves most of the stage wide open for the many dance numbers, exuberantly choreographed by Clare Cook.

Overriding the cultural politics is a love story, well-served by attractive and talented leads, Dan Lusardi and Haley McCormick. Neither has appeared in Cortland before, and both have come north for this production from North Carolina’s Elon University, also a major pipeline for the rest of the cast.

While Lusardi never intends to mimic Kevin Bacon, he’s slight and open-faced, the perfect hero to send against a bully. He’s also a light-footed dancer who can leap like a gymnast. He triumphs in his two big solos, “I Can’t Stand Still” and “Dancing is Not a Crime.”

As the free-spirited Ariel (the name is from Shakespeare’s The Tempest), McCormick has begun her rebellion before Ren arrives. She makes this evident early on in her brassy version of “Holding Out for a Hero.”

Despite being nominally a rock musical, Footloose draws from five different composers (including Kenny Loggins, Eric Carmen and Sammy Hagar), well-served by music director Christopher Blasting. The vibrant score could have pleased Alan Lerner and Frederick Loewe in their heydays.