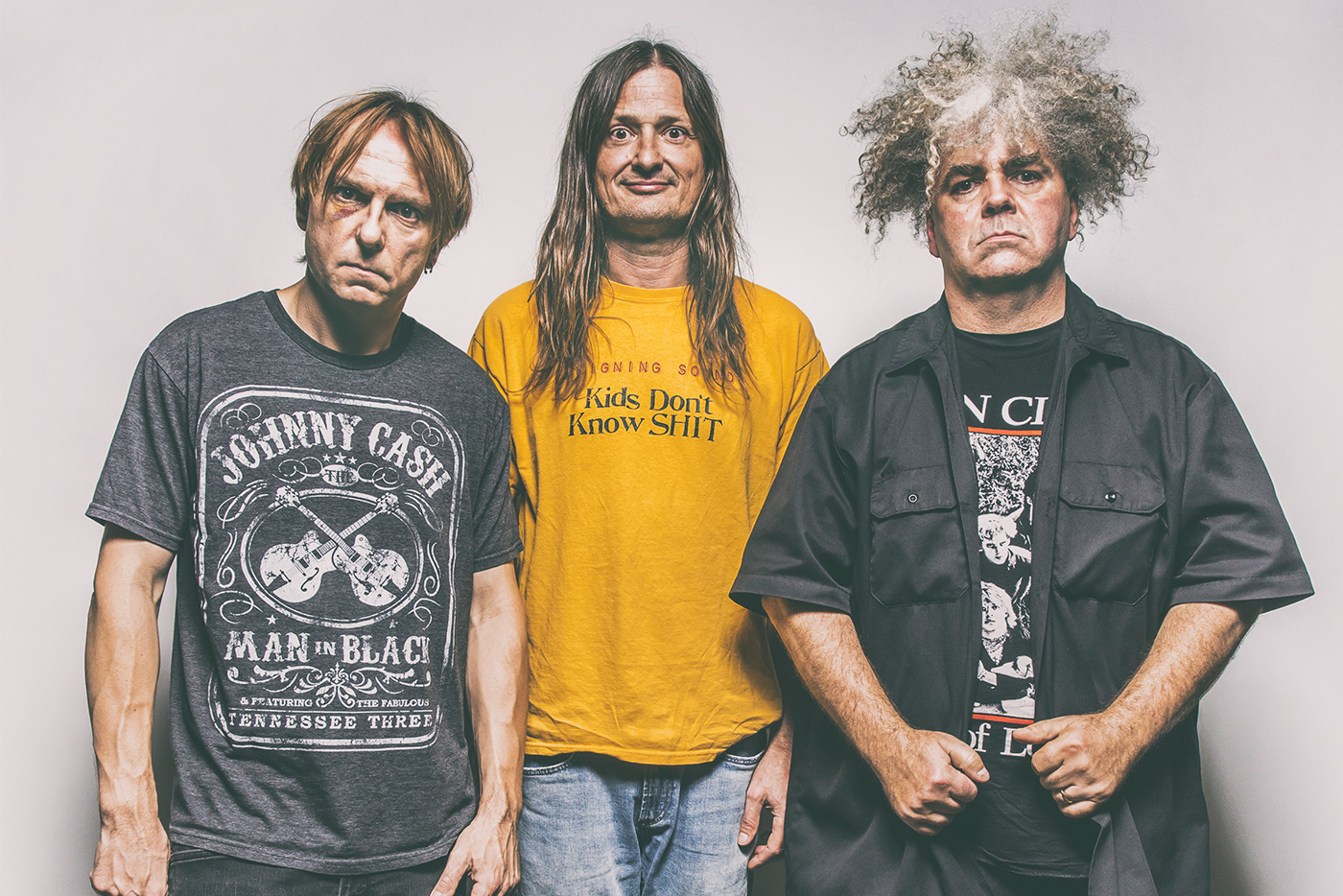 The Melvins’ Buzz Osborne gets candid about his experience in the music industry.

The Melvins’ 30-plus-year career proves they’re doing something right. The band boasts a distinctive sound, attitude and work ethic to stand out amid a very congested music world.

Buzz Osborne, with his voluminous gray head of curls, and his cohorts Dale Crover and Steven Shane McDonald will perform Tuesday, Aug. 1, 9 p.m., at the Westcott Theater, 524 Westcott St. Tickets are $20; for information, call (315) 422-3511 or visit creativeconcerts.com.

During a July 7 phone conversation with Osborne, dogs barked in the background, water ran from the faucet and there was the sound of plates brushing against each other. Osborne’s home also serves as a creative space for his wife Mackie, an artist, musician and yogi. Her eye-catching artworks have adorned album covers for several bands including The Melvins, Tool, Social Distortion, Circle Jerks and The Vandals. The two recently celebrated 24 years of marriage.

The interview date also marked the release of The Melvins’ first-ever double album, A Walk with Love and Death. It was issued through Ipecac Recordings, which was founded in 1999 by Greg Werckman and Mike Patton (Faith No More, Peeping Tom). The Death half of the LP offers a slew of new material that adds to the band’s latter-day melodic efforts. The Love half features tracks of new noise, and it also serves as a soundtrack to an unreleased short film.

Why release a double album now?

Well, it’s high time, I suppose. The two albums are completely different from each other. We wanted to write and record a soundtrack and then one that was regular. When you’re buying it, you’re buying two different albums. It’s cool.

You’re from Washington state. The Melvins tap into and blend grunge, hard rock, sludge and other genres. You’re also a punk rock guy. How has punk rock changed for you?

My thoughts and attitude haven’t changed at all. If anything it’s gotten stronger. I like about as many bands now as I ever did. I don’t like the pop-punk stuff, you know, the Green Day style of whatever is happening now. Although I do like The Dickies, The Descendants, The Ramones and all that type of stuff.

Does the vastness of the internet help or hurt the scene?

I’m sure it helps. It’s easier to get your band out there now. But I’m not a good-ol’-days type of guy, either. I’m more of a what-have-you-done-lately type of guy. What we’ve done lately is a double album with a soundtrack for a movie. Boom!

We had an idea of what would work a long time ago, and we’ve just expanded on that. It’s nice to know I wasn’t wrong about any of it.

What are your thoughts on the political climate?

I don’t see anything different between any of these people. It’s total idiocy. If people want to believe Democrats are the saviors of this world, they’re out of their minds. But if they think it’s the Republicans, they’re also out of their minds. There’s enough blame to go around. I just stand back and watch people go crazy.

LA Weekly produced a great video about you, Mackie and your shared creative space. You said you prefer a stimulating atmosphere. Aside from your home, what else inspires you?

Music in general. Life in general. I can get inspired just driving through town. Inspiration is such an odd thing to conceive. I don’t draw it from any one place.

I’ve gone to giant companies or somewhere people are working and they’ve looked like some of the most oppressive places I’ve ever seen. I don’t get how you’re supposed to be creative in those circumstances. It’s a fuckin’ job. I strive to make my living in an unconventional way. I work harder at what I’m doing more than most people do at just earning a living.

It’s impossible to become successful or rich only working 40 hours a week. Someone put those constraints on your brain, and you’re going to be a mediocre person the rest of your life. This is your workday. This is your weekend. This is your vacation. Fuck all that.

If people believe there is a CEO of a corporation in charge of 20,000 employees and works only 40 hours a week, they’re out of their fucking minds. You’re talking to a guy who did 51 shows in 51 days, every state in the United States, plus Washington, D.C. Under normal working conditions, that wouldn’t be allowed. I don’t need some union rep telling me when I can or cannot work. If I had those restraints, I’d be here with nothing.

Millennials have been stereotyped with a certain attitude toward work in that they may refuse work because they don’t want to or don’t have to.

You don’t have to do anything. Hopefully with that attitude, you’re planning on inheriting a lot of money. The rest of us have to make a living. Just because someone is paying your salary, it doesn’t mean they owe you anything. I know very little, but I know that. So yeah, that’s my work ethic. I never stop. I don’t really take holidays. I don’t really understand weekends, either.

How have you dealt with criticism about the lifestyle of a musician?

People assume that I’m fabulously wealthy or I have nothing. There’s no in-between or it’s not possible to be a working-class musician. Well, I’ve succeeded in doing things that weren’t possible my entire life. I embrace everything that’s out there, whatever it may be. Don’t worry about the things you don’t have control over. That’s my attitude toward everything.

If you want to buy anabolic steroids, I don’t see why you shouldn’t be able to on the open market. If they did, all those prices would come down. If you want to take that crap and destroy yourself, how is that my business? That’s on you. I’m not going to take that crap whether it’s legal or not, unless the doctor tells me it’s OK.

I can go buy a gallon of tequila and drink myself to death and there’s nothing illegal about that. How is it that I cannot buy eye medicine without having a prescription? They legalized marijuana, but I have to have a prescription to buy antibiotics. Alcohol and marijuana are considered fine?

The world is not a perfect place; it’s only a series of compromises. I’m not going to make commercial-sounding music as far as what the public wants. The tradeoff is the general public isn’t going to like what I do. But with that comes a massive amount of freedom where I can still do what I want and make a living off of it, because I have those convictions.

What’s your take on major and independent labels and if they affect creative freedom?

I didn’t have that experience on a major label. They basically said, “You do whatever you want. We like what you’re doing.” And we turned in those records, covers done and then mastered. They didn’t even know where we recorded. Had I gone to them and said I want to sell millions of records and want you to help, they would have been more than happy to help and still would have allowed us to do whatever we wanted.

I don’t think there is anyone to blame other than the bands themselves. It was their big shot to become super-successful. They wanted to be millionaires and they wanted to have the label help them do that. I’m not opposed to success on that level at all. I’m just not going to pretend to be someone.

Johnny Rotten (Sex Pistols), who is absolutely one of my heroes, said something when he was in Public Image: The second when labels start to dictate is the second we cease to function.

When the bands sit back and let their success happen, it’s by design. And then they complain about the music industry? They were the ones to sign the contracts.

How about your experience with Atlantic Records?

We knew when we went on a major label it wasn’t going to work on the scale that they may have thought it was going to, but we knew we would be in a better place than when we started. It would be a weird journey that would maybe last one album, but we did three albums. I figured they would have dropped us after Houdini (1993, co-produced with Kurt Cobain). That didn’t happen. Miracles never cease. If that contract with Atlantic was laid in front of me today, I’d sign it again.

The labels are only there to make money. That’s the point. And this idea extends into indie labels as well. Just on a monetary level, an indie label that doesn’t pay a band is a much bigger rip-off than a major label that never pays a band, because you’re getting a huge advance with a major label. With an indie label, per dollar invested, is by far the biggest rip-off. They pay you shit and they won’t give you anything when the record sells. They’ll just never pay you and then go out of business.

But there was no golden era when bands got money from their labels. I think guys like Bo Diddley never got a nickel, and that’s back when people bought records.

You’ve had interactions with Soundgarden’s Chris Cornell through the years and he praised your work. How has his death affected you?

It’s horrible. I’ve never claimed to be an expert in mental illness or anything along those lines. It’s a mystery to me why that happened. Plus, the toxicology report said he wasn’t really on anything of any level that would make this feasible. Who knows? There really wasn’t any reason to believe he was depressed or anything weird.

I also don’t want the state of my mental health to be in the hands of a government official. That’s for me and my family to deal with.

How is it living and working with an artist?

It’s very intense at our house. We’re both very headstrong people, but we give each other a lot of space. The key to any marriage is not living in each other’s pockets. I’m gone at least four or five months a year. She knew the job was dangerous when she took it. That hasn’t been a problem. We understand how it works between us. We’ve never had a regular nine-to-five job. There’s a lot of hustling going on.

You have a ceiling of toys. Were some of them featured in your video for “Electric Flower”?

No. Those belonged to its director, Mark Brooks of the Warlock Pinchers.

(The ceiling) was a lot of hard work. I was up for the challenge and just did it in about a year. I was a quarter of the way through and it dawned on me that I had to finish it. I like work like that. It required a lot of energy but doesn’t require a lot of straight lines.

And you both love dogs. Do you work with any rescues or nonprofits?

We’ve done a lot of dog rescue stuff, but neither of us think we can contribute enough time to something like that. We’ve done our part by harboring a lot of dogs for a long time.

We’re down to two right now, but we’ve had as many as five. Three have died, and two we’ve had to put down because they’d gotten so old. I’d rather have it that way than have them accidentally be killed. You can prepare to have them put down. Dogs do have dignity. When they can’t stand, walk and be able to go to the bathroom, there isn’t much you can do. It’s horrible, but you see them through to the end.