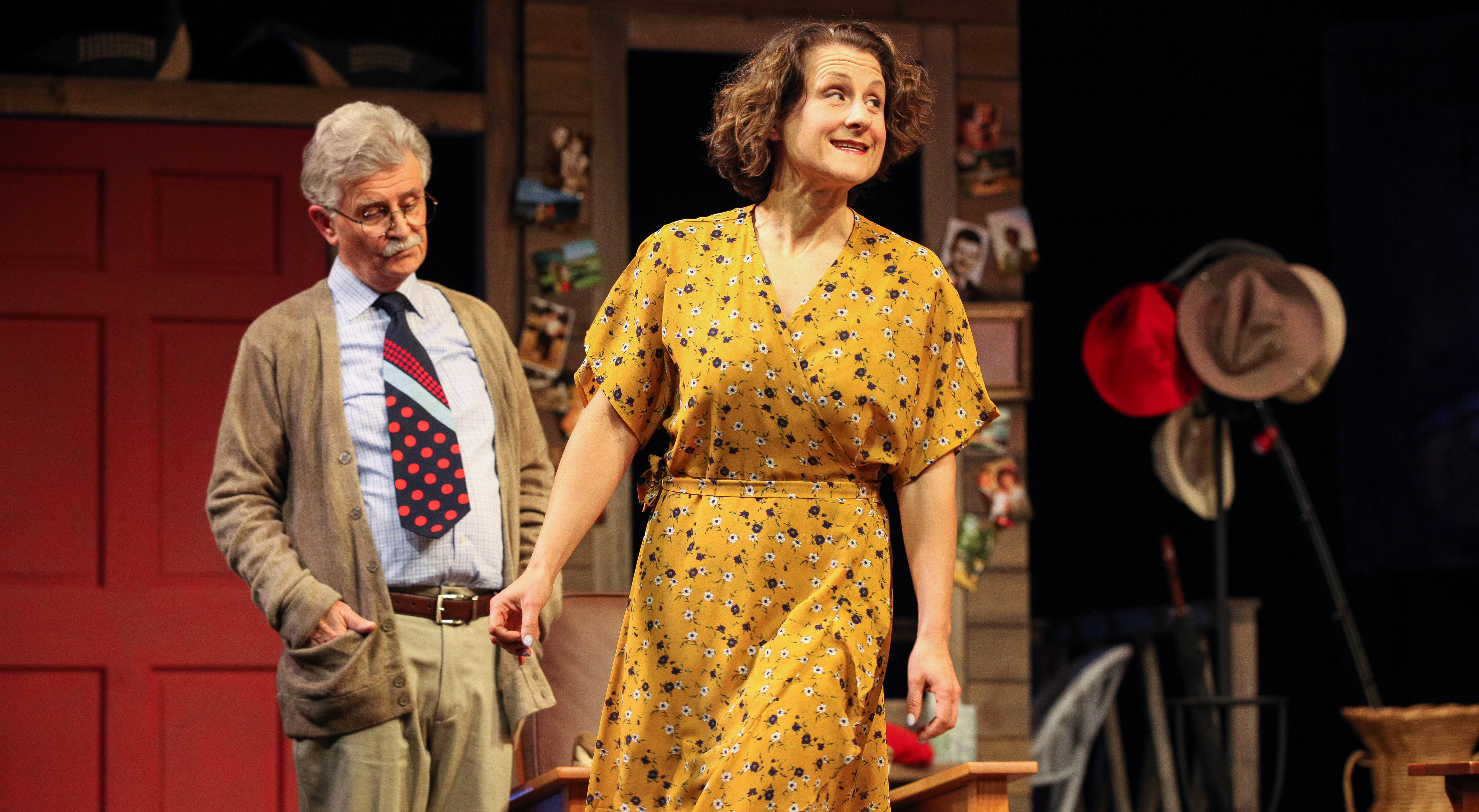 An unexpected loud clatter punctuates the opening scene of Ernest Thompson’s domestic comedy On Golden Pond, running through Sunday, March 18, in the brand-new Redhouse at City Center space. Querulous retired English professor Norman Thayer Jr. (Fred Grandy) is opening his summer retreat in Maine when, crack! the screen door falls off its hinges and slams on to the porch.

This caused a moment of concern for Redhouse fans during opening night: Just five weeks earlier the place was covered with grit, and you had to wear a hard hat to take a step. But no, the falling door is in the script, symbolic of Norman’s fears of decrepitude, and the entire performance is flawless, technically and artistically.

Familiar and undemanding as On Golden Pond is, it easily commands our attention. Prime, of course, is the presence of former TV star Fred Grandy in the lead. According to reports, director Vincent J. Cardinal had connections to Grandy, and this was a vehicle the actor preferred.

If there’s a laugh to be mined in a subordinate clause, Grandy can seize upon it. Any playwright who thinks “suck face” is a worthy synonym for “kiss” will never be confused with Noel Coward, but Grandy consistently makes Thompson’s dialogue sound better than it is.

The hilarity moves Norman Thayer away from the ways he has been portrayed elsewhere, specifically Henry Fonda’s incarnation in the 1981 movie version. The bright wit draws away from Norman’s sense of uselessness at turning 80. He contemplates following a want ad to put up circulars in order to feel needed. Or his frequent meanness, as this exchange with his daughter’s stepson Billy (Justin Dunn). Norman: “You should meet my father.” Billy: “Is he still alive?” Norman: “No, but you should meet him.” Such bile is coupled with some Archie Bunker-ish ethnic slurs, startling from a retired Ivy League academic.

As with the film, however, Norman’s daughter Chelsea is played by Grandy’s real-life daughter, Marya, a Yale Drama graduate with extensive professional credits. Whereas Jane and Henry Fonda had a famously prickly relationship, Marya is an ideal daughter who dedicates her performance to her parents. The on-stage parents charge that Chelsea has a chip on her shoulder, conveyed in body set rather than words. There may be some sparks, but the father-daughter reconciliation comes with relatively little pain.

There is more tension between Norman and Chelsea’s boyfriend, the divorced dentist Bill. He is played by John Bixler, the only Redhouse veteran in the cast, and is excellent as always. Bixler’s Bill stands his ground and exhibits no desire to be liked. Bixler is a veteran Equity player who works everywhere, but it is reassuring to see someone who is almost a resident player be the peer of invitees for the gala opening of the new theater.

Michael J. Farina brings a certain degree of pathos as well as an authentic state-of-Maine accent to Charlie the mailman, the local boy who pined for Chelsea in their youth but could not attain her.

On Golden Pond is such an intimate family drama it might have fit snugly in the Redhouse’s old Armory Square venue but gains authenticity here. Scenic designer Tim Brown, long with the company, has more than twice the space to work with, allowing for the clutter and neglect resulting from the living room’s winter absence. Characters now shout to each other from a distance, as they do in life. A flight of stairs leads to a second floor, and we can presume the pond of the title to lie outside the window. Lighting designer Marie Yokoyama leads our eye to a stuffed deer’s head above the players’ sight lines, and sound designer Anthony Vadala makes sure that no wordless gasp or sigh escapes our attention.

The new larger theater retains some of the directness of the previous venue. The audience may be farther from the action, but there is no proscenium arch, no curtain to rise or fall. We feel we are almost in their space. Seats in the new larger theater, now called the Austin-Allyn, can be reconfigured to accommodate a larger audience but now holds about 350.

The theater is named for Laura Austin, founding artistic director, and Scott Allyn of Skaneateles, who were with the Redhouse from the previous opening in 2004 and took active roles in the highly successful fundraising. From the looks of this opening production, there will be plenty of reasons to go there.