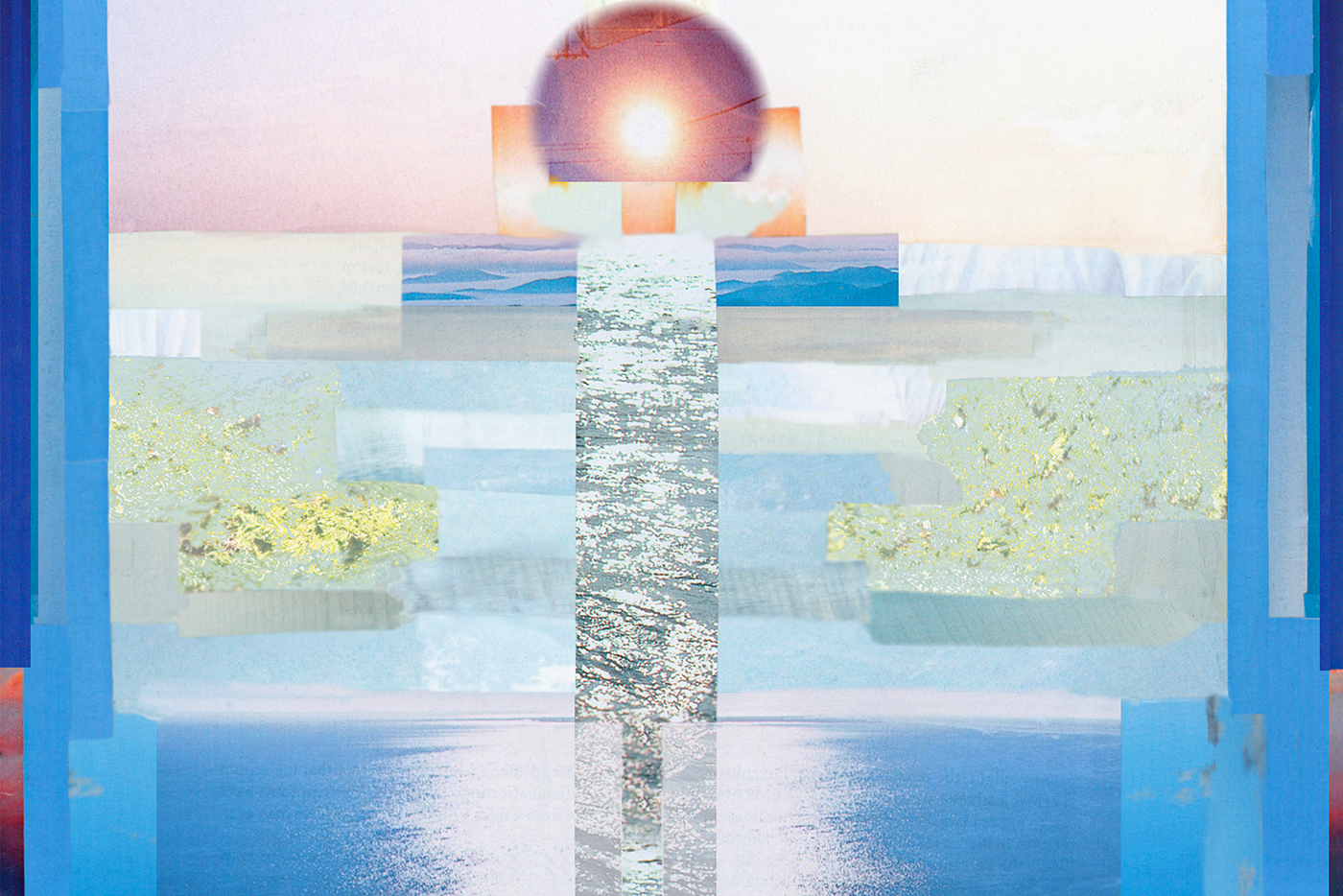 The Edgewood Gallery’s current exhibit, The Spirit of Color, encompasses several media and artistic approaches. Indeed, the show presents Nicora Gangi’s paper collages and enhanced prints that reflect her daily meditations on the Bible, an array of ceramics by Miyo Hirano, and Dana Stenson’s metalsmith jewelry.

The exhibition displays recent work by Gangi, best known for her pastels and oil paintings. The current pieces spring from her experience with synesthesia, a sensory phenomenon in which a person finds that reading certain words or numbers inspires visual or auditory impressions. For one individual, specific numbers recall music. For another, colors are associated with certain words.

The artist’s statement indicates that Gangi draws on her experience, jotting down visual details on a sketch pad and ultimately cutting up magazines in the process of creating the collages.

As might be expected, those works are dramatically different. “Meditation #5,” for example, is small and sparse, depicting the outline of a room, with a tiny light in a corner. A large enhanced print, “Psalm 15,” combines several elements: blue borders and a long vertical pattern topped by a globe-like object containing a light, what appears to be vegetation under water.

In other pieces, Gangi uses multiple approaches, moving from “Psalm #4,” with orange and blue colors and clouds, to “Meditation #4,” featuring green patterns and red geometric forms. In “Psalm 40a,” one of the best artworks in the exhibit, she mixes orange shapes, blue color and an entrance or hallway. And “Meditation #7” wraps swatches of gray around a cosmic scene.

The collages shouldn’t be viewed as somehow distinct from Gangi’s other works. In the past, she’s created pieces with a subtle interplay of light and shadows, embraced the joy of a hillside in Italy, and communicated a somber mood in a still-life piece. Her works at Edgewood document a new direction but again expose Gangi’s ability to play with colors, geometric forms and objects.

Hirano, meanwhile, has more than 20 ceramic works in the show, including bowls, cups and vases, as well as small works portraying birds, specifically cranes. The pieces, both small and large, are made through varied methods: raku, wood-fired, and gas-fired. Hirano is interpreting the Japanese concept of wabi-sabi, beauty which is imperfect or incomplete.

She often works in earth colors, such as creating small bowls in a yellow-ochre color. Hirano also decorates the surface of some of her pieces with interesting elements, such as a ceramic piece of rope or a chain. And she applies other creative touches; one bowl has an opening in its top that can be interpreted as a portal or a door.

Stenson, the third artist in the show, makes necklaces, earrings, pendants and other types of jewelry, typically working with metal or stone. Look for her pendant, “Forest Floor.”

The exhibit isn’t focusing on newcomers to the local art scene; all three artists are veterans who have taken part in other shows. The Spirit of Color updates their work, accepts the differences that arise in a group exhibition like this, and presents pieces that will easily hold most viewers’ attention.