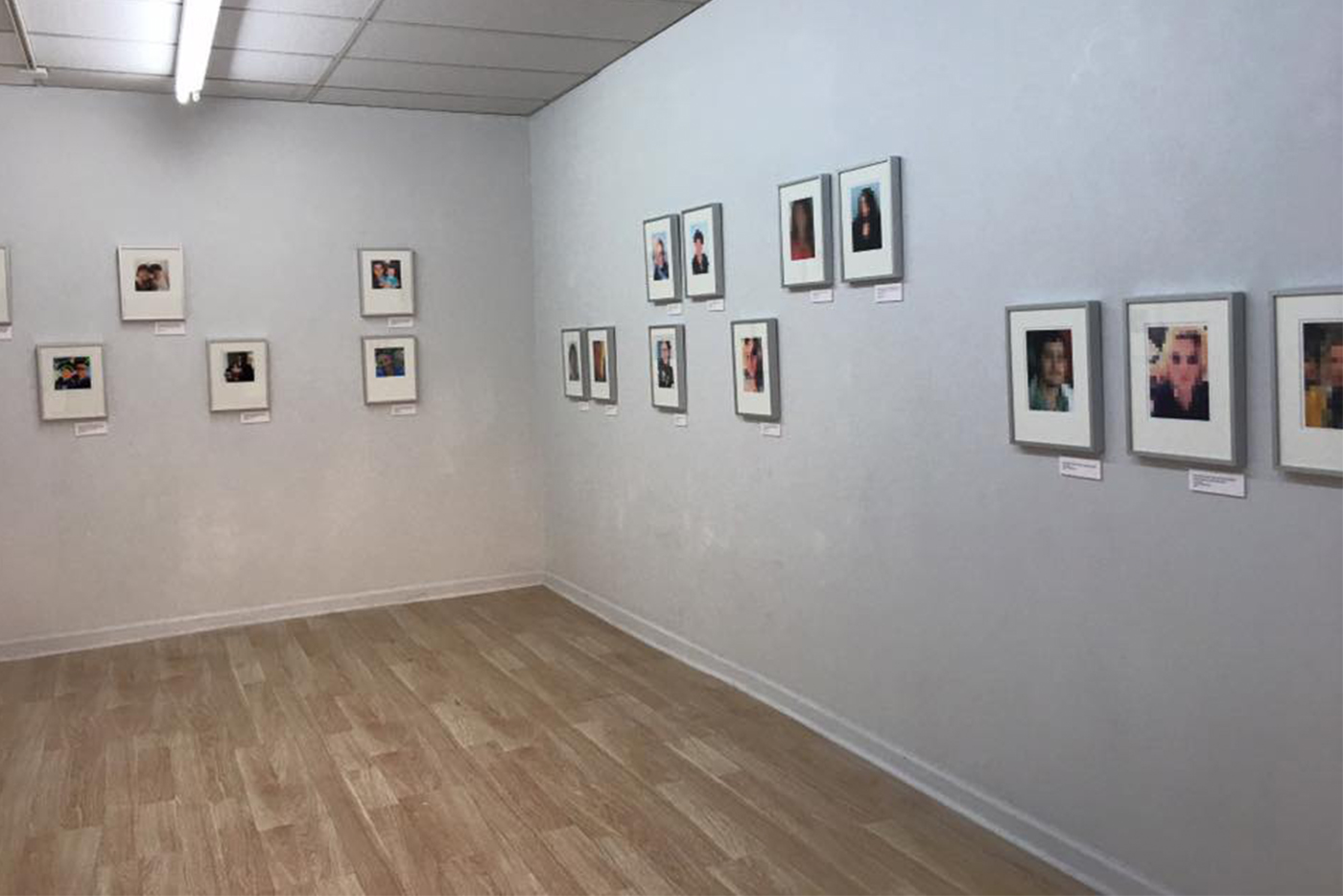 “The Daily Horrors” gallery hopes to persuade the mind at Apostrophe’S.

Mark Zawatski wants to test your imagination with The Daily Horrors, on display through Tuesday, Feb. 7, at Apostrophe’S, 1100 Oak St. The archive, as the artist refers to this specific work, features 50 manipulated photographs paired with headlines — some tweaked, others actual — to coax out the dark imagination that lies in the backs of our minds.

From 2015 through January 2017, Zawatski collected photos for the exhibit from international papers, especially the British-run Daily Mail with its abundance of material. The headlines and publication dates sit below the indecipherable photos. “Some of these are horrific stories and some are positive, but most involve a terrible situation,” he added.

If that isn’t eye-catching enough, the headline titles will generate winces: “Father, son and daughter sentenced to life in prison for cyberstalking and murder of ex-wife.” “Arkansas woman dies while broadcasting live on Facebook.” “Mother cooks daughter in oven.” “California student distributes video of sexual assault.”

Zawatski, a California native and Syracuse resident for about 10 years, teaches photography classes at Onondaga Community College as well as an occasional class at Ithaca College. Pictures, the process and the history behind the art are his thing, but he has a strong interest in the people behind the cameras and publications pushing the visuals with their articles.

He took note of a pattern within the pictures, and so he began to collect them. Names were not included or removed. The photos were censored, and the reasoning behind the pixilated faces or aspects didn’t make sense. “Sometimes the censoring was arbitrary: One person’s identity would be blocked out, but not the other’s,” Zawatski said.

Zawatski acknowledges that it is easier to put a story together with an image. “Newspapers are always trying to get you to read, to believe something and to interpret a story in a certain way,” he said. “I thought I could edit the pictures to erase that correlation. I decided to pixilate the whole photo instead of making a person see something specific or make a judgment.”

Apostrophe’S sits across the street from Schiller Park, adjacent to the Sedgwick neighborhood. Allison Kirsch and Holly Wilson opened the gallery in summer 2015 after they both graduated from Syracuse University. With a little help from their friends, they gutted the space and installed new floors and walls.

“We wanted to find a place where we could have studio space, and a place for people from the community and university to enjoy,” said Kirsch, a New Jersey native. “The (Syracuse) artist community is close-knit but I’m not sure people are fully aware of it. There aren’t enough bridges between people, and I think many of the galleries are working to build those bridges and make opportunities available.”

It was through the artistic community that Kirsch and Wilson were introduced to Zawatski, whose exhibit creatively and effectively showcases the dark alleyways of society. His Apostrophe’S display is separated by distinct sections of portraits, of fathers and sons, family photos and then a group of mother-and-child features.

“The titles of the stories don’t tell you everything, which mimics the pixilations themselves,” he said. “The titles are also manipulated. I wanted to turn them into these certain archetypes, to take away the personalization of the story and turn them into general scenarios or setups maybe anyone can relate to.”

Zawatski said a challenge he faced was that some of the stories and photos are so dark. “I want to step away from it, but it’s a little bit of a challenge to keep going with it and stick to the idea,” he said.

Relating to the masses, pulling from common trends, and the divide of authenticity vs. manipulation intrigues the educator-artist. “Most people who are into photography are using it as a truthful vessel. I like to question that, to cause trouble,” Zawatski said. “Art is about saying or doing things that you cannot normally say in real life.”

He does have other works in progress, such as one pertaining to internet communities that rides on the idea of truth in photography.

“I scanned artificial flowers and manipulated each one of them. It’s a reference to classic photography,” he said. “The first book of photography featured cyanotype prints by Anna Adkins. She laid flowers on pieces of photographic paper to make impressions. They were considered scientific documents.” To emphasize his digital theme, he’s using a scanner to make the floral impressions.

As for the two young Apostrophe’S gallerists, they’re keeping their minds and doors open. “The goal is to work with a variety of people throughout the community, to find and share contemporary art,” said Kirsch. “In May we’re working with LaFayette’s Big Picture School again, and the students will be showcasing their photography.”