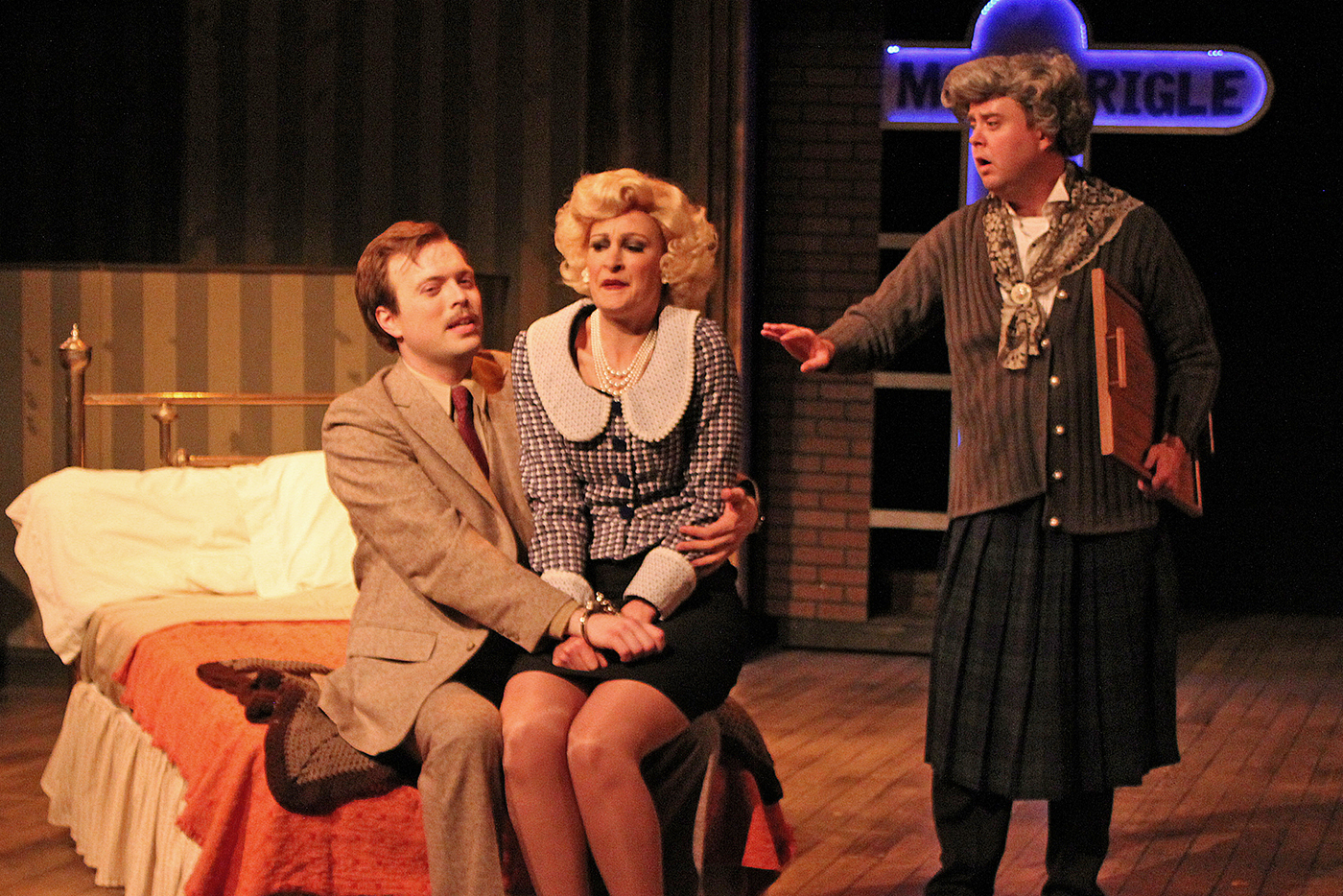 The smart and hilarious “The 39 Steps” gallops through the Cortland Repertory Theatre.

There’s no need to have seen movie director Alfred Hitchcock’s classic 1935 black-and-white comic thriller The 39 Steps (1935) to get any of the nonstop gags in the current stage spoof-tribute now galloping through Saturday, June 17, at Cortland Repertory Theatre.

Nor is there any need to read John Buchan’s espionage novel 39 Steps (1915), putative basis of the film, which Hitchcock largely ignored with the author’s permission. Then again, the show is so smart and hilarious, many audiences may want to dig out a DVD of the film to see if it can deliver as much fun.

Of all the manic, labor-saving comedies, where a twisting plot is squeezed together and two inventive players take on all the supporting roles, Patrick Barlow’s The 39 Steps has the most scintillating script. Some of the others are Around the World in 80 Days, Ken Ludwig’s Baskervilles and Travels with My Aunt.

Not only was the Hitchcock film already fast-paced, it established the template of the innocent victim on the run trope, the so-called “wrong man theme,” that the director used again and again, notably in North By Northwest. It guarantees tension. Further, most minor characters, like vaudeville performers or Scottish peasants, are primed for rapid-stroke caricature.

Even though you need never have seen the 1935 movie, Barlow expects that you might have seen quite a few other works from the master as their titles, like Strangers on a Train or Vertigo, have a way of turning up on the dialogue, always with a knowing nod from the speaker. Prerecorded music, expertly delivered by sound designer Seth Asa Sengel, makes extensive quotations from scores of different Hitchcock movies, many of them by Bernard Herrmann.

Action begins when handsome, suave Richard Hannay (James Taylor Odom) is watching a vaudeville show with a man doing memory tricks. In the ensuing panic he finds himself hand-in-hand with the Mata-Hari sounding brunette Annabella Schmidt (Leah Gabriel). She tells him that she has uncovered a plot to steal British military secrets and that she is pursued by assassins out to kill her. After some playfulness about where to sleep, which puts Hannay in an adjoining room, she is indeed done in. When he flees, a cleaning lady discovers Annabella’s body and screams, her voice instantly cutting into the whistle of a Scotland-bound train, one of Hitchcock’s most celebrated inventions. Hannay is aboard the train.

Odom’s Hannay is always a well-spoken gentleman, never a clown, but if the laughs of the two-hour-plus show were divided among its four players, he would have more than his share. Some of his success, of course, is shared by director Dustin Charles, long an actor at Cortland Repertory, often specializing in dialects. Odom is at ease in the accent and looks a bit like a younger, taller Richard Attenborough. The hilarity comes from playing against the dignity, as in the scene when he must speak before a Scottish political rally without knowing the candidate or the party he represents.

The female lead, Leah Gabriel, takes on several roles, first as the dark-browed murder victim, a lonely but available Scottish housewife, even briefly crossing the gender line as a guy. More importantly she becomes an incarnation of the Hitchcock blonde as Pamela, the frosty creature who is inevitably handcuffed to Hannay. Some of this is naughty fun, like how to eat together or go to bed. But Gabriel is no spoof; she really delivers the goods. Take the scene where she has to remove her wet stockings before a fireplace, v-e-r-y s-l-o-w-l-y, as her fire roars beneath the ice.

Everyone else is played by either Nicholas Wilder (tall, wide smile and ears) or Jason M. Shipman (shorter, round-faced). Both play all ages, both genders, all classes and ethnicities, sometimes shifting from one character to another in an instant. When Hannay gets off the train in Edinburgh, they become the police and the entire crowd. Wilder and Shipman have taken on these roles in prior productions and have learned how to make the impossible look simple. These guys are so terrific, audiences can be forgiven for thinking they are the whole show.