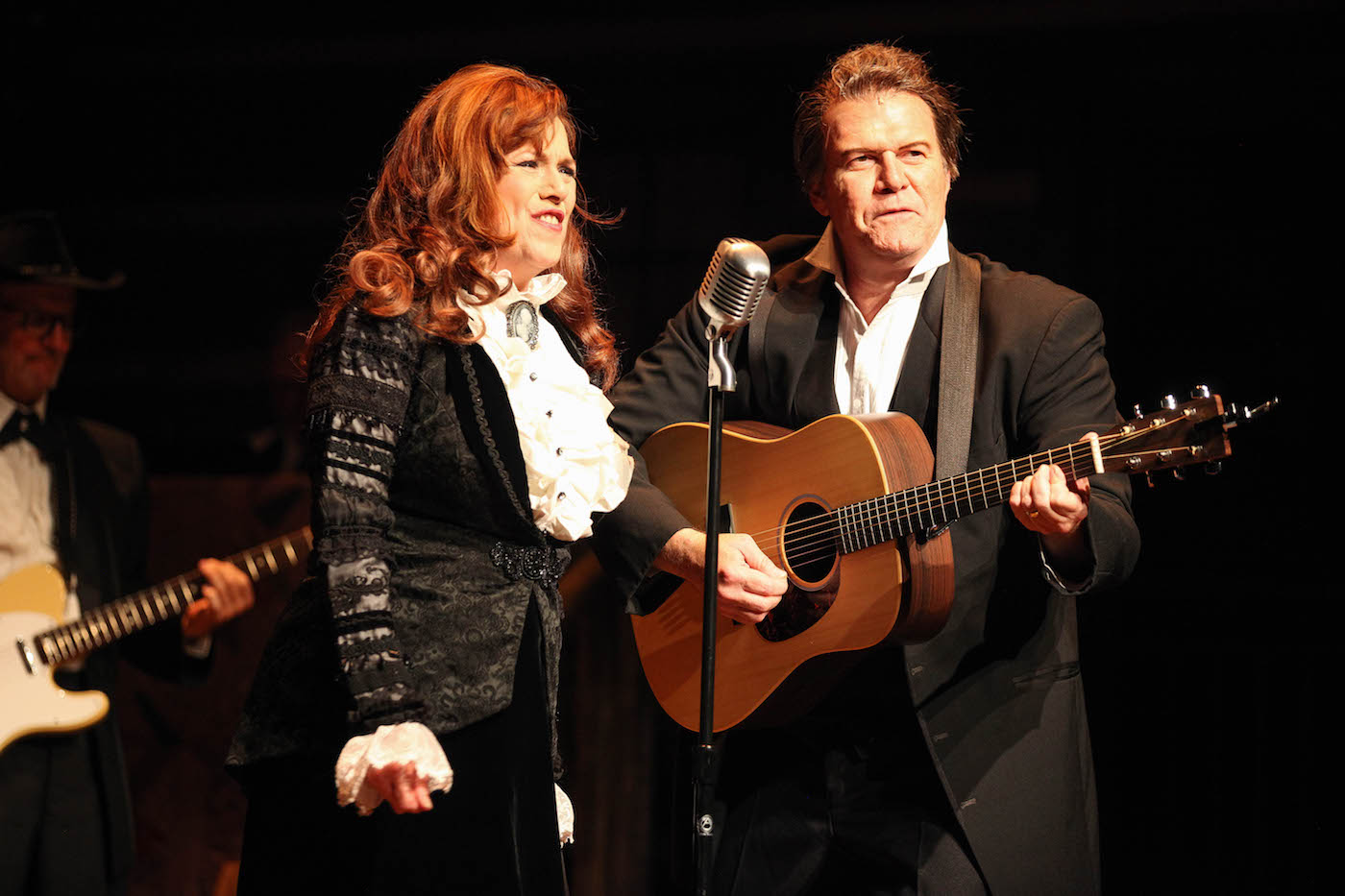 Seen from a distance, Ring of Fire: The Music of Johnny Cash might be mistaken as a gift from Little Rock. Syracuse Stage artistic director Robert M. Hupp’s previous post was with the Arkansas Repertory Theatre in Cash’s native state. Yet Ring of Fire was put together by Yankees and made its premiere at the now-defunct Arena Stage of Buffalo in 2006. In Maltby’s view, Cash was a regional composer and singer who can appeal to any audience.

The notion for Ring of Fire (running through June 25) came from William Meade, but the shaping force is Richard Maltby Jr., the wordsmith half of the team of Maltby and David Shire, creators of such upmarket shows as Closer Than Ever and Starting Here, Starting Now. Maltby also compiled Ain’t Misbehavin’, seen here in March. Structurally the two shows have much in common.

Both Ain’t Misbehavin’ and Ring of Fire present wide selections of a composer’s work, tell much of his life’s story and argue strongly for his artistic significance. This is not the same thing as a “tribute show,” where, for example, four guys mimic The Beatles’ greatest hits. Johnny Cash’s image often appears projected on a screen, he is constantly evoked, and more than one of the singers, especially baritone Brian Mathis, sound quite a bit like him. We learn his words, including confessions of failure. But no one ever impersonates Cash. He is never a character on stage.

With 10 people before us and high production values, Ring of Fire is a more theatrical offering than a mere jukebox musical. Nearly everyone sings eventually and plays a musical instrument, but four are the principal performers: tall Brian Mathis, young Benjamin D. Hale, red-haired Allison Briner-Dardenne and brunette Trenna Barnes. They take on most, but not all, of the singing and supply narrative interludes about Cash’s life. Six male musicians are always on stage and sometimes take part in the action, such as wearing the costumes of chain gang members in “Going to Memphis.”

Perversely, while the program lists all the musical numbers it only cites the composer and copyright holder but does not name the performer. This makes it hard to give credit where it is due, although the breathtaking bass solo by John W. Marshall at the opening of the second act separates him from the crowd. Seeing the credits, however, allows us to realize that Cash did not write every song with which he is identified. Lyrics for the country music spoofs, “A Boy Named Sue,” come from Shel Silverstein, and “Flushed from the Bathroom of Your Heart” are by Jack Clement.

The narrative begins with Hale’s solo, “Let the Train Whistle Blow,” with sound designer Jonathan Herter recreating that now-gone lonesome moan from the steam locomotive. Poverty and living on the wrong side of the tracks was a permanent part of Cash’s identity, even after his rise to fame at the Grand Old Opry, international celebrity and affluence. Blue staters should note that although country music is sometimes weaponized by the right, the only political note in Ring of Fire comes in Cash’s gratitude for a New Deal program that allowed his family to homestead.

Allison Briner-Dardenne appears more often in the first act, often with earthy passion, as in “I Still Miss Someone,” one of the most affecting numbers of the show. Trenna Barnes’ upper register can flirt with a coloratura soprano or yodeling, and she snags the songs most associated with June Carter Cash, the love of Johnny’s life, such as “Cry, Cry, Cry” or her half of the title duet, “Ring of Fire.”

Maltby does not present Cash’s music chronologically, as some songs written while the singer was in his 20s, like “I Walk the Line,” do not appear until toward the end of the second act. Not only is “Walk” too resonant to deploy early, but the compiler has organized the songs into 10 thematic scenes. One of those addresses Cash’s substance abuse, which ravaged him so that he looked older than his years when he died at age 71.

Gordon DeVinney’s costumes, with a change for every performer for almost every number, serve more to push the narrative than any other Syracuse Stage production this year. In the first scenes with the Cash family in the Depression, the entire cast looks as though it might have come from Caldwell’s Tobacco Road.

Eventually, black begins to predominate for both male and female performers. In a lengthy response to an interviewer, Cash explains that he wore black to show his empathy with the oppressed, the prisoners and the lost. One lengthy scene provides five numbers on prison life, including the grotesque black humor of “Delia’s Gone,” although the singer never served time behind bars.

Director Randal Myler has assembled a polished backstage team, starting with music director Jeff Lisenby and choreographer Denise Patton, and featuring scenic and projection designer John Iocovelli to enhance performances that originally grabbed listeners merely by emanating from a radio or phonograph. What started as recital becomes a drama to embrace the Man in Black, a white guy with soul.