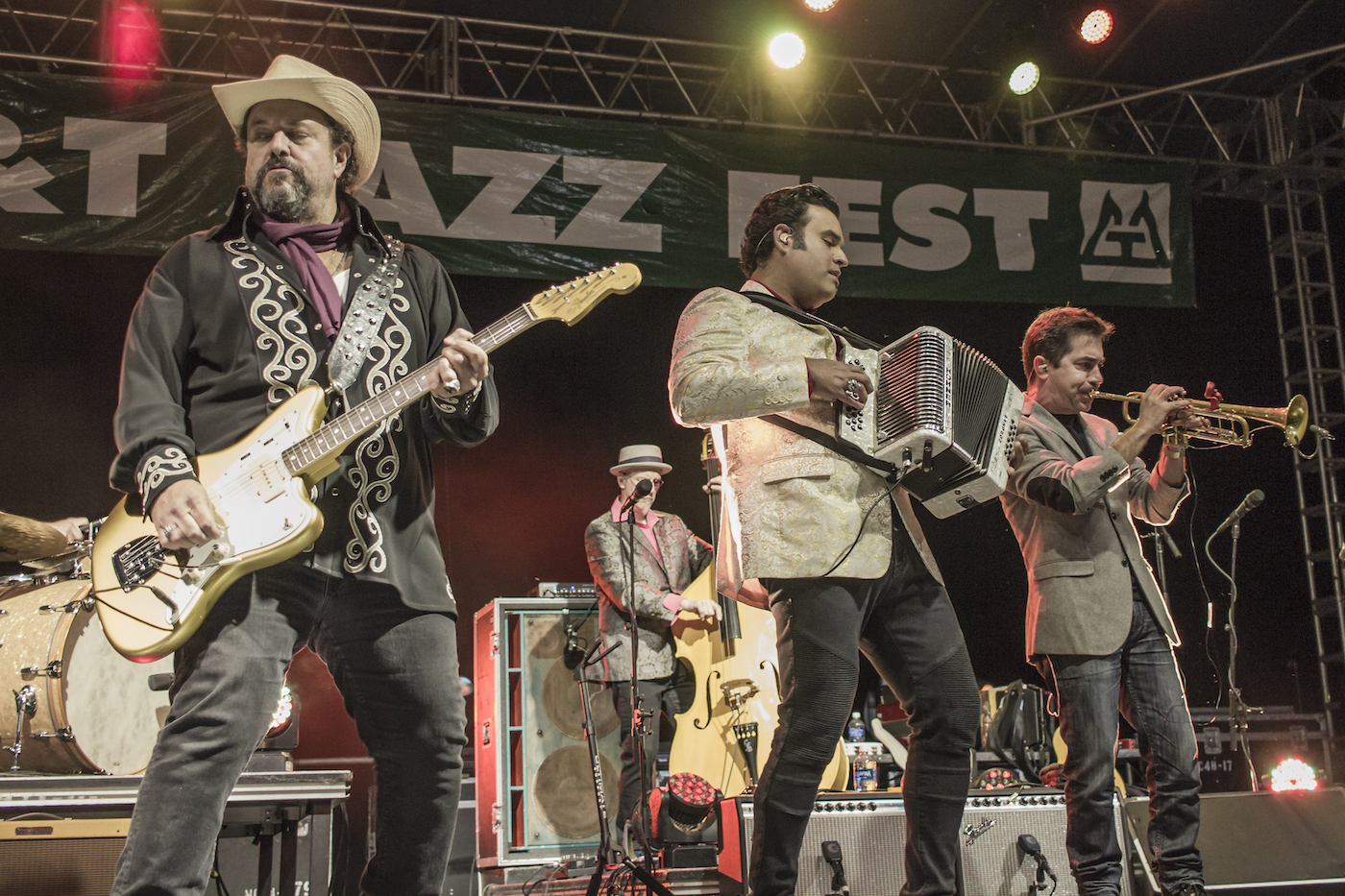 At the end of his marathon two-hour set on Saturday, June 10, M&T Syracuse Jazz Fest headliner Todd Rundgren appeared spent, now dressed in a white butler’s jacket, urban camo skinny jeans, and barefooted, as Jazz Fest director Frank Malfitano induced the throng before them to “give it up.”

As if it were necessary. Rundgren and his stellar band, the Hot Toddies (get it? Hot Todd-ies?) had done just that: delivered a power performance that was relentless in its delivery, fascinating in its diversity, enigmatic, familiar, bizarre and compellingly entertaining, depending on the moment. Not jazz at all, but that seemed to matter to no one. Jazz fest directors everywhere have long recognized the necessity of variety in order to appeal to the widest audiences, and the 2017 Syracuse Jazz Fest held at the Onondaga Community College campus was no exception. 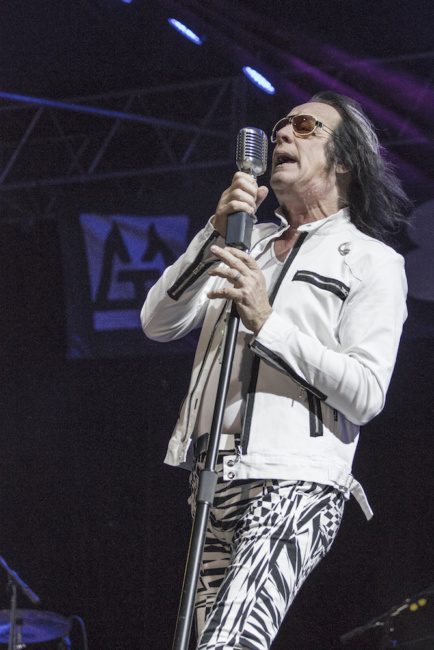 There was jazz of several stripes, of course, and in an essential way, it characterized, if not defined, the two-day event. Earlier on Saturday’s schedule, the Rebirth Brass Band, a staple at the Maple Leaf Tavern in New Orleans held forth, pounding out the pomp and strut of the Mardi Gras. Essentially a second-line street band, Rebirth’s non-electric music carried an accelerating march cadence with the joyous, celebratory thump of a parade that has no end.

Rebirth was followed by Canen, the 14-year-old jazz singer from Ithaca, who stated her precocious maturity with a set of standards and blues, including Charlie Parker’s “Yardbird Suite,” a challenging bebop classic, all of which were enthusiastically and respectfully received by the gathering crowd. Coached by Ithaca’s pre-eminent jazz diva, Cookie Coogan, Canen presented a relaxed familiarity with a repertoire unfamiliar to most aspiring singers of her vintage.

A day earlier the promising trumpeter Nick DiMaria brought his ensemble, the Manhattan Jazz Alliance, to the same Extraordinary Talent Stage (presented by WSYR-Channel 9’s Carrie Lazarus) for a set of bebop, ballads and blues, giving obvious satisfaction to the bona fide jazz fans in the crowd. Formerly of Notified, the local jazz youth movement that had appeared at Jazz Fest 2016, DiMaria shared space with his Manhattan School of Music bandmates and acquitted himself notably on familiar standards as well as an esoteric composition by the avant-garde saxophonist Sam Rivers.

And there was western swing, the jazz-folk amalgam of the 1930s when Asleep at the Wheel took the stage following Canen. Opening their 75-minute set with Cindy Walker’s “Cherokee Maiden,” the venerable ensemble, now in its 47th year, buzzed through a repertoire of Depression-era hits by Bob Wills (“San Antonio Rose,” “Faded Love”) and more recent fare (“Route 66,” “I Hear You Talkin’”), giving everything a joyous bounce. And, to everyone’s surprise, they segued into a slice of Thelonious Monk’s quirky blues, “Straight, No Chaser” in the center of the upbeat shuffle “Choo Choo Cha Boogie.” Their set rode into the sunset, literally, with a sing-along rendition of “Happy Trails,” the signature sign-off from singing Hollywood cowboy Roy Rogers.

But if Jazz Fest was to validate its claim as a jazz festival, it was thanks to Ramsey Lewis, the 82-year-old pianist and composer who took the stage on Friday, June 9. Anchoring the Steinway, Lewis led his Electric Quintet through a set of carefully tailored grooves — some Latin, others rhythm’n’blues flavored — all focused on the character of the melody, devoid of flamboyance and posturing. Judiciously sparing with both his rhythm and harmonics, Lewis’ solos were pensive and carefully measured, as were his steps, drawn from a rich legacy of performance, while his band quietly ticked away behind him.

A slow, wistful blues carried the set, achingly sparse and deliberate, with Lewis focused on finding something new, or, alternately, something tried and true. Occasionally tossing in a quote from another piece, a dense, dissonant chord or two, or a playful sprinkle of notes, Lewis carefully avoided the redundant, stock phrasing so common in many blues performances. His major hit, “The In Crowd,” didn’t figure into the 75-minute set until the encore.

But jazz fests are never all about jazz, and other elements drew their own responses. UAB-Kings of the Fall brought their vocal harmonies and choreography, songs of Motown and dance steps threatened with extinction by hip-hop, to the stage on Friday. And Soft Spoken, a heritage staple on the local rhythm’n’blues scene, featuring Donna Alford, arguably the queen of local soul, interpreted Stevie Wonder, Michael Jackson and James Brown to open Saturday’s show.

Friday’s music also featured Marc Broussard, the Louisiana native singer-songwriter steeped in the vocal traditions of Memphis and Muscle Shoals. With a voice that extended from a guttural drawl to an anguished screech, Broussard alternately channeled Sam Cooke, Otis Redding and even Jackie Wilson. 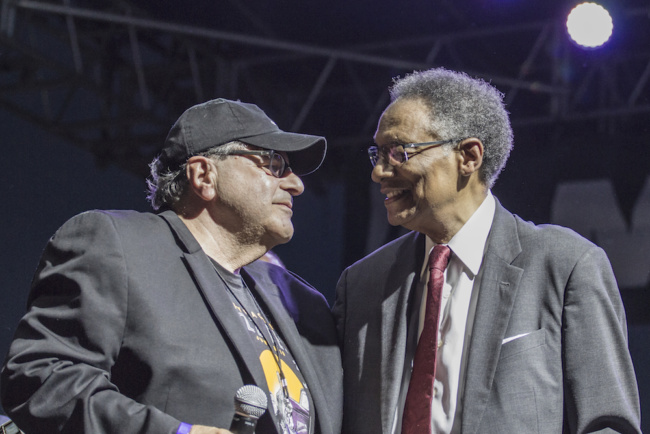 Back for the second consecutive year to close Friday’s show, The Mavericks delivered just what everyone expected: an elongated, pumping pulse of original hits that had the crowd jamming the stage and dancing in the aisles. Defined by a mixture of Cuban rumba, Mexican norteno and tejano elements together with blues and Americana roots, The Mavericks’ music proved irresistibly propulsive, giving everyone exactly what they came for: a carefree groove of what drummer Paul Deakin described as “songs of misery with happy melodies.”

The encore, an eventuality written in stone with this band, gave further voice to singer Raul Malo’s operatic tenor with Neil Young’s “Harvest Moon,” and then with Chuck Berry’s “You Never Can Tell,” and finally their signature rave-up, “All You Ever Do is Bring Me Down,” a song that has exactly the opposite effect.

Headliner Rundgren’s closing performance proved just as riveting, if for vastly different reasons. With the band clad in dark suits, ties and sunglasses and strewn across the back of the stage, the cast had the ominous aura of a Secret Service detachment.

In contrast to The Mavericks’ happy-go-lucky delivery, Rundgren’s show was often starkly presented and cryptic, with a certain darkness: part pageant, part Vegas revue, part political forum. Time, truth and the pressing need for political action were strident themes, pantomimed by his dancer-singers, the Hot Toddies, Grace Woo and Ashle Worrick. It was pressing business with frequent costume changes and a consistent urgency.

Eventually the veteran (nearly 70) performer, a father of three including a son named Rebop, morphed into his old self and reprised a handful of his familiar, catchy tunes, prompting the crowd to jam the stage and hang on his every move and word. Like Ramsey Lewis and The Mavericks before him, Rundgren withheld his biggest hit, “Hello It’s Me,” for the encore.